from Wikipedia, the free encyclopedia
Battle of Landeshut
Part of: Seven Years War 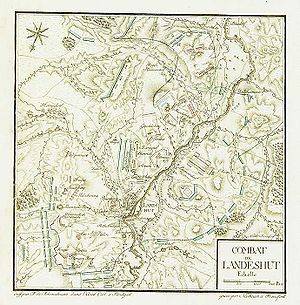 The Battle of Landshut on 23 June 1760 was a battle between Austrian and Prussian troops during the Seven Years' War ( 1756 - 1763 ), which with a heavy defeat of 12,000 Prussians under Lieutenant General Heinrich August de la Motte Fouqué against 28,000 Austrians under General Ernst Gideon of Laudon ended.

After the heavy losses of the war year 1759 with the battles of Kunersdorf , Kay and Maxen lost for Prussia , the strength of the Prussian field army sank from 125,000 to just 100,000 soldiers. Frederick the Great used the winter of 1759 to 1760 to increase the strength of his battered and demoralized field army to 110,000 soldiers and to rebuild their morale, so that in the spring, despite all adversities, 10,000 additional soldiers were ready for action in the field army of Prussia. With this, Frederick the Great planned the campaign of the year. Almost 15,000 of these soldiers were gathered in Silesia under the command of Lieutenant General Heinrich August de la Motte Fouqué - a friend of Frederick the Great from his Crown Prince's time - of which the masses near the fortified town of Landeshut could control the routes from Silesia to Saxony and Bohemia and the Prussian Main army under Frederick the Great with Silesia or with the Prussian army on the Oder under Prince Heinrich of Prussia.

Position of the Prussian corps

The Prussians camped with 12,000 soldiers on the hills off the provincial hat, with the left wing on the Doktorberg, the right wing on the Blasdorf mountains. From there, after the arrival of further reinforcements, Fouqué wanted to march in the direction of the recently besieged fortress Glatz . Frederick the Great later said of Fouqué's position: … the correct occupation of this area would of course have required three times the number of troops. In addition, four infantry battalions were deployed in the direction of Schweidnitz to enable them to retreat to the protection of this fortress.

Advance of the Austrians

General Laudon , who had set out from Bohemia with 40,000 Austrian soldiers against the fortress Glatz, learned of the Prussian massing of forces. While 12,000 Austrians were to continue besieging Glatz, General Laudon and the remaining 28,000 men set out via Johannesberg and Wüstegiersdorf to attack the troops under Fouqué. The Austrians reached the Prussian positions near Schwarzwaldau on June 22nd . The Prussians stood on the hills in front of them, the left wing on the Doktorberg and the right wing on the Blasdorfer Berg, whereby they took two hills in the Blasdorfer Berg in a stroke of the night.

The battle began with a surprise attack at night around 2 a.m., when Austrian artillery set up on the two hills opened fire on the Prussians. At the same time, the Austrians attacked from different directions - as with Hochkirch and Maxen . The first attack column of General Ludwig von Naselli stormed with the brigade of Lieutenant Colonel Graf Jakob Graf d'Alton against the Prussian position on the Doktorberg, while Colonel Graf Kinsky embraced his cavalry and appeared in the rear of the enemy. The second column under General von Ellrichshausen drove the Prussians down from the Buchberg at the same time. The first and second column was followed by FML Joseph di Campitelli, a third column seized the Mummelberg. In vain did General Fouque send a brigade under Colonel Rosen to the defeated left wing, which was forced to retreat by heavy cannon and small gun fire. The almost three times superior Austrians succeeded in gradually pushing back the Prussians, with both sides suffering heavy losses. When General Fouqué saw the bulk of the Austrian cavalry approaching, he decided to vacate the positions and withdraw in an orderly manner. The Prussian infantry repeatedly defended themselves against Austrian attacks in the next few hours until all the ammunition was used up. Towards the end of the battle, 1,900 Prussian cavalrymen fled to Schweidnitz. The Prussian infantry was subsequently ridden down by the Austro-Saxon cavalry. At this point the battle lasted eight hours, from two in the morning to ten in the morning.

In addition to 8,000 Prussian prisoners, the Austrians fell into their hands with 68 guns and 34 flags. In one fell swoop, 10,000 Prussian soldiers were canceled for further use. This time, however, 3,000 Austrians were also sidelined due to death or wounding.

As far as is known, the troops captured at Landeshut were given the names of the old Prussian army. The name of the respective chief of the regiment or the commander of the battalion is written in italics. The grenadier battalions were named after their commanders; in addition, it was partially stated from which regiments the grenadier companies were drawn to form the battalion. If one of the regiments was a so-called fusilier regiment, this is also noted.

Even though 10,000 Prussian soldiers had disappeared from the strategic map, the Battle of Landeshut is much less known than Maxen. While the Prussian troops broke up during the battle when Maxen caught the fish, the Prussians held out until the ammunition was used up. In contrast to Lieutenant General Friedrich August von Finck, Lieutenant General Fouqué did not come before a court martial because of his behavior.