from Wikipedia, the free encyclopedia
Assault at Domstadtl
Part of: Seven Years War 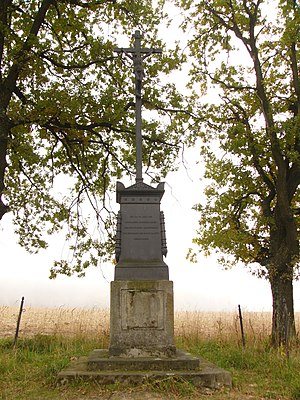 Monument from 1858
The information on troop strength and losses can vary in the literature.
Seven Years War (1756–1763)
Eastern theater of war 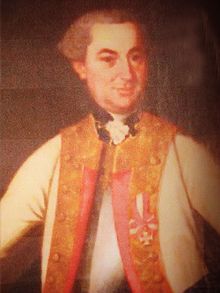 The attack at Domstadtl (also called battle , battle or affair at Domstadtl ) took place at Domstadtl at the end of June 1758 during the Seven Years' War . The Austrians succeeded in defeating the cover of a large Prussian supply convoy, destroying the convoy and capturing the wagons. For the most part, the attacks did not take place in a formed order of battle, but rather in the manner of a small war from an ambush. As a result, Frederick II was forced to break off the siege of Olomouc .

Friedrich II besieged the strategically important fortress town of Olomouc in Moravia . A fall of the city might have opened the way to Prague and Vienna . However, the Prussian army was dependent on supplies from the areas it ruled. On the Austrian side, Daun recognized the vulnerability of the enemy and tried to stop supplies from Silesia.

In Opava , a large Prussian transport collected. This consisted of thousands of transport vehicles. Sometimes the number of 4000 is mentioned. General Laudon was ordered to await the transport with his troops. Another corps under Siskowitz with 7,000 men received a similar order. The action was covered by another corps. Daun tried to use maneuvers to distract Friedrich II and make him believe that he was looking for a battle. This deception worked and therefore the king did not send a strong cover against the transport. Since Laudon's march was also known to the Prussians, General Zieten , among others, was sent with 5000 men towards Troppau.

The transport left the city on June 26th. It was protected by a strong cover under Friedrich Wilhelm von der Mosel . A day later he had to stop to collect the train again. Laudon arrived in Sternberg that day and positioned himself so well in the area that contact between the transport and Friedrich II was broken. Laudon had to expect that the king would then send a stronger force from Olomouc to provide support and marched on the 28th to Gundersdorf . There he occupied the heights. As the transport approached, although still outnumbered, he decided to attack. The Prussians responded with defensive measures and occupied some hills from which they could use their guns. The losing battle lasted five hours. Austrian hussars destroyed 100 wagons. Laudon withdrew because he feared Zieten might appear in his back.

The attack caused considerable confusion, especially among the wagoners. Even when Ziethen and his troops joined the transport, it took the entire day to restore order to the train. Due to this delay, Siskowitz was able to achieve a position between Altliebe and Domstadtl and to agree with Laudon on how to proceed. On the 30th the convoy started moving again. At times it stretched over a distance of forty kilometers. The cavalry guarded him on the right and the infantry on the left.

The Austrians, hidden by bushes, allowed the vanguard and about 100 wagons to pass. Then General Siskowitz attacked the car from the left. Cannon shots killed the horses of the first wagons and this brought the whole train to a halt. Zieten had a wagon castle built. These were manned with three battalions of infantry and six guns. With some of his soldiers he attacked the Austrians and threw back some units. He was driven back into the wagon castle by the Austrian hussars, and Laudon also attacked from the right. He exploded numerous powder trucks and created a lot of confusion throughout the train. The convoy broke into two parts. Part of the Prussian troops tried to protect the transport. General Zieten and most of his troops were cut off and could not intervene. He had to retire to Troppau.

About 250 wagons initially escaped, but were later attacked again. Another 50 cars were lost, so that only 200 cars arrived before Olomouc. A total of 1200 cars fell into the hands of the Austrians. The rest had been destroyed. In addition, General Puttkammer was captured with 650 men.

Due to the successful attack, the Prussians ran out of supplies off Olomouc. This forced Frederick II to break off the siege. Thus an advance into the heartland of the enemy had become impossible.

To commemorate the events, several writings were written for the anniversary in 1858 and a monument was unveiled in Domašov. Another monument is located near Guntramovice .