Flag of the Line Infantry during the Seven Years' War. On one side are the initials MT for Empress Maria Theresia.

The Imperial Army , Imperial Troops , Imperial for short (from 1745 Roman-Imperial-Royal or Imperial-Royal ), were the soldiers of the Roman-German Emperor in the early modern period . The Imperial Army is to be distinguished from the imperial army , only with the consent of the Reichstag could be used. The Imperialists were almost always the troops of the Habsburg emperors from the House of Austria , which is why they were increasingly referred to as "Austrians" in the 18th century, although the troops were recruited throughout the empire.

For the Empire and the Habsburg Monarchy 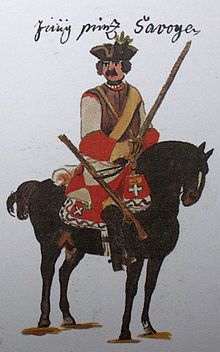 The Habsburg monarchy presented almost throughout the Holy Roman Emperor since the early modern period. Kaiser was a title tied not so much to a territory as to a person. In the tradition of the Roman emperors , the emperor had a universal claim recognized in Latin Europe .

Accordingly, the Imperial Army was a troop set up by the emperors, with privileges throughout the Holy Roman Empire . In contrast to the territories, the emperor u. a. the right to recruit troops in the imperial cities . Only the electorates were excluded from the imperial recruitment of soldiers. All other territories could not prevent the recruitment .

Independent of the imperial advertising, the Reichstag set up the Reichsarmee , the "troops of the Reich". 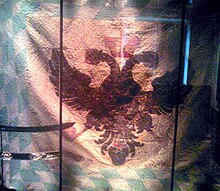 An imperial Bavarian flag from 1745. The imperial eagle on a golden background was sewn onto the Bavarian flag. Musée de l'Armée , Paris

In the imperial interregnum 1740–1742, Habsburg troops were no longer the army of the emperor, but of the queen of Hungary . In the War of the Austrian Succession , Queen Maria Theresa and with her the Austrian House of Habsburg fought for survival in the European system of power. Her fight for the Roman imperial dignity for her husband Franz Stephan von Lothringen was initially lost. With the takeover of the imperial crown by the Wittelsbacher Karl VII. 1742 to 1745 the troops of the Electorate of Bavaria became imperial for a short time. One year after losing their imperial dignity, the Hungarian queen and Austrian archduchess prescribed their troops green instead of gold for the officer's sashes and the troop flags. Gold has always been considered an imperial attribute. 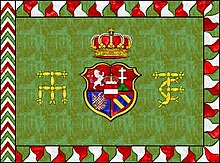 The royal Hungarian flag of the Habsburg troops. The imperial eagle was no longer allowed to be shown in 1743.

After Franz I was elected Emperor, the husband of Maria Theresa, the troops received the imperial symbols back. Maria Theresa allowed herself to be called Empress, but she did not value her coronation as Empress. This was also expressed in the naming of their army, which was now called “Roman imperial-royal”. The term Austrian became popular in the Seven Years' War (1756–1763) and in the subsequent disputes in the Bavarian War of Succession (1778/1779), in the Russo-Austrian Turkish War (1787–1792) and in the coalition wars . The Prussian and Protestant journalism increasingly lost interest in a universal imperial idea , which has long recognized a special position of the imperial troops. Maria Theresa's son, Emperor Joseph II , also provided less and less support for an imperial imperial policy with his centralizing reforms that promoted an Austrian territorial state. The Austrian imperial dignity was introduced as early as 1804 . It was not until two years later that the Austrian emperor also gave up his Roman-German emperor. Up until 1871 there were only Austrian imperialists in Germany .

Use of the Habsburg imperial army

In the early modern period, imperial troops fought in all wars affecting the empire, mostly in association with the imperial army and additional territorial troops.

The Thirty Years War resulted in an extremely strong armor for the emperor. In 1635 the army reached its highest level of 65 regiments on foot, with a nominal strength of 3,000 men each. A total of 532 regiments were established and dismissed during the war. In 1648 only 9 regiments on foot, 9 on horseback and one dragoon regiment remained .

Gradually a standing imperial army developed out of the numerous armed conflicts . Of 49 regiments drafted for the Second Northern War, 1660 remained 23. The sixties of the 17th century brought 28 regiments, the following decade another 27 regiments.

The army took part in the following wars and campaigns:

This list ends with the resignation of the Roman-German emperor by Franz II in 1806.