In the 17th century, with the effects of the Thirty Years' War and the growing power of the sovereign principality (according to the ideas of absolutism ), the decline of the estates began in Bavaria as well . In 1669 the state parliament was convened for the last time.

While Maximilian's successor, Elector Ferdinand Maria, renounced the imperial crown in 1657 due to his cautious policy towards the Habsburgs , his son Maximilian II. Emanuel , initially as an ally of the Viennese court, later through an alliance with Louis XIV , strove for a higher rank. The alliance with the King of France against the Emperor brought the Bavarian electoral ban , the execution of which led in 1704 to the Austrian occupation of Bavaria in the War of the Spanish Succession and to the temporary loss of the Bavarian electoral dignity and the Upper Palatinate to the Palatinate Wittelsbacher Johann Wilhelm . The Imperial Administration in Bavaria exercised governmental power in Upper and Lower Bavaria for ten years. Only after France had come to an understanding with the victorious naval powers England and Holland could it also bring about the restoration of Bavaria in the interests of balance in the empire. In 1715 Max Emanuel was able to return to Bavaria as elector. His son and successor Karl Albrecht received the Bohemian royal crown in 1741 and the imperial crown in 1742 , but at the cost of a renewed Habsburg occupation of Bavaria during the War of the Austrian Succession . Elector Maximilian III. In 1745, Joseph gave up the great power ambitions of his predecessors and devoted himself to internal reforms. 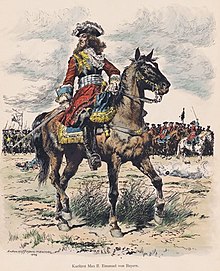 In 1778 it came after the extinction of the Bavarian line of the Wittelsbach family for War of Bavarian Succession , and Bayern was under Elector Karl Theodor of the Palatinate united to that in personal union also the Rhenish duchies of Jülich and Berg were. After the merger, the area was called Pfalz-Baiern . After Bavaria fell to Karl Theodor as a result of this inheritance, one of the electoral dignities ( Causa palatina ) became extinct , while the other remained. Which cure expired was a point of contention in Reich journalism at the time. Johann Jakob Moser correctly referred to the fact that from 1778 onwards, only "Palatinate" was called in the Electors' College. On the other hand, the entire remaining Electoral Palatinate , which was not yet occupied by France , had to be ceded to Baden in 1803, although the Duke of Bavaria naturally remained elector. After the Peace of Westphalia it was then also regulated that in the event of a collapse the newly created, then eighth electoral dignity for the Palatinate would expire. The electorate existed until 1806 when Bavaria was proclaimed a kingdom . Duke and Elector Maximilian IV. Joseph was proclaimed as Maximilian I Joseph on January 1, 1806 in Munich as the first Bavarian King. The formal exit of Bavaria from the Reichsverband, renouncing the electoral dignity, did not take place until July 1806 with the Rhine Confederation Act .

Position of the Bavarian Electors in the Empire 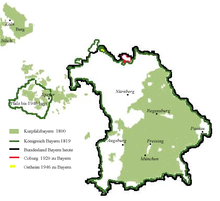 The ore clerk's office was associated with the Palatinate electoral dignity . When Frederick V of the Palatinate lost the cure in 1623, the arch trusteeship fell to Bavaria and in 1706, as a result of the ostracism of the Elector of Bavaria, again to the Electoral Palatinate, in 1714 again to Bavaria, which held the office until the Bavarian Wittelsbachers died out (1777), when this ore office again fell to the Palatinate branch of the Wittelsbachers until the dissolution of the empire in 1806. Due to his electoral title, the elector of Bavaria was a member of the council of electors in the Reichstag ; he also held the dignity of imperial vicar together with the elector of Saxony , which he exercised in the times of vacancy after the emperor's death 1657–1658, 1740–1742, 1745, 1790 and 1792. In the Council of Princes in the Reichstag before the personal union of 1777, he held the votes as Duke of Bavaria and (after 1770) the Princely Landgrave of Leuchtenberg . In the Bavarian Reichskreis he was, together with the Archbishop of Salzburg , head of the Bavarian District, a district that was territorially dominated by the Electorate of Bavaria. The Bavarian elector also held lands in the Swabian district . After 1777 the electoral dignity of the Palatinate ceased to exist in accordance with the regulations of the Golden Bull and the Peace of Westphalia due to the collapse of the ruling house. The Palatinate Wittelsbacher now ruled the Duchy of Bavaria, Pfalz-Neuburg , as well as the Electoral Palatinate , the Duchies of Jülich and Berg , Pfalz-Sulzbach , Pfalz-Veldenz and other smaller areas.

Already after the reunification of the partial duchies of Bavaria-Munich and Bavaria-Landshut and after the enactment of the Primogeniture Act , the duchy was reorganized in 1507 for administrative purposes into the four tax offices of Landshut , Straubing , Munich and Burghausen , which lasted until 1799/1802, with Munich and Burghausen the "Oberland", Landshut and Straubing the "Unterland". Later, with the win of the Upper Palatinate in 1628, the Amberg Rent Office was added. In 1779 the Innviertel ( Innbaiern ), which had been part of the Burghausen Rent Office , was lost to Austria. As an administrative unit at the lowest level, the electorate held the chairmanship .

In the course of the Napoleonic wars , extensive areas were attached to Bavaria. The associated increase in power was one of the reasons for Bavaria's proclamation as a kingdom. In the Treaty of Lunéville in 1801, Kurpfalzbayern, like other German states, had to renounce its areas on the left bank of the Rhine. It lost the Rhine Palatinate . The Duchy of Jülich also had to hand it over . On the basis of the Treaty of Schönbrunn negotiated in 1805 , it left the Duchy of Berg on the right bank of the Rhine to France in 1806 in exchange for the Principality of Ansbach . As a substitute, however, Bavaria was able to compensate for its national territory through the mediatization and secularization decreed in the Reichsdeputationshauptschluss 1803 in exchange for Franks and areas in Swabia . In 1805 Bavaria was bound by the Bogenhausen Treaty to Napoleon's France . The defeat of Austria in the Battle of the Three Emperors of Austerlitz was followed by the Peace of Pressburg , which u. a. included the assignment of Tyrol and Vorarlberg to Bavaria.