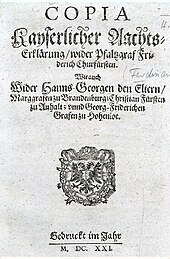 Imperial eighth of Emperor Ferdinand II from January 1621 against Elector Friedrich V. He lost his hereditary lands and the electoral dignity.

The imperial ban (also Empire spell or a short night or spell ) was a special form of Eight or the emperor, in the Middle Ages by the king early modern period imposed by the king or the emperor in cooperation with the imperial courts and the electors ostracism (Fried- and declaration of lawlessness) especially in the case of disobedience to summons or judgment, which extended to the entire area of ​​the Holy Roman Empire .

Before and during the Middle Ages , the administration of justice and the state sovereign administration were not yet sufficiently developed, so that court judgments could often not be enforced and the perpetrators had the opportunity to evade their responsibility. The ostracism appealed to the legal aid of the entire legal community: the perpetrator was found without rights, and anyone from the legal society who was able to do so could bring him to court or kill him.

Even in the first tribal societies of the Germanic peoples before the Great Migration , criminals - after their escape - were committed to offenses against religion, cult and in the army, e.g. B. Treason and desertion are outlawed and therefore placed outside of society (otherwise the death sentence would otherwise be threatened).

On the decision of the thing , in later times after the court ruling of the king or the court, they fell to the eight and were outlawed . They lost their legal capacity and anyone could - and should - kill them without penalty. Their body remained unburied. Her fortune deteriorated, anyone could get it. The later awarded medieval fiefdoms but fell to the king, who had pronounced night, or the feudal lord.

Only those who faced the court and punishment could break away from the eight. If he did not, in the Middle Ages, after a certain period of time ( year and day ) , he fell into disregard (also damnatio, proscriptio superior, überacht, Oberacht, ). It led to the defendant being completely unlawful and was initially not removable (later it was also removable).

Since imperial ban and ecclesiastical ban have been going hand in hand since 1220, the formula in eight and ban comes from this .

In 1519, Emperor Charles V had to make concessions for his election ( election surrender ). Since then, as emperor, he has not been able to impose the eight without first conducting an ostracism procedure. The Constitutio Criminalis Carolina regulated the imperial ban in 1532, it could be pronounced by the German king (since the 16th century also emperor ), by the imperial chamber court , by the court court of Rottweil (in its sphere of activity) and by the state peace courts .

In the further modern age the distinction between eight and but eight was lost. "Eight" was then mostly a slightly weakened form of medieval aberrant.

The eight was mainly imposed at in the early modern period

Persons who have been given the Reichsacht

The most famous personalities who have been given the imperial ban include:

The imperial ban could also be imposed on cities: