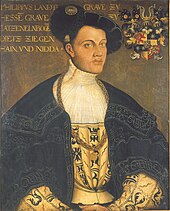 Philip I , called the Magnanimous from the House of Hesse (born November 13, 1504 in Marburg ; † March 31, 1567 in Kassel ), was Landgrave of the Landgraviate of Hesse from 1509/1518 to 1567 and one of the most important sovereign princes and political leaders of the age of Reformation and Renaissance in the Holy Roman Empire . On July 1, 1527 , Landgrave Philipp founded the Philipps University of Marburg, which is now named after him . 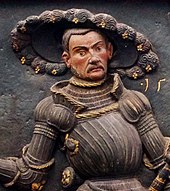 Landgrave Philipp I on the Philippstein 1542

Philipp von Hessen was born in Marburg in 1504. His father was Landgrave Wilhelm II (1469–1509), his mother was Anna von Mecklenburg (1485–1525). Since he was still a minor when his syphilitic father died in 1509, a bitter struggle broke out between the Landgravine and the Hessian estates and especially the Hessian knighthood for guardianship . From 1509 to 1514 Philipp lived in the household of the estate master and guardianship regent Ludwig I von Boyneburg in Kassel, while his mother lived on her Wittum in Felsberg . Anna obtained the reign herself in 1514 and obtained that Philip was declared of age by Emperor Maximilian I in 1518 at the age of 13½ . Philip initially kept his mother and her councilors with him, but fell apart after Anna remarried in 1519 from his mother. At the latest when he appeared with more than 400 armed men at the Worms Reichstag in 1521 , Philip presented himself as a self-confident representative of the Landgraviate. In the winter of 1522/23, Philipp, together with the Electorate of Trier and the Electoral Palatinate , subjugated the knight Franz von Sickingen , who had attacked Darmstadt in 1518 and who had been appointed by the Counts of Nassau to execute their claims on the inheritance of the Counts of Katzenelnbogen . At the same time, Philipp had the fortresses in Marburg, Kassel , Rheinfels , Ziegenhain and Rüsselsheim reinforced.

In 1523 Philip had Lutheran preachers expelled from the landgraviate. With the Hessian police order of 1524, however, Philipp already promoted Protestant teaching and became a pioneer of the Reformation . His stance in the German Peasants' War was also social reformist : although he had the peasants in the territories of the imperial abbeys of Hersfeld and Fulda crushed and the peasant army of Thomas Münzer near Frankenhausen, he also ordered inquiries about the grievances in the places involved in the uprising within his territory and had the abuses mentioned largely remedied. Philip refused to execute Anabaptists .

Seal of the University of Marburg with the image of its namesake Landgrave Philipp I, stamp from 1977

Philip of Hesse with Johann Friedrich von Sachsen, Schmalkaldischer Bundestaler 1546. With the taler the two federal heads celebrated the victory over the Duke of Brunswick.

In 1526 there was an alliance with Johann von Sachsen and other Protestant princes in the Torgau Bund . This strengthening of the princes led to the introduction of the Reformation in Philip's territory by the Homberg Synod in the same year , which not only led to the redesign of the worship service, but also to the abolition of the monasteries. The confiscated monastery assets were not only used for poor and sick welfare, but also in 1527 for the establishment of the University of Marburg and the Philippinum grammar school, which was founded at the same time . The university in Marburg was the first in Hessen and the second oldest Protestant university (the oldest Protestant university existed from 1526 to 1530 in Liegnitz, Silesia ).

In June 1528 he concluded the Treaty of Hitzkirchen with the Archbishop of Mainz, Albrecht von Brandenburg , in which Kurmainz finally renounced spiritual jurisdiction over Hesse. In 1529 he founded the Hessian Scholarship Institution . In the same year the Marburg Religious Discussion between the reformers Martin Luther and Ulrich Zwingli took place, from which Philip hoped to unify Protestantism. He was one of the princely representatives of the Protestant minority ( Protestation ) at the Reichstag in Speyer .

In 1531 Philipp became a co-founder of the Schmalkaldic League . In 1534, through military action in Wuerttemberg administered by Habsburg, which took a decisive turn with his victory in the battle of Lauffen , he succeeded in returning the expelled Duke Ulrich of Wuerttemberg to his country and, as a result, to introducing Protestantism in Wuerttemberg as well. In 1535 he founded a hospital near Crumstadt .

At the beginning of 1524 Philipp married Christine von Sachsen (1505–1549). In 1540, while Christine was still alive, Philip concluded a second, morganatic , marriage with the Saxon court maid Margarethe von der Saale (1522–1566). The reformers Martin Luther , Philipp Melanchthon and Martin Bucer approved his approach after some hesitation. The legend of the Count von Gleichen served as the justification . Melanchthon was present at the wedding at Rotenburg Castle . The discovery of this double marriage led to a serious crisis in the Reformation and brought Philip far-reaching political difficulties, because bigamy not only contradicted canon law, but was also punishable by the death penalty according to secular law .

Coat of arms of Landgrave Philip of Hesse

Relying on the emperor's benevolence, he offered Charles V to support him against France, the Ottomans and England and to thwart the alliance negotiations between his Saxon brother-in-law and France (July 1540). The emperor accepted the offers, which ultimately resulted in the Regensburg Treaty of June 1541: Philip promised on the one hand not to enter into an alliance with the French king Franz I or other foreign powers and to support the emperor militarily in the event of a war with France, on the other hand He promised to prevent the Schmalkaldic League from intervening in the war for the Duchy of Geldern and to prevent the Duke of Kleve from joining this Protestant military alliance. In return, the emperor assured "everything and everything that is, if he acted against us, our brother or against imperial law and order and the order of the empire [...], indulged and abandoned". However, Karl made an important exception: “unless it were because of religion that there was a common war against all Protestants”.

Postcard of the Landgraf-Philipp-Monument in Kassel from 1903

However, such a dispute occurred in 1546–47 with the Schmalkaldic War . After the Emperor's victory, Philip submitted and was imprisoned by him in the Spanish Netherlands for five years. During this time, the Landgraviate of Hesse was ruled by his eldest son Wilhelm, to whom Philip had assigned a Regency Council, consisting of his wife Christine, the Chancellor Heinrich Lersner and the councilors Rudolf Schenk zu Schweinsberg , Wilhelm von Schachten and Simon Bing .

The saying on the back of the Philippsthaler , which was coined in 1552, the year he was released from imperial imprisonment, refers to his release without renouncing Protestantism. However, it is often disputed that Philip commissioned this thaler. He is usually attributed to his followers.

In the last fifteen years of his life, Philipp took care of the administration of Hesse and promoted the unification of the Protestant parties. In addition, he tried to consolidate the country, which was heavily indebted after the Schmalkaldic War, including the introduction of a potion tax. By expanding the tax system, he transformed the Landgraviate of Hesse from a medieval domain state to an early modern financial state: In addition to income from the domains , taxes were established as a new pillar of state financing. Above all, Philipp pushed for the introduction of a wealth tax based on the productivity of the taxed person. Some of his initiatives and foundations such as confirmation classes , the State Welfare Association or the Althessian Knighthood still exist today. The Marburg Philipps University was only named after its founder in 1934.

The historian and librarian Arthur Heidenhain , who did his doctorate on Philip I, wrote about him in his dissertation:

“From the outset I would like to reject the opinion that the Landgrave's demand for tolerance was only a principle of political expediency: throughout his life, even when it was not politically useful to him, and could even endanger his reputation for orthodoxy the landgrave demonstrated an unprejudiced humanity that is far ahead of the times: one thinks of his leniency towards the peasants, the Anabaptists, the Jews, Schwenkfeld , who is persecuted everywhere, and his comrades; of the principle that he bequeathed to his sons in his will: Do not punish anyone for the sake of faith. "

The epitaph Landgrave Philipps in the Martinskirche in Kassel

Philipp died on March 31, 1567 in Kassel. The Landgrave's burial place in the Elisabeth Church, which belonged to the Catholic Teutonic Order until 1570 , was not available for burial, and so Philip was buried next to his wife Christine von Sachsen in the Martinskirche in Kassel. The tomb is considered to be one of the most important princely graves in Central Europe.

After Philip's death, Hesse was divided among his four sons from his first marriage according to his will and as a result noticeably lost its political weight: Hessen-Kassel with about half of the territory was given to the eldest son Wilhelm IV. , Hesse-Marburg with about a quarter of the Territory went to Ludwig IV , Hessen-Rheinfels went to Philip II , and Hessen-Darmstadt to Georg I. 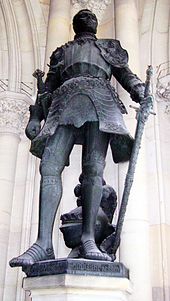 Statue in the Speyer Memorial Church

The sons received the title Count von Diez , but had no offspring themselves.

March 31st (not included in the official evangelical name calendar )