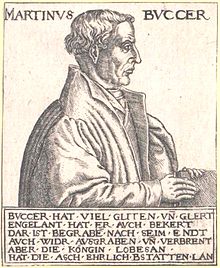 Bucer window in the Redeemer Church in Strasbourg

Martin Bucer , actually Martin Butzer or Butscher (born November 11, 1491 in Schlettstadt ; † March 1, 1551 in Cambridge ), is one of the most important theologians of the Reformation and is considered the reformer of Strasbourg and Alsace .

Martin Bucer was born in Schlettstadt (today Sélestat ), a Free City of the Holy Roman Empire . His father and grandfather, both named Claus Butzer († 1540), were cooper , his mother Eva Butzer was a midwife . They left Schlettstadt around 1501 to move to Strasbourg. Her son stayed with his paternal grandfather. Claus and Eva Butzer became citizens of the Free Imperial City on December 5, 1508 . After the death of his first wife, he married Margaretha Windecker.

Under the care of his grandfather, Bucer joined the Dominican order as a monk at the age of fifteen and enrolled at Heidelberg University on January 31, 1517 . On April 26, 1518, on the day of the Heidelberg disputation in 1518, there was a momentous encounter with Martin Luther . Bucer turned to Protestant theology and was dismissed from the Dominican order in 1521 at his own request. But until the final dispensation he broke off his studies at the beginning of 1521, after he had made intensive efforts since 1520 to be released from the monastery. But the decision dragged on and so he found refuge at the Ebernburg near Franz von Sickingen . He worked there as a clerk for Ulrich von Hutten . Then on April 29, 1521, Bucer was released from religious vows by the Speyer bishop Georg von der Pfalz .

From May 1521 he worked for Count Palatine Friedrich II. As court chaplain and in 1522 received a pastor's position in Landstuhl through Franz von Sickingen . Here he married the former nun Elisabeth Silbereisen and moved with her to Weißenburg in Alsace . There he supported the local pastor Heinrich Moterer in the introduction of the Reformation and was therefore excommunicated by the Speyer bishop Georg von der Pfalz . 1523 he was by Pope Hadrian VI. banned and successfully sought asylum in the tolerant imperial city of Strasbourg as an outlaw . Here he was ordained and elected pastor in 1524. At the side of Wolfgang Capito and Kaspar Hedio , he soon assumed a leading position in the development of the Protestant church system in the imperial city and in the entire south-west of Germany.

In the following years he tried to mediate between the various Protestant parties ( Lutherans , Reformed , spiritualists , Anabaptists ). He paid particular attention to the sacrament controversy . Bucer took part in the Marburg Religious Discussion in 1529 and was one of the authors of the Confessio Tetrapolitana , in which four Upper German imperial cities summarized their understanding of faith for the discussions at the Augsburg Diet of 1530. In 1536, after a tough struggle, he reached a consensus with Martin Luther on the understanding of the Lord's Supper, which was fixed in the Wittenberg Agreement . In the years 1540 and 1541 he took part in the religious talks in Hagenau , Worms and Regensburg in attempts to achieve a balance between Catholics and Protestants.

During this time, Bucer also acted as the organizer of the evangelical regional churches. In 1531 he drafted a church ordinance for the city of Ulm , in 1534 advised the Württemberg Duke Ulrich on the introduction of the Reformation in Württemberg and in 1539 drafted the so-called " Ziegenhain Zuchtordnung " ( Ziegenhain Zuchtordnung ) on behalf of the Hessian Landgrave Philip I , which was the basis for the Reformation church system Hessen became. The Ziegenhain Breeding Regulations are still important today, as confirmation was introduced with them under the influence of the Anabaptist movement .

In 1541, Elisabeth Silbereisen, Wolfgang Capito and several of Bucer's children fell victim to a plague epidemic . The only common descendant to reach adulthood was the mentally retarded son Nathanael. At Elisabeth's request, Bucer married Wibrandis Rosenblatt in 1542 , the thirteen years younger widow of Wolfgang Capito and Johannes Oekolampad . The two had a harmonious marriage from which two more children grew.

In 1542/1543 Bucer lived in Bonn for a year to prepare the reformation of the archbishopric on behalf of the Archbishop of Cologne , Hermann V. von Wied . In the Wasserburg zu Buschhoven he wrote two Reformation writings with Philipp Melanchthon (“Einfaltigs Bedencken”) for the Archbishop of Cologne. His fiercest adversary in Cologne, along with the cathedral chapter, was the scholastics and rector of the University of Matthias Aquensis , who in turn reacted to Bucer's writings with five publications. The Cologne canon and choir bishop Christoph von Gleichen also vehemently opposed him. Then Bucer returned to Strasbourg. The failure of the Cologne Reformation attempt led him to establish a voluntary community alongside the state church structures in 1545 by founding a "Christian community". 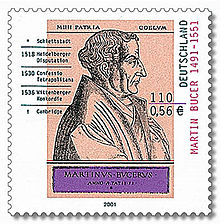 Special stamp of the Deutsche Post 2001 for the 450th anniversary of death.

In 1549 he had to leave the city. The reason was his resistance to the "Catholic" reorganization of the church system ordered by Charles V , the so-called interim . Invited by Peter Martyr Vermigli , Bucer emigrated to England , where he received the Regius Professur of Divinity at Cambridge, the equivalent of which was occupied by Martyr at the University of Oxford . There he received his doctorate theologiae in September 1549 . He was able to finish his program De regno Christi before he died in 1551 after a brief serious illness.

After his death, Catholicism became the state religion again under Maria Tudor . Bucer was exhumed in 1557 and burned as a heretic along with his writings. In 1560 he was rehabilitated by Elizabeth I in a solemn act at the university. A plaque in St Mary's Church in Cambridge commemorates Bucer's resting place.

Bucer was influenced by his role models Erasmus von Rotterdam , Martin Luther , Ulrich Zwingli , Philipp Melanchthon and Heinrich Bullinger . Bucer regards the difference between Luther and Zwingli as a "dispute more in words than in the matter". It is therefore understandable that Lutherans , Reformed and Anglicans should place him in the ranks of their teachers of the church. He had a particular influence on Johannes Calvin , who lived in Strasbourg from 1538 to 1541 and, among other things, took over the four-office apprenticeship from Bucer .

In the context of the Old Testament , Bucer referred very often to the 5 books of Moses , especially the first two. He used the legal texts contained there, for example with regard to the question of which spiritual competences the secular authorities are entitled to. The so-called deuterocanonical books were of no importance to him, in that he was even more radical than Luther (while Erasmus used the books Wisdom and Jesus Sirach very intensively.)

With regard to the New Testament , Bucer followed the classification of Eusebius of Caesarea and used the NT books, which were controversial in the Old Church and Luther, significantly less. He consulted the Acts of the Apostles and the historical books of the Old Testament fairly frequently, at least more often than his contemporaries did. Those Bible books to which Bucer dedicated his own commentaries ( Psalms , Zefanja , Synoptiker , John , Romans , Ephesians ), he did not use more often. The fact that Bucer selected certain books for commenting does not, therefore, express any particular preference for these books. Compared to his contemporaries, Bucer relied much more on the NT than on the OT (this applies in particular to the “young Bucer”), and its use within the NT - similar to that of the other reformers - is one-sided; he concentrated heavily on the letters of Paul .

Above all, it is Bucer's practical theological writings that had a lasting influence on the churches of the Reformation in the areas of homiletics , church building and pastoral care . Particularly noteworthy here is the confirmation , the origin of which goes back to Bucer, but was only introduced across the board by the Protestant regional churches in the time of Pietism in the 18th century.

February 28 in the Evangelical Name Calendar .