Wissembourg [ visɑ̃ˈbuʀ ] (German Weißenburg , in the local South Franconian dialect Weisseburch ) is a French commune with 7537 inhabitants (as of January 1, 2017) in the Bas-Rhin department in the Grand Est region (until 2015 Alsace ). The municipality of Wissembourg is a member and seat of the municipal association Communauté de communes du Pays de Wissembourg .

In the late Middle Ages and early modern times , Weißenburg was an independent imperial city in the Holy Roman Empire .

The city lies on the Lauter river , which has its source in Germany , at the point of the Franco-German border where the Upper Rhine Rift merges into the Palatinate Forest and the Vosges . On the German side, the local community Schweigen-Rechtenbach ( Verbandsgemeinde Bad Bergzabern , Südliche Weinstrasse district , Rhineland-Palatinate ) is opposite . Wissembourg is the northernmost commune in the Bas-Rhin department.

The districts of the municipality are Altenstadt (about 1000 inhabitants, incorporated in 1974) and Geisberg , Schafbusch, Geitershof, Weiler and Welschdorf. 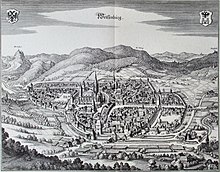 Weißenburg on an engraving from the 17th century

Gothic cloister of the old monastery

The community of Weißenburg developed from a steadily growing settlement around a monastery founded in the 7th century , which soon gained in importance and became an abbey. From 1306 to 1697 Weißenburg was an imperial city . It belonged to the League of Ten cities of Alsace, founded in 1354 .

In 1440 the Weißenburg citizen Eikhart Artzt began to write down his "cronick" of the city.

Between 1480 and 1503 the dispute between the monastery and the lord of the nearby Berwartstein , Hans von Trotha , occupied successively the Elector Palatinate , Philip the Sincere , the Roman-German King and later Emperor Maximilian I and even the Popes Innocent VIII as well Alexander VI. The climax of the dispute was the so-called water feud in 1485 , when Hans von Trotha first withdrew the water from Weißenburg by damming the Lauter, and then tearing down the dam and causing the city to suffer a huge flood. 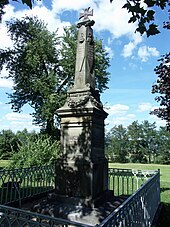 Portrait of Joseph Philipp von Stichaner at the monument in Wissembourg

In 1522 the Reformation was introduced by Heinrich Motherer, the pastor of the Johanneskirche, and Martin Bucer .

After the Peace of Westphalia in 1648, large parts of Alsace came under French rule, and France was granted the bailiwick through the Alsatian League of Ten Cities. However, he continued to send his representatives to the permanent Reichstag in Regensburg . With his reunification policy , Louis XIV had the ten cities conquered in 1673 and 1674, their fortifications razed and placed under the French provincial administration. The peace of Nijmegen in 1679 confirmed the loss of the imperial direct status of the ten cities and sealed the end of the Decapolis. Weissenburg and the Palatinate Landau as well as the entire Alsace belonged to France from 1680.

With the French Revolution , it was integrated into the country's modern administrative and legal system. From 1800 to 2014, the city of Wissembourg was the seat of the sub-prefecture ( Sous-préfecture ) of the arrondissement of Wissembourg in the Bas-Rhin department and the German district directorate. The city has been the canton's capital since 1800; the canton was expanded from 13 to 44 municipalities in January 2015.

Today's districts of Altenstadt and Weiler were initially Palatinate communities in the canton of Bergzabern after the Congress of Vienna . On July 5, 1825, they were ceded by Bavaria to France together with Obersteinbach and Niedersteinbach in the Border Convention between Bavaria and France . In 1816 Weißenburg became a border town to the Bavarian Palatinate, to which Landau belonged again since 1815. In 1861 Weißenburg had 5376 inhabitants.

On August 4, 1870, Prussian troops defeated the French in the Battle of Weissenburg . Two well-tended monuments - one for the French and one for the German fallen soldiers - on the Geisberg on the Wissembourg– Riedseltz road are a reminder of the many fallen. Citizens from Wissembourg fought as soldiers on both the French and German sides.

With the Peace of Frankfurt (1871) Alsace (with Wissembourg) and Lorraine were annexed to the newly founded German Empire . From June 28, 1871 to 1918, the city was part of the realm of Alsace-Lorraine . In September 1871 the military government was dissolved and the German administration was established. Wissembourg became the seat of a district headquarters and a garrison location : After the end of the war, the Infantry Regiment No. 60 did not move back to their Brandenburg homeland, but moved into Weißenburg. The new barracks were built for the regiment from 1893 to 1896 . The barracks on Rue de l 'Industrie ( map ) still preserved today are used as residential buildings. 49.030277777778 7.9466666666667

From the predominantly Catholic population of Alsace-Lorraine, the annexation was led by the Protestant dominated Prussia was received with skepticism. The good relationship of the district director Joseph Philipp von Stichaner to the citizens and to the leadership of the district loyal to France was an exception in the whole of Alsace. At the end of 1886, Stichaner was appointed district president in Strasbourg. Around 1900 Weißenburg had a Protestant church, a Catholic church, a grammar school , an agricultural school, a chief forestry and was the seat of a local court.

After the First World War , the city was added to France together with Alsace due to the provisions of the Versailles Treaty . The Chasseurs alpins moved into the Neue Kaserne (now Caserne Abel Douay ) . During World War II from 1940 to 1944/ 1945 , the city and the country were annexed by the German Reich. In March 1945, the city and the surrounding area were captured by US troops as part of Operation Undertone .

Since 1945 the city has belonged to France again. Negotiations continued until 1990 for sovereignty over the Mundatwald , which lies in the north of Wissembourg in the Palatinate .

Today, an open border leads to neighborhood help in the event of a fire and to cooperation between the emergency medical services on both sides. In 1997 the Maximiliansbahn between Wissembourg and Winden in the Palatinate was reopened.

Wissembourg's old town is still partially surrounded by remains of the old city fortifications. It is the northern starting point of the Romanesque Road , which leads through places with Romanesque monuments in Alsace . Here it is the abbey church of St. Peter and Paul and in Altenstadt the parish church from the 11th / 12th. Century.

The Abbey Church of Saints-Pierre-et-Paul ( Saints Peter and Paul) is one of the largest churches in the Bas-Rhin outside of Strasbourg. The predominantly Gothic building still has a Romanesque bell tower from the previous building (11th century). Inside there are glass windows and wall paintings from the 14th / 15th centuries. Century, including an eleven meter high representation of St. Christopher , as well as an originally preserved organ from 1766, which has one of the most magnificent cases in Alsace. All that remains of the old Weissenburg monastery , where the monk Otfrid von Weißenburg worked, is an unfinished high-Gothic cloister, which is considered to be one of the most beautiful in the Upper Rhine area. Attached to this is a former Romanesque chapter house, which today serves as a side chapel.

The Protestant parish church of Saint Jean is a simple Gothic building from the 15th century in the style of the mendicant order architecture.

The most interesting buildings in the city include the salt house from the 15th century with its striking roof, the Maison de l'ami Fritz (around 1550, location of the filming of the novel L'ami Fritz ) with its elaborate bay window and the classicist town hall (built in 1741 to 1752), a major work by the Strasbourg city architect Joseph Massol . The Vogelsberger house with its renaissance portal dates back to 1540. The founder of the order Charles de Foucauld lived in the house on Quai Anselmann for a few years as a child.

In the Musée Westercamp , archaeological finds from the area, medieval works of art and documents on the city's history and local history are exhibited.

The Wissembourg train station is the terminus of one of Haguenau coming south railway line from TER Alsace , a regional subsidiary of SNCF , operates, and from the north, from the Rhineland-Palatinate, inbound Palatine Maximilian Railway . From this direction, on weekends and on public holidays from the end of April to the end of October, day trippers have a direct connection from Mainz with the RE Elsass Express and from Koblenz with the Weinstrasse express . Wissembourg is part of the German Rhein-Neckar transport association and the Karlsruhe transport association .

Road traffic is connected to the north with the federal highway 38 via Bad Bergzabern and Landau in der Pfalz ( A 65 ) to the German trunk road network. To the south, the Départementsstraße D 263 connects Wissembourg with Haguenau. The D 3 runs parallel to the German border from Lauterburg ( Autoroute A35 ) in the east via Wissembourg to Bitsch in the west.

Hannes Wader dedicated the song Kleine Stadt to Wissembourg . In it he describes the atmosphere, the mentality of the local residents and the beauty of the city. He also recorded a French version of Petite Ville . In his private life, he meets up with friends at the Au Cygne restaurant at least once a year to sing.

Old town of Wissembourg: row of houses along the Lauter (covered) with the old salt house (right)

Communes in the Arrondissement of Haguenau-Wissembourg