The county of Hanau-Münzenberg was a territory of the old German Empire . It emerged in 1458 from a division of the County of Hanau .

Creation of the county

In 1452 Reinhard III died after only one year of reign . from Hanau . Heir was his only four-year-old son Philip I, the younger . Concerned about the continued existence of the family, the relatives and other important decision-makers in the county agreed not to apply the family primogeniture statute of 1375, one of the oldest in Germany, and to give the uncle of the heir and brother of the late Reinhard III, Philip I, the elder to give the Babenhausen office from the holdings of the County of Hanau as a separate county. This gave rise to the County of Hanau-Lichtenberg . The remaining territory, which represented the majority of the County of Hanau, remained with Philip I, the younger, and was now called Hanau-Münzenberg.

The history of the County of Hanau-Munzenberg is shaped by a long series of guardianship . The counts of Hanau-Münzenberg died almost all early. It is unclear whether this was due to a hereditary disease.

Under Philip II, the construction of a city ​​fortification for the residential city of Hanau according to the technical standard of the Renaissance began in 1528 . The medieval wall had become too small in size and also offered insufficient technical protection against the emerging artillery .

See also: Administration of the County of Hanau-Munzenberg .

The County of Hanau-Munzenberg soon joined the Reformation - initially in its Lutheran form. In 1523 Adolf Arbogast first became pastor in Hanau, who was already cultivating reformatory approaches and attached increasing importance to sermons. He was followed in 1528 as the first evangelical preacher, Philipp Neunheller , called to Hanau by Count Philipp II . The process of the Reformation was gradual and can only be started under Philip III. be considered complete. Philipp Neunheller introduced his own catechism and a church order based on Lutheran and Reformed foundations. His successor, Nicolaus Krug , who had studied with Philipp Melanchthon and Martin Luther at the University of Wittenberg since 1523 and was ordained by the latter in 1539 , again represented a more conservative Lutheranism and eliminated the Reformed elements by revising one of Philipp Melanchthon's in Hanau in 1552 Introduced Mecklenburg church order . After a visit in 1562, in which it was found that the Mecklenburg church order was applied everywhere, but the parish practice was very different, the church order of the Duchy of Pfalz-Zweibrücken was introduced.

For Count Philipp Ludwig II. , Whose father died early, Count Johann VI. von Nassau fulfilled the guardianship and finally married his mother, Juliana Countess von Stolberg . Philip Ludwig II came under strong Calvinist influence. As ruling sovereign he then made use of his right to determine the denomination of his territory (" cuius regio, eius religio "). The County of Hanau-Münzenberg became Calvinist in a second Reformation. However, this did not fully succeed. Both in the Bieber , Partenstein , Gronau , Selters and Steinbach condominiums shared with Mainz , the churches remained Lutheran, in other villages on the outskirts of the county, for example in Seckbach or Ginnheim , the churches were reformed, but a considerable part of the population remained Lutheran and attended the service in the neighboring Lutheran "abroad".

At the turn of the 16th to the 17th century, the Solms land law became common law in the county of Hanau-Münzenberg . The background to this was that the surrounding territories also adopted this "modern" law from 1571, which was recorded systematically and in writing and which also came from the immediate vicinity. The common law now only applied if the regulations of the Solms land law did not contain any provisions for a matter. The Solms land law remained in force in the parts of the state that later fell to the Grand Duchy of Hesse , which was only replaced on January 1, 1900 by the civil code that was uniformly applicable throughout the German Empire .

Establishment of the Neustadt Hanau

On June 1, 1597, Philip Ludwig II signed a treaty with Calvinist refugees from France and the Spanish Netherlands , the "Surrender of the New Town of Hanau". The surrender was supplemented in 1604 by a " Transfix of the Neustadt Hanau". The contracts granted the newcomers the right to settle in the new town of Hanau, which was to be founded, and further benefits. The count designated a building site in front of Hanau's old town (against the resistance of the Archbishop of Mainz , who viewed the area as a wild ban), paid for part of the infrastructure - especially the fortifications - and granted tax advantages and the right to political self-determination for the new township. The religious refugees from France and the Netherlands had not previously been welcomed in the imperial city of Frankfurt am Main and were therefore interested in leaving the territory of the Lutheran-dominated Frankfurt and moving to a Calvinist area without going too far from the Frankfurt exhibition center to remove. In addition, the Hanau Count was nowhere near as powerful as the wealthy city of Frankfurt and was therefore ready to make economic and political concessions. With the refugees immense knowledge in the manufacture of luxury goods came to the county, especially the city of Hanau.

The new town was leaned from the old town with its own, modern baroque fortifications. The planned layout of the city established a regular, chessboard-like street network that characterizes Hanauer Neustadt and is now a listed building . In 1620 there were already more than 370 houses. A large double church of its own (today: Walloon-Dutch Church ) was also built until 1611, with one church for the French and one for the Dutch-speaking congregation under one roof.

The old and new town of Hanau existed side by side until 1821. In addition to the spatial separation through the fortifications between the old and new towns, they had separate administrations and city councils, each with their own mayors.

In December 1603, Philipp Ludwig II also granted the privilege to settle the second Jewish community in Hanau. The first Jewish community in Hanau was wiped out in the course of the late medieval plague pogroms . The Judengasse (today: Nordstraße) was built between the old and new town in the area of ​​the Zwinger of the old town fortifications. This community was directly subordinate to the count's administration, not one of the two city administrations of the old or new town of Hanau.

In 1610, Philipp Ludwig II of Hanau-Münzenberg and Johann Reinhard I of Hanau-Lichtenberg signed an inheritance contract. When one line expires, the other should enter the line of succession.

Shortly before the Thirty Years' War , in 1597, the Hanau military was placed under the direction of a full-time worker, a master craftsman . This military consisted of militia associations organized locally in rifle associations. The Hanau Fortress was also commanded by a professional fortress commander, who only had a small staff of soldiers at his disposal. Guard services and possibly also a considerable part of the defense of the facility were in the hands of the citizens' militia. A well-known fortress commander was Johann Winter von Güldenborn .

During the Thirty Years' War , the Calvinist Hanau initially sided with the reformed “Winter King” Friedrich V (1596–1632). Count Philipp Moritz von Hanau-Münzenberg handed the Hanau fortress over to two approaching Swedish cavalry regiments. King Gustav Adolf of Sweden asked Count Philipp Moritz to raise eight companies of infantry and appointed him colonel . But in 1634 he traveled to safe Holland via Metz. Although he had left his brother, Jakob Johann von Hanau-Münzenberg , behind to protect his interests, he too left Hanau after he discovered that the Swedish occupation no longer gave him any room for maneuver. He went to the army of Duke Bernhard von Weimar in Alsace , where he fell in the attack on Zabern in 1636 .

From 1630 to 1638, the Swedish army under the Scottish general Jakob von Ramsay used the fortress city of Hanau as a base to control the surrounding area from here. The area around the city of Hanau and the entire county were badly devastated. Grimmelshausen processed the Swedish occupation of Hanau in his picaresque novel The adventurous Simplicissimus . From 1635 to 1636 Hanau was besieged unsuccessfully by imperial troops under General Lamboy . During the siege, the modern city ​​fortifications of Hanau , which had only been built a few years earlier with the Neustadt Hanau, proved their worth . Thousands had fled from the surrounding villages to the city, and the conditions there were terrible. These were even worse in the area around Hanau: Here, in the county of Hanau, the town of Windecken , three larger towns and 33 villages were destroyed within two months . After a nine-month siege of the city of Hanau, a relief army under Landgrave Wilhelm V of Hesse-Kassel arrived in June 1636 and liberated the city. Wilhelm von Hessen-Kassel was married to Amalie Elisabeth , a daughter of Philipp Ludwig II.

In February 1638 the Swedes were expelled from Hanau and Philipp Moritz was reinstated in the government. However, he died a few months later.

The end of the independent county of Hanau-Munzenberg

Count Philipp Moritz was followed in 1638 by his six-year-old son Philipp Ludwig III. , for whom his mother Sibylle Christine von Anhalt-Dessau (1603–1688) reigned. He also died three years later. He was followed in 1641 by Count Johann Ernst von Hanau-Münzenberg , son of a brother of Count Philipp Ludwig II from the Hanau-Münzenberg-Schwarzenfels sidelines. After only three months of reign, he also died in 1642. With that, the Hanau-Munzenberg line was extinguished. According to the inheritance contract of 1610, the only nineteen year old Count Friedrich Casimir von Hanau-Lichtenberg inherited . With that, the two parts of the County of Hanau were reunited and the history of an independent County of Hanau-Münzenberg was actually over.

Due to the inheritance contract of 1643, the Hanau-Münzenberg part of the state now fell to Hesse-Kassel , due to the marriage of Charlotte von Hanau-Lichtenberg in 1717 with the Hereditary Prince Ludwig (VIII.) Of Hesse-Darmstadt, the Hanau-Lichtenberg share to there. For decades, the affiliation of the Babenhausen office to the Munzenberger or Lichtenberger inheritance remained controversial between Hessen-Kassel and Hessen-Darmstadt . This dispute was finally settled at the end of the 18th century through a real division.

In 1680, caused by the French wars of expansion, a military "Haunau Empire and District Contingent" was set up, which - contrary to previous practice - was no longer dissolved. When the county of Hanau-Münzenberg passed to the Landgraviate of Hessen-Kassel , it was renamed "Hanauisches Bataillon" and was stationed first in Kassel and later in Eschwege .

With the Hessian Insurance Act of 1754, Landgrave Wilhelm VIII of Hessen-Kassel wanted to ensure that his son, Friedrich II , who had converted to the Catholic faith, received as little power as possible after he took office. For this purpose u. a. the county of Hanau separated from the Hesse-Kassel ancestral lands and from 1760 placed under the rule of his grandson, the Hessian hereditary prince Wilhelm (IX.) , who later became elector Wilhelm I. For the prince, who was still underage, initially his mother, Maria von Hannover, was the guardian; from 1764 he ruled himself. It was not until 1785 that he took over the government of the Landgraviate of Hesse-Kassel. Until then, the County of Hanau remained largely independent and was only then gradually incorporated into the Landgraviate. Hereditary Prince Wilhelm tried successfully to modernize his county of Hanau. The residential town of Hanau was expanded, the Wilhelmsbad spa complex - construction began in 1777 -, the iron-bearing spring of which was discovered in 1709, was built. The money for this came partly from renting out the military to his uncle, King George III, between 1776 and 1783 . of Great Britain . A contingent of troops from Hanau County, approx. 2,400 men, was used in the American War of Independence . 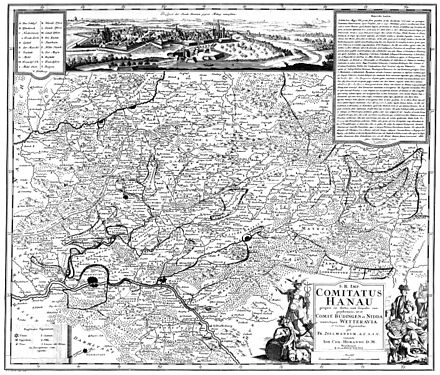