The title of this article is ambiguous. Further meanings are listed under Solms-Braunfels (disambiguation) . 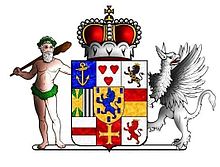 Coat of arms of the princes of Solms-Braunfels 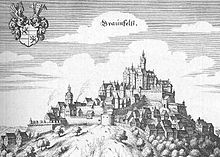 Braunfels Castle , the residence of the counts and princes ( Merian engraving, before 1655)

Solms-Braunfels was an aristocratic family existing in Germany , Switzerland , Austria and Bohemia , which in 1989 became extinct in the male line.

In 1409 the Counts of Solms divided into the lines Solms-Braunfels and Solms-Lich .

Bernhard II. Count von Solms-Braunfels († 1459) was the son of Otto I von Solms-Braunfels and Agnes von Falkenstein-Münzenberg. In 1420 he inherited Lich , Laubach and Hungen with a share in Munzenberg (together with his brother Johann), and from 1420–1436 he shared with the brothers. In 1436 he was the master of Braunfels, Greifenstein and Hungen. His descendants again divided into three branches, of which only the Greifenstein branch still exists, which took the name Braunfels in 1693, moved his residence from Greifenstein Castle (now in ruins) to Braunfels Castle and was elevated to the rank of imperial prince in 1742 . In 1582, Count Konrad introduced the Reformed Confession . 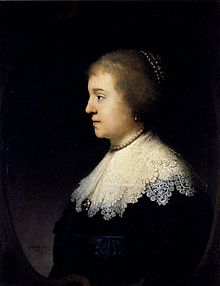 The family achieved European importance through Amalie zu Solms-Braunfels (1602–1675), the daughter of Count Johann Albrecht I of Solms-Braunfels (1563–1623) and his first wife, Countess Agnes zu Sayn-Wittgenstein (1568–1617), who married Prince Friedrich Heinrich of Orange , governor of the Netherlands, in 1625 . She became the mother-in-law of Elector Friedrich Wilhelm von Brandenburg and was the grandmother of Kings Wilhelm III. of England and Frederick I of Prussia .

In 1806 the Solms principalities were mediatized , d. In other words, they lost their imperial immediacy , but retained extensive special rights as class lords . After long negotiations, the Princely Solms-Braunfels government was set up in 1828, thereby establishing a subordinate rule in the Kingdom of Prussia .

Prince Georg zu Solms-Braunfels (born March 18, 1836; succeded March 7, 1880 to his brother, Prince Ernst ) owned the most respectable contiguous part of the estate , namely the offices of Braunfels and Greiffenstein under Prussian sovereignty, and the offices of Grand Ducal Hesse Hungen , Wölfersheim and Gambach , a part of Limpurg-Gaildorf under Württemberg , together 514 km², with which possessions a Virilstimme in the state parliament of the Rhine province was connected. This line also belonged to the Austrian Lieutenant Field Marshal Prince Carl zu Solms-Braunfels (1812-1875), son of Prince Friedrich Wilhelm zu Solms-Braunfels (1770-1814) and Princess Friederike von Mecklenburg-Strelitz (1778-1841) and stepbrother of the King George V of Hanover , on whom he worked in the interests of Austria; his sons were Catholic and in Austrian service.

The full title of the regent of the main line Solms-Braunfels was His Highness Prince of Solms-Braunfels, Count of Greifenstein, Lichtenstein and Hungen, Tecklenburg, Crichingen , Lingen, Lord of Munzenberg, Rheda, Wildenfels, Sonnewalde, Püttlingen, Dortweiler and Beaucourt .

The first  majorat (zu Braunfels) went in 1970 with the death of the last male descendant of this line, Prince Georg Friedrich zu Solms-Braunfels (1890-1970), to whose son-in-law Hans Georg Graf von Oppersdorff Solms-Braunfels (1920-2003) had his seat in Braunfels.

The founder of the second and Catholic line was Prince Wilhelm Heinrich in Austria-Hungary . In the 19th century, most of the family members were officers. Two thirds of the large estates in Bohemia , Moravia , Silesia , Galicia and Lodomeria were lost after 1918 and completely lost in 1945. With Count Alexander (1903–1989) the last younger branch of the Solms-Braunfels family also went out.