The diocese of Verdun ( Latin Dioecesis Virodunensis , French Diocèse de Verdun ) is a Roman Catholic diocese in France that was established in the 4th century .

The diocese of Verdun lost most of the books it had written up to then in a fire in the cathedral in the 10th century. The presbyter Bertharius von Verdun (* around 875; † after 925) reconstructed around 915 on the basis of what he had read or heard, the diocese chronicle of the first 31 bishops. In it he described how the diocese, (elected 550) its then lands on the Moselle River in the 6th century, the time of Bishop Agericus from Austrasian King Childebert II. (Reigned 575-596) have been given.

The diocese, which belonged to the Trier Metropolitan Association , had an area of ​​around 3,000 km² around the year 1000 and was almost completely covered by the county of Verdun . During this time the diocese was able to boast 4 archdeaconates with 9 deaneries .

The cathedral chapter , which was under the direction of a provost , also had the office of primicerius . In the Middle Ages, he rose to be the most important man after the bishop. But the office fell into disuse and was abolished in 1385. Since then, the dean has headed the chapter.

Plague epidemics and military campaigns caused the diocese to lose a large part of its population in the 14th century, so that it also fell into economic decline. Between 1457 and 1548, none of the bishops held residence in the diocese . It was precisely at this time that France, Burgundy , Lorraine and the Emperor played a role in the play of forces . In addition, the Pope did not want to apply the Vienna Concordat to the diocese of Verdun. His appointments played the diocese into the hands of the Duke of Lorraine and led to further distancing between the diocese and the empire. The Kingdom of France not only claimed more and more rights since the 16th century, but also built a citadel in the episcopal city in the 1st quarter of the 17th century. When the bishop protested and excommunicated the royal court president, he was taken to Paris and his income confiscated.

The Peace of Westphalia (1648) finally passed the diocese over to France. 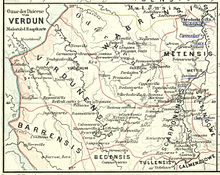 After the diocese of Verdun was secularized during the French Revolution, it was re-established on October 6, 1822. Detached from the diocese of Nancy , it now covered an area of ​​6,211 km² and belongs to the Metropolitan Association of Besançon .