A parish or parish ( parochia, paroecia , from ancient Greek παροικία paroikía , neighborhood ') is a legally demarcated community of believers in the structure of many Christian churches, which is presided over by a pastor . The community of believers is called a parish community , also the associated pastoral care area, as an administrative district also parish or parish district ; the official district, the official seat of the pastor and also the official dignity are also called parish or rectory , and the office and residential building itself is also called the rectory and occasionally the rectory . 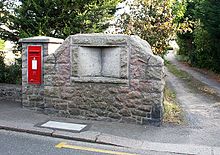 Stone relief in a wall. It shows the border between two parishes and stands between Grouville and Saint Clement in Jersey .

The origin of the word παροικία (paroikía) is mostly assumed to be πάρ-οικος ( pár-oikos ), which literally means 'at the house', that is, 'neighborhood'.

Another etymology is based on παροχή ( parochē , from παρ-έχω) 'presentation'.

Differentiation from the term parish

From the parish is Kirch (s) community to distinguish. The concept of the parish does not appear in Catholic canon law. In Germany, the General Prussian Land Law was based on Protestant terms and viewed the parish as a legal person because of its role in asset management. This prevailed in state church law , so that the state considered all members of a parish as a parish, although this had no legal personality in internal church law until 1983; The legal entity of the parish at that time was the church foundation. This is why the parish is of crucial importance in state church law in Germany today, although it must be distinguished from the parish. A parish can consist of two parishes, each of which has an asset management council (board of directors, church board of directors).

In Switzerland, in cantons with a regional church model, there is also a dualism between state and church structure, although this is even more important because the cantons in question have made the recognition of the church as a religious community dependent on certain conditions, such as a democratic election of the pastor. The regional churches and parishes that existed as a parallel structure to the diocese and parish received the right to tax as sovereign power borrowed from the canton.

Early Christianity was a city religion. In every city with a Christian community, the bishop led the pastoral care , supported by his clergy . The episcopal church also represented the center of Christian life. From the 2nd century onwards, Christianity expanded more and more to rural areas, or it expanded into areas that had hardly any cities. In the east, pastoral care was initially taken over by so-called choir bishops . Soon, however, clerics appointed by the bishop of the nearest town took their place. In the west, with the increasing Christianization, pastoral care areas were set up, which were led by clerics sent by the bishop. These clerics initially had only delegated powers, e.g. B. for baptism and the Eucharist .

From the 6th century onwards, these pastoral care districts were referred to as “parochia” or “paroecia” (see also the original parish ). The parish structure became formative for the organization of pastoral care and thus for the life of the faithful. The development of the parish structure in turn was supported by the proprietary church system , pen being determined and monasteries. Eventually, a comprehensive system of parishes developed, which became increasingly dense. Two conditions developed for the establishment of new parishes: First, the maintenance of the pastor had to be ensured. This was done through benefices , the proceeds of which went to the pastor. The second condition was to provide the parish itself with sufficient financial resources, especially for maintaining the parish church . A church foundation (“fabricae ecclesiae”) was set up for this purpose. Due to the compulsory parish , the faithful were obliged to receive the sacraments in their own parish.

According to a decree by Pope Alexander III. (1159–1181) branch churches or vicariats could be set up for believers in more distant areas .

Development after the Council of Trent

The Council of Trent (1545–1563) determined that there should no longer be any church people without a parish. Every believer had to be assigned to a parish. The territorial parish, i.e. the grouping of believers living together in one area, became the norm. In addition, there are still staff parishes , albeit in significantly fewer numbers. In addition, the council reorganized the tasks, rights and duties of the pastor, in particular with regard to sermons, marriage assistance and the application obligation on Sundays and public holidays. In addition, the pastors were expressly obliged to reside in their parish and to keep church records (baptismal records, marriage books).

The parish still represents the central space for the Christian and congregational life of God's people. In the more recent canon law (see below), however, there is no longer a parish requirement, so that today believers can decide more freely about the place of baptism, marriage and burial. The higher mobility also enables the targeted search for special offers from other parishes.

According to current canon law , the parish is “a specific community of believers established in a particular Church and whose pastoral care is entrusted to a pastor as its own shepherd under the authority of the diocesan bishop” (can 515 § 1 CIC ). Each diocese must be divided into parishes (can 374 § 1 CIC). Its establishment, abolition and modification is the sole responsibility of the diocesan bishop , who, however, has to hear the council of priests (can 515 § 2 CIC). The parish has legal personality by virtue of right (can 515 § 3 CIC).

The pastor as the community's “own shepherd” ( pastor proprius , can 515 § 1), also called canonical pastor , must have been ordained a priest (can 521 § ​​1 CIC). The possibility of incorporating a parish into a canon chapter (such as a cathedral chapter ) or a religious order no longer exists according to canon law of 1983 (can 520 § 1 CIC). If pastoral care was or is to be transferred to a chapter of canons or a religious order, one of the members must be appointed as a regular pastor.

1) A territorial Parish is to canonical right in the Catholic Church a spatially delimited Seelsorgeeinheit under the direction of a parson . It is the most common type of parish and includes all Catholics in a given territory.

2) The personal parish (in Austria personal parish) as a special organizational form of the parish does not have its own area. The affiliation of Catholics to personal parishes does not depend on the place of residence, rather they are assigned to certain groups of believers who differ from the rest of the Catholic population in a region by ritual or language, and more rarely by nationality or social origin.

3) A quasi- parish (also parish curatie , parish vicarie , rectorate parish or locality ) is a certain community of believers that “has not yet been established as a parish due to special circumstances” ( can. 516 §1 CIC ), for example in new building areas.

4) In the Catholic Church, a pastoral district without its own asset management, which is dependent on a mother parish and is headed by a parish vicar , is referred to as an expositur .