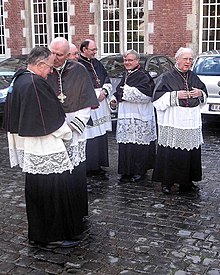 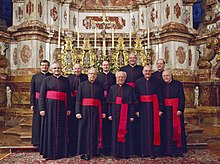 Another explanation of the term is derived from the common order of life of the clerics concerned : the corresponding rules were read out chapter by chapter during daily meetings . This ultimately gave the community of canons their name - the cathedral chapter.

The cathedral chapter supports the bishop as an independent legal person in the management of the diocese . In certain matters it has the right to consent or advice. The body consists of the Dompropst , Domdechant or Domdekan (the so-called dignitaries or dignities), which in individual chapters also include other resident and non-resident members from other regions of the diocese; other offices within a cathedral chapter are e.g. B. Cathedral curator , cathedral choirmaster , cathedral cantor or cathedral waiter . The extended cathedral chapter can include honorary canons (honorary cathedral capitulars) who are appointed by the bishop. One of his most important tasks is to elect the diocesan administrator after the resignation or death of a bishop - i.e. when the sedis vacancy occurs - and to submit a list of candidates for the office of bishop to the Pope . The actual main task of the cathedral chapter, however, is to maintain the choir prayer and the liturgy at the cathedral church .

The Council of Trent put an end to the canons ' attempt to curtail the right of bishops to visit the cathedral chapter and ordered that at least half of the canons should be priests and half should also have degrees in theology or canon law . In addition, it demanded the appointment of a cathedral theologian and a penitential canon and curtailed the position of the cathedral chapters during the sedis vacancy, in which it imposed on them to appoint a chapter vicar within eight days , who then had to administer the diocese independently of the cathedral chapter.

During the 19th and 20th centuries, the right to elect bishops was redefined in a large number of countries through concordats between the Holy See and governments. As a rule, the respective cathedral chapter submits a list of candidates for the office of bishop to the pope , from which the pope then appoints the bishop.

In many Lutheran areas the cathedral chapters also existed after the Reformation . In some cases, as in Halberstadt or Minden , the chapter remained as a corporation, but was controlled by the sovereign; in other cases, for example in the prince-bishopric of Lübeck , the chapter, which no longer consisted of clergymen, also exercised secular rule over its share of the bishopric ; so the Lutheran cathedral chapter in Lübeck owned until 1804 a. a. the Stormarn villages Hamberge and Hansfelde. The Lutheran cathedral chapters were dissolved as part of the secularization of ecclesiastical goods as a result of the Reichsdeputationshauptschluss 1803 or in Prussia until 1810. Only the United Cathedral Founders of Merseburg and Naumburg and the Zeitz Collegiate Foundation have remained largely unchanged in their legal subjectivity to this day. The cathedral chapter in Brandenburg was restored in 1826 and, after an eventful history, has also been preserved to this day, like the chapters in Meißen and Wurzen as Lutheran church corporations.

Roman Catholic cathedral chapters no longer exist in every diocese. Newer dioceses in particular no longer have their own cathedral chapter. Its functions, especially if the episcopal see is vacant , are performed by a diocesan college of consultors .