Canonicus is a redirect to this article. For the chief of the Narraganset see Canonicus (Sachem) . 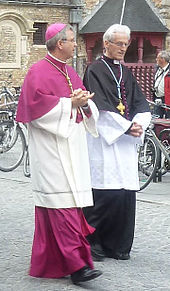 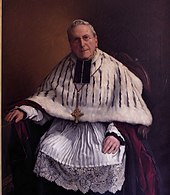 Master of Spes nostra : canons and saints at a grave or allegory of transience. about 1500

Canon , also canons or canons called, are clerics mostly all consecration stages of the Roman Catholic or the Anglican Church , as members of a cathedral chapter or a pen chapter of a cathedral , basilica or religious church ( Canons Regular ) on the common liturgy participate. Common liturgy is understood to mean the celebration of Holy Mass and the Liturgy of the Hours , to which all priests are obliged, whether alone or in community.

This is where the name "canon" comes from, which is derived from the church Latin term canonicus , which in turn goes back to the Greek (κανών "rule, rule" or κανωνικός "regular, obligatory"). The times of the "canonical hours" (horae canonicae), that is, those of the liturgy of the hours , have been circumscribed in the West by the Rule of Benedict since the middle of the 6th century .

Canons live in community. The head of a chapter is usually a provost , and sometimes a dean or prior is in charge of it . Some chapters are directed directly by the diocesan bishop ; At the Roman patriarchal basilicas , the headmaster holds the title of archpriest . Today the canons are mostly active in pastoral care and are more or less fully supported by the church property.

Basically, a distinction is made between two types of canons: the regular canons, or regulated canons, whose community basis is usually the Augustine rule , and the secular canons who live according to consuetudines , i.e. interpretations of monastic rules of the order.

The canon rule (regula canonicorum) , which was developed based on the model of Augustine as a demarcation from (Benedictine) monasticism, was established in 755 by Bishop Chrodegang of Metz for his diocese, further developed at the Imperial Synod of Aachen by Emperor Ludwig the Pious (Ludwig I) and in Year 816 was set as binding for the entire Carolingian Empire. A community of secular clergy is called a collegiate foundation .

Since the middle of the 11th century a reform has been observed among the canons leading to regulated canons. By renouncing property under the sign of the vita apostolica , there was a break with the Institutio canonicorum Aquisgranensis (Aachen institution) from 816 and the formation of regulated canonies . Regular canons (Augustinian canons) took a vow on their cathedral pen (Hochstift) or collegiate pen (Niederstift) and chose from the two traditional Augustine rules , either the more moderate version Praeceptum / ordo antiquus or, following the stricter observance, the version Ordo monasterii / ordo novus . The Premonstratensian order initiated by Norbert von Xanten (originating from 1120 in Prémontré / Northern France) decided on the ordo novus , for example .

The next persisting Säkularkanoniker took off no vows and were often rich canon sinecures of the endowment as of 11/12. Century often add to their private wealth. The pastoral tasks often faded into the background and were then only carried out by vicars. The nobility, in particular, often used secular canon positions at foundations to care for their later sons and as a springboard for a career in the clergy or at court. One positive aspect of secular canonism was its significant role in establishing universities in the late Middle Ages. The first professors of these newly founded universities were predominantly secular canons. Such collegiate pens of secular canons were widespread in the Middle Ages, but were mostly converted into Augustinian canons and became very rare with the secularization at the latest.

Although the canons are obliged to keep the hours of the hours of the hour , they differ from monks in their way of life, as they are usually entrusted with pastoral care outside the monastery. A way of life turned away from the world could therefore not be brought into harmony with this activity. Canons do not live in cloister either . The principle of non-possession does not apply to the canons. Each canon is allowed to own property and is also endowed with benefices as a source of income.

Canonicals (the term did not appear until the 11th century) are women who leada communal spiritual life under a superiorin a women's monastery without being tied to a monastic community ( Institutio sanctimonialium Aquisgranensis , Aachen institution from 816). Private property was allowed, the right of inheritance was unrestricted and the canons / canons were allowed to live in separate apartments with a servant, that is, they were usually nobles. The double pens of canons and choir women, which were still quite common at the beginning, were more and more dissolved in the course of the High Middle Ages, with the canonesses mostly having to give way and a prior or provost appointed by the bishop or abbot as head of the community instead of a superior chosen by the community itself has been. While the ladies of a monastery belonged predominantly to the high nobility, it mostly remained with the leadership of an abbess from these circles.

The clothing of the canons in the 12th century was a long body skirt , over which the linen choir shirt ( alb ); then the almutium , a sheepskin cap that covered the head, neck and shoulders; in addition a black coat without a collar and the pileolus (skull cap). The later canons gave this costume a more pleasing appearance. Specifically, they exchanged the little skull cap for the square biretta , the choir skirt shrunk to the sarozium (now a narrow, long strip of white fabric on the back and chest, similar to a tie), which one can now use. d. R. used to recognize the Augustinian Canons. In the choir they wear Rochett and Mozetta . Other regulated canons continue to wear their traditional attire, e.g. B .: tunic , scapular and Zingulum , possibly Caputium and biretta, also in unison Rochett and mozetta or Almutium - all in white - in the Premonstratensians .

Bannita is the place of jurisdiction of the canons within ecclesiastical immunity . In this place a different right was pronounced than outside of immunity. A preserved bannita is in Xanten with the statue of St. Viktor from 1468, which still stands on a Hohenstaufen capital .