His parents are the former Spanish royal couple Juan Carlos I from the House of Bourbon-Anjou and Sofia from the House of Schleswig-Holstein-Sonderburg-Glücksburg . On his mother's side he is a grandson of King Paul I of Greece and Friederike of Hanover . His sisters are Elena (born December 20, 1963) and Cristina (born June 13, 1965).

Felipe VI. was born on January 30, 1968 in the Clínica de Nuestra Señora de Loreto hospital in Madrid . On February 8, 1968, he was baptized in the Zarzuela Palace by the Archbishop of Madrid, Monseñor Casimiro Morcillo . Godparents were his grandfather, Count of Barcelona, Juan de Borbón y Battenberg, and his great-grandmother, queen widow Victoria Eugénie von Battenberg .

During the so-called transition from the Franco regime to democracy in Spain, there was an attempted coup by the Spanish military on February 23, 1981 , against which his father stood as head of state. The then 13-year-old Felipe had to stay with his father in his study while he consulted with his officers for hours. At night, the King made a televised address in the uniform of the Commander in Chief of the Armed Forces in which he spoke out in favor of democracy. Prince Felipe was near him all the time; Juan Carlos later justified this educational measure as follows:

"He should see how I do my job when everything is in question."

After the putschists gave up, the parents sent their son to school as usual the next day.

Prince Felipe began his schooling at Colegio Santa María de los Rosales in Madrid and graduated in 1985 from Lakefield College School , Toronto , Canada . From 1985 to 1988 he went through various stations in the three branches of the army , navy and air force of the Spanish army .

Felipe is a graduate of the Autonomous University of Madrid , where he studied law from 1988 to 1993 , and the Jesuit- led Georgetown University in Washington, DC , where he obtained a master's degree in international relations in 1995 . He is the first Spanish king to graduate.

Felipe married Letizia Ortiz on May 22, 2004 in Madrid . They have two daughters together: Crown Princess Leonor was born on October 31, 2005 in Madrid and baptized on January 14, 2006. The godparents are the grandparents, Juan Carlos I and Sofia . Leonor is number one in line to the Spanish throne . The second daughter, Infanta Sofía , was born on April 29, 2007 in the Ruber Internacional Hospital in Madrid and was baptized on July 15, 2007 in the Palacio de la Zarzuela in Madrid. Her godparents are Paloma Rocasolano, Letizia's mother, and Konstantin Sakskoburggotski, son of the former Tsar Simeon II of Bulgaria. Sofía is named after her grandmother and is second in line to the Spanish throne.

Before marrying Letizia, two of the current king's former friends had rejected his parents as “not befitting”, including the Norwegian lingerie model Eva Sannum. The middle-class Letizia is the daughter of a journalist and a nurse and was briefly married before.

Felipe's birth ensured traditional Spanish inheritance, favoring male heirs over women. Since November 22, 1975, the day his father Juan Carlos I was proclaimed King of Spain , he was designated heir to the throne. 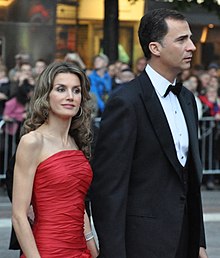 Felipe of Spain with his wife Letizia (2010)

On his 18th birthday, January 30, 1986, the Crown Prince was sworn in to the Spanish Constitution in a state ceremony in front of Parliament . He made his first official visit to Germany in the summer of 1991 to see Federal President Richard von Weizsäcker in Bonn. The heir to the throne then opened an exhibition with works by the Catalan Salvador Dalí with Federal Foreign Minister Hans-Dietrich Genscher in the Museum of European Art (NRW) . Felipe later made almost 200 official trips to 60 countries on behalf of his father. In recent years, Felipe has represented the Spanish royal family, often with his wife, at international events such as sporting events or dynastic weddings. He is fluent in French and English, has often traveled to Latin America as his country's envoy and is familiar with its culture.

During the indignados ('indignant') protests in May 2011 , activist Laura Pérez Ruano asked Prince Felipe whether he would “have sufficient decency” to propose a referendum on the form of government in Spain if he took office. Felipe replied that it was not up to him to call such a referendum.

In preparation for the office of king, his father gave him the following advice:

“Here you have to earn the throne over and over again, day after day, month after month, year after year. And if you have the people against you, you can pack up. "

Protest rally in Madrid, flags from the Second Republic period

Scandals such as King Juan Carlos' elephant hunt during a luxury safari in 2012 in the midst of the recession, the publicity of his affairs and the financial scandal surrounding his youngest daughter Cristina and her husband Iñaki Urdangarin suffered greatly from the reputation of the monarchy in Spain. At the beginning of 2014, support for the monarchy in surveys fell below 50 percent for the first time.

Against this background and due to health problems, Juan Carlos announced his abdication on June 2, 2014 , which took effect on June 18 at midnight. Felipe VI. ascended the Spanish throne on June 19.

Previously, thousands of people in Madrid demonstrated for the abolition of the monarchy. Left and green parties in particular had called for protests against the monarchy in numerous other cities. Many demonstrators called for a referendum and waved red, yellow and purple flags from the time of the Second Republic. 30,000 people are said to have gathered on Madrid's Puerta del Sol alone . The Spanish media response, however, remained mild.

An organic law that was subsequently drafted by the government regulating the early succession to the throne was passed by parliament and the senate. The complete text reads:

"1. His Majesty King Juan Carlos I de Borbón renounces the Spanish crown.
2. The abdication becomes effective at the moment the present organic law comes into force. "

The organic law came into force on June 19th when it was published in the Spanish Official Gazette. The former royal couple should officially continue to be addressed with the honorary title "Majesty". In the order of precedence of the protocol is Felipe VI. with Letizia and the daughters Leonor and Sofía in front of his parents. Male heirs retain preference in the line of succession.

In view of the Spanish economic crisis, enthronement ceremonies were modest. With around 6,000 security guards, the greatest security precautions have been taken in years. The police banned counter-demonstrations in the city center.

According to a survey by the daily El País , around two thirds of Spanish citizens are in favor of a vote on the continued existence of the monarchy, which, however, according to various polls, is in favor of a majority. 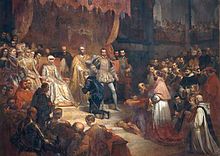 In recent European history there have already been some changes to the throne by renunciation. A precedent is significant in Spain's history: In 1555, Emperor Charles V , King Charles I of Spain, gave his son Philip II a global empire shortly before the height of its expansion.

After Felipe's proclamation as the new king, he was the youngest monarch in Europe at the age of 46. He stayed with his family in a villa that was built for him on the shielded grounds of the Zarzuela Palace . He conducts official business in the old Zarzuela Palace.

Less than two weeks after his enthronement, he and his wife began their first foreign trip in office to Rome, for a private audience with Pope Francis in the Vatican .

After the controversial Catalan independence referendum in October 2017 , he said in a televised speech that the situation in Catalonia was extremely serious and that the rule of law and proper self-government in Catalonia were in danger. He reaffirmed his unconditional commitment to the unity of Spain, the defense of the constitution and the respect for the law against an intolerable attempt by the pro-independence advocates to usurp the institutions and divide society.

As Crown Prince, Felipe was a member of the Spanish sailing team at the Summer Olympics in Barcelona in 1992 and was the bearer of the Spanish flag at the opening ceremony. In the Soling competition he reached sixth place.

On the subject of football, he identified himself as a supporter of Atlético Madrid , the club from the working-class neighborhoods in the south of the capital, which is more like a club for ordinary people. Unlike his father, Felipe does not believe in hunting or bullfighting .

In February 2014 King Juan Carlos announced that he had fixed annual salaries for his family members for the first time. Until then, he had not published the donations in detail and had estimated them depending on the number of public appearances. As in the previous year, he himself received a total of 293,000 euros, son Felipe 146,000 euros. The total budget of the royal family in 2014 was 7.8 million euros. Costs for business trips, vehicles, security measures and building maintenance were not included.

According to press reports, with Felipe's accession to the throne, only the new monarch couple, their two daughters, as well as the previous king and his wife, should take on representative functions and receive a salary from the state treasury. Felipe's older sisters are no longer considered. It can still be assumed that the total cost of maintaining a Spanish royal family will be in the double-digit millions, and taxes must be paid on the royal salaries.

On January 21, 1977, by decree, he was given the title of Prince of Asturias (Spanish Príncipe de Asturias ), along with the following: Prince of Girona (Spanish Príncipe de Gerona, Catal . Príncep de Girona ), heir to the Crown of Aragón , Prince of Viana (Spanish. Príncipe de Viana ), heir of the Kingdom of Navarre and Duke of Montblanc (Catal. Duc de Montblanc ), Count of Cervera (Catal. Comte de Cervera ) and Lord of Balaguer (Catal. Senyor de Balaguer ) . In accordance with Article 57, Paragraph 2 of the Spanish Constitution, these titles passed to his eldest daughter Leonor when he ascended the throne. Since then, Felipe himself has been entitled "King of Spain" under Article 56, Paragraph 2 of the Spanish Constitution of 1978. He can also use “the other titles to which the crown is entitled”.

Felipe has an unusually long list of titles, even for a monarch. The titles traditionally due to the crown, which he called His Majesty Don Felipe VI. de Borbón y Grecia are the following:

Habsburg titles also appear in this title . They are relics from the period of the rule of the Habsburgs until 1700, which were adopted by the subsequent Bourbons.