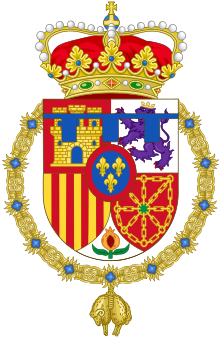 Coat of arms of the Prince of Asturias 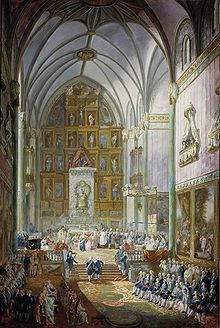 The title not only refers to the Principality of Asturias established by King John I in 1388 to provide material for the heir to the throne , but also contains an intended historical reminiscence of the former Kingdom of Asturias , which defied the Arab conquest of the Iberian Peninsula from 711 onwards Christian Visigothic residents remained as the last base of retreat and was therefore seen as the nucleus of the Reconquista . The old Kingdom of Asturias or Asturias-León was incorporated into the Kingdom of Castile in the 13th century. By giving their heirs to the throne the title of Prince of Asturias, the Castilian rulers invoked the traditional spirit of Christian resistance against Muslim Al-Andalus , whose recapture was only completed with the capture of Granada in 1492.

The title of Prince of Asturias has survived all political and constitutional upheavals in Spain and has been held again by the Spanish Crown Prince since 1977 after the interruption caused by the Second Republic and the Franco dictatorship .

Previously, the award of the title was celebrated with a grand ceremony during a meeting of the Cortes. The Cortes swore to recognize the heir to the throne later as king and the heir to the throne (if he was already able to do so himself) swore to obey the old laws and to remain loyal to his father. According to the current constitution , the Principe de Asturias swears in front of the assembled members of both houses of the Cortes Generales , when he reaches the age of majority, to faithfully fulfill his duties, to observe the constitution and the laws, to protect the rights of citizens and the regions and to be loyal to the King.

The title of Príncipe de Asturias is due to the heir to the throne by virtue of Article 57, Paragraph 2 of the Spanish Constitution of December 27, 1978 from birth or when he gains the first position in the line of succession.

The word Príncipe (from Latin princeps , "the first"), which can be translated into German with either Prinz or Fürst , is correctly translated here as Fürst . In general language, however, the term Prince of Asturias has prevailed, since in German usage the children of a monarch or prince are usually referred to as princes or princesses and the title Príncipe de Asturias is firmly linked to the position of the crown prince, so that its bearer is always also associated with it Is Prince of Spain. Royal children as such are not referred to as "princes" ( príncipe or princesa ) in the Spanish monarchy , but rather as " infants " ( infante or infanta ). Although the Spanish heir to the throne does not have a special constitutional position in today's autonomous community " Principality of Asturias " ( Principado de Asturias ), the translation of the title with " Prince of Asturias" is to be regarded as more accurate in view of the traditional territorial reference and the Spanish word usage ( a similar phenomenon can be found with the title Prince of Wales in relation to the British royal family).

The persons named by the Carlist pretenders to the throne are not mentioned in this list . The people who were in the first place in the line of succession without an official proclamation as the heir to the throne are also missing in the following list. These are Maria Teresa and Luisa Fernanda and Alfons of Bourbon-Sicily . The Roman numerals indicate the 2004 numbering of the Royal Academy of Heraldry and Genealogy.