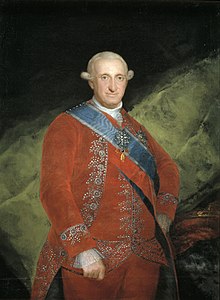 Karl was the second son of Karl III. and his wife Maria Amalia of Saxony . He was born in Portici while his father was King of the Two Sicilies . His older brother Philip was passed over in the line of succession because he was an epileptic and was seen as more retarded than Karl. Karl had inherited the stature and strength of the Saxon line from his mother, a granddaughter of Augustus the Strong . In his youth he liked to wrestle with the strongest men that could be found. But he was generally felt to be mentally slow and easily influenced.

On September 4, 1765 he married the thirteen-year-old Maria Luise von Bourbon-Parma , his first cousin , while still Prince of Asturias . This marriage was intended to strengthen relations between the Bourbons ruling Spain and Parma . According to Francisco de Goya , his wife was the dominant part in this marriage.

Even when Karl's father was still alive, Maria Luise engaged in an intrigue to have the king's favorite minister, Count Floridablanca , deposed. Their goal was to install Pedro Abarca , Count of Aranda, in Floridablanca's place.

In 1788 his father, King Charles III died. of Spain, he became King of Spain as Charles IV and his wife Maria Luise became Queen of Spain as wife. She soon began to interfere in the affairs of the state and keep changing lovers.

Manuel de Godoy , an officer in the Spanish Army, was the Queen of Spain's lover from 1788 to 1808. It is therefore very likely that the youngest of Maria Luise's 14 children are not her husband's biological children, but come from the connection with Manuel de Godoy.

After Karl became king in 1788, he was almost exclusively engaged in hunting. He left the official business to his wife and thus also to Manuel de Godoy, whom the king held in high esteem despite his relationship with his wife.

When the French Revolution from 1789 terrified the mansions of Europe, Karl called on Godoy and his wife's suggestion to help the Holy Inquisition . He deeply believed in his divine rights and the majesty of himself . He wanted to appear as a powerful monarch, although France viewed Spain more as an appendage and his reign was exercised by his wife and her lover. Spain first joined the first coalition against France in 1793 , but then concluded an alliance with France in 1798, from which it initially withdrew after the Battle of Trafalgar .

When Napoleon won the battle of Jena and Auerstedt , Godoy renewed the alliance with France in 1807, which the Spanish people rejected. In Spain, Godoy's failures supported the Fernandists , who favored an alliance with England.

When Karl learned that his son Ferdinand had asked Napoleon for help against Godoy and that French troops were marching into Spain, the royal family fled to Aranjuez . On March 17, 1808, the Aranjuez mutiny broke out, the king was arrested and forced to have Godoy arrested. The next day his son was celebrated by the people as King Ferdinand VII , but had to surrender the crown again on May 6th after a failed uprising in Madrid under pressure from the French. Karl, his wife and Godoy fled to France, where Karl was forced in favor of Napoleon's brother Joseph Bonaparte to the throne of Spain refrain . Karl was awarded a pension and spent the rest of his life traveling with his wife - and her lover Godoy. On January 20, 1819, Charles died in Rome and was buried in the pantheon of the kings of the El Escorial monastery .

The plant genus Carludovica Ruiz & Pav. From the family of the disk flower family (Cyclanthaceae) is named after Charles IV and his wife Maria Luise von Bourbon-Parma.

On September 4, 1765 he married Maria Luise von Bourbon-Parma with whom he had the following children: