The divine right is a justification for monarchical claims to rule . The term developed from the Latin title addition Dei gratia ("by God's grace ").

The concept of divine right has its starting point with the Carolingian kings of the Franconian Empire . Their predecessors from the dynasty of the Merovingian founded their claim still alone on the right of blood and the King of salvation that has been transferred from the rightful king to his biological offspring. Pippin the Younger , the first Carolingian on the Frankish throne, who had deposed his Merovingian predecessor, therefore needed a new legitimation for power. He obtained the Pope's approval for the change of dynasty and was anointed king in Soissons in 751 in a sacred coronation ceremony modeled on the biblical rulers of Israel . Since this anointing , a novelty in the act of king's elevation, the Franconian king's documents contain the formula Dei gratia .

The idea of ​​a rule bestowed by divine grace is based on the late antique Christian image of the king rex iustus , the "just king", which goes back to Augustine of Hippo ( De civitate Dei ). The Frankish tradition founded by Pippin was continued by his son, Charlemagne . Especially after his coronation as emperor in the year 800 he saw his rule - based on ancient and Christian ideas - legitimized by divine law . Titulatures such as a deo coronatus imperator , "Emperor crowned by God", testify to this . Karl understood his empire as a unity of state , church and religion .

Image plate in the imperial crown of the Holy Roman Empire: Christ flanked by two angels, above the motto P (er) me reges regnant ("The kings rule through me")

Otto I had the formula Dei Gratia added to the East Franconian royal seal in 936, the year he ascended the throne . In the imperial crown of the Holy Roman Empire , created around the year 1000 , the Old Testament motto Per me reges regnant "The kings rule through me" ( Book of Proverbs 8:15) refers to the divine right of their bearers. The conviction of divine grace also echoed in the coronation oath of the German kings. It begins with the formula "Nos divina favente clementia rex Romanorum [...]" - "We, by the grace of divine grace, King of the Romans [...]".

The Christian-based legitimation concept of divine right turned out to be more convincing than the idea of ​​the salvation of the king, which was already demonstrable among the Teutons in pre-Christian times . The idea of ​​divine right gradually faded into the background, even if the paganist idea of ​​the special healing powers that the gods bestowed on the legitimate king was never completely lost. In the imagination of Roman antiquity, the emperors had the role of a pontifex maximus during their lifetime , that is, the role of a mediator between the gods and man; after death they could themselves ascend to gods ( divi ) ( apotheosis ) due to the imperial cult .

Salian and Staufer emperors of the Holy Roman Empire tried to use the Christian idea that the ruler was appointed by God over his subjects to justify the view that the secular ruler had an independent claim to rule over the Pope ( doctrine of two powers ).

The divine right is given concrete form in the New Testament . The Epistle to the Romans ( Rom 13.1 to 7, obligations towards the state  EU ) explains the Christian idea that each state authority bestowed by God and resisting this violence a violation of the will of God is:

“Everyone should obey the bearers of state power. For there is no state authority that does not come from God; each one is instituted by God. Anyone who opposes the state authority is against the order of God, and whoever opposes it will be subject to judgment. "

After the Norman conquest of England in 1066, the Curia Regis ("Court of Justice", "Royal Council") replaced the Anglo-Saxon Witenagemot . The "Court of the King" slowly developed into the English Parliament after the rebellion of English nobles forced King John Ohneland to recognize the Magna Charta in 1215 .

In the Holy Roman Empire of the German Nation , peasants rose up in the German Peasants' War to demand certain rights of freedom .

In his 1525 work, Against the Mordische und Reuberischen Rotten der Bawren, Martin Luther justified the violent action of the princes against the peasants with the divine right of princes guaranteed in Roman letters.

In the same year, Luther stated in the text De servo arbitrio that man should not rebel against the relations of domination provided by the grace of Christian God, because this would contradict the theology of predestination .

Luther thus provided a basis for absolutism's understanding of rulership : because of the New Testament divine right, a Christian ruler can neither be removed nor prevented from exercising his reign in any other way . This understanding of rule was decisive in Christian-Western Europe until the time of the French Revolution . Prominent representatives were the Bourbons in France , the ore house of Habsburg and the Russian tsars .

Under the Habsburg monarchy in Germany as well as in Bourbon France, divine right was expanded to include arbitrary religious setting for subjects according to the rule cuius regio, eius religio . This led to numerous alleged religious wars in order to consolidate the respective absolute rule of the Catholic monarchs.

In England , over a decade-long development , parliament wrested powers from kingship. The Habeas Corpus Act of 1679 was a historic step towards the rule of law . The Glorious Revolution of 1688/89 with the Bill of Rights made the English Parliament the bearer of state sovereignty .

In the Declaration of Independence of the United States (1776), the monarchical divine right was negated with the formula all men are created equal ("All men are created equal ") written by Thomas Jefferson . Thomas Paine had already expressed the same idea in 1776 in his Common Sense . It is based, for example, on the equality of the first humans described in Genesis and can be found in John Locke's state philosophy, which argues based on natural law . However, slavery in the United States was against the principle of equality . Even racism is incompatible with the principle of equality. 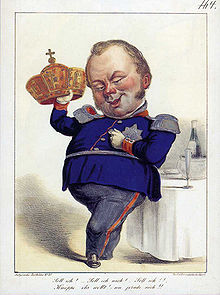 Friedrich Wilhelm IV. Of Prussia rejects the imperial crown proposed to him by representatives of the people, insofar as it is linked to the idea of popular sovereignty (political caricature by Isidor Popper , 1849).

The romantic and Protestant Friedrich Wilhelm IV of Prussia , to whom the German people's representatives proposed a German hereditary empire with the Paulskirche constitution in 1849 , declined because the role of the monarch was determined by the idea of ​​divine grace. A democratically legitimized emperor enthroned over a sovereign people - Friedrich Wilhelm rejected such enlightened thoughts and thus contributed to the failure of the bourgeois, democratic and national aspirations of the March Revolution in Germany. In some cases, the princes of the time added the addition VGG for “by God's grace” to the inscriptions of their coins in order to underline the assertion of God's grace. The omission of the addition VGG on a thaler of the Kingdom of Hanover in the revolutionary year 1848 led to the fact that it was popularly referred to as " fear thaler ".

King Ludwig II of Bavaria still resorted to the pre-Enlightenment notion of divine right in the second half of the 19th century when he had the throne room built in Neuschwanstein Castle in the shape of a Byzantine church and instead of an altar wanted to put a throne , which however was never completed. However, it must be said here in a restrictive and explanatory manner that Ludwig II by no means wanted to understand the “kingship” in Neuschwanstein (as well as in Herrenchiemsee) as his political kingship of Bavaria at the time. Rather, this “throne room” was a literary-late romantic invention - as a homage to the past - just as the whole castle was supposed to be a “walk-on stage” (Rauch) to be transported back to past, literary worlds. Ludwig II also by no means intended to claim the absolutism of France for his time. In his Herrenchiemsee Palace, he wanted to worship the art of that time and its clients.

The last German head of state to invoke divine right was Wilhelm II. His imperial motto was “ God with us ”.

As a title in constitutional monarchies

The monarchs of Denmark (Protestant-Episcopal), Liechtenstein (Catholic), Monaco (Catholic) and the United Kingdom (Anglican-Episcopal) still use the addition “by the grace of God” in their major title . However, this title no longer plays a more than ceremonial role, as the politics of all these countries is predominantly determined by elected parliaments and governments.

Even today, the addition DG (for: Dei Gratia ) is emblazoned on British coins after the name of Queen Elizabeth II.

In the age of constitutional monarchies , a distinction must be made between the legitimation of an absolute ruler and the question of who appointed the head of state. A believing monarch who owes his position to the succession understands his office as given "by God". This conception of legitimacy in the sense of legal succession was decisive for the restoration of the old dynasties in the time of the Restoration after the Napoleonic upheavals.

According to Ricarda Huch , divine grace is no justification for an absolutist power “from top to bottom”, derived for example from deist ideas of God. In the Holy Roman Empire, the princes would have used their interpretation of the letter to the Romans and God's grace to expand their power against emperors, other classes and the population absolutistically. According to the Hezekiah picture plate in the Ottonian imperial crown , God's grace is also or especially to be understood as a gift of time from God : Ecce adiciam super dies tuos XV annos - "Well, I want to add 15 years to your years of life" ( Isa 38,5  EU ) .