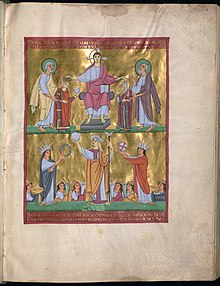 Kunigunde of Luxembourg (* around 980 in what is now Luxembourg or at Gleiberg Castle near Gießen ; † March 3, probably 1033 in Kaufungen ) was the wife of Emperor Henry II (the last ruler of the Ottonians) and led after his death for a short time Time also the affairs of state of the East Frankish-German Empire . Like her husband, she is one of the saints of the Catholic Church and is especially venerated in Bamberg . In addition, Kunigunde was the first empress after the turn of the millennium.

So-called “box of St. Kunigunde ”(Scandinavia, around 1000) from the Bamberg Cathedral Treasure, today in the Bavarian National Museum , Munich

Kunigunde was born as the eighth child of Count Siegfried I of Luxembourg and his wife Hadwiga. She had ten siblings in total. These were, on the one hand, her brothers, Duke Heinrich V of Bavaria , Siegfried, Giselbert, Count Friedrich , Bishop Dietrich II., Albero and, on the other hand, their sisters Liutgard (wife of Arnulf of Holland ), Eva (wife of Count Gerhard III. Von Metz), the abbess Ermentrude, and a sister (wife of Count Dietmar), whose name is unknown. Both her paternal grandfather and her paternal great-grandfather remain unknown. She had Carolingian blood through her paternal grandmother: this Kunigunde , mother of Count Siegfried I of Luxembourg, was the daughter of Ermentrud and granddaughter of King Ludwig II of West Franconia .

Shortly after 995 she married Duke Heinrich IV of Bavaria (later Emperor Heinrich II) from the Bavarian line of the Liudolfinger family . The marriage remained childless and was transfigured by later legends as the Joseph marriage .

In 1002 Archbishop Willigis of Mainz consecrated Kunigunde in Paderborn as queen. This act represented the first coronation of a queen in German history, while her predecessors were immediately crowned empresses. She was probably anointed and crowned on August 10th, since it is Laurentius Day, which was of great importance for the Ottonians in terms of military success. In addition, Paderborn was most likely chosen as the location, as it was one of “the most important bases of royal rule in Saxony ”.

In 1014 she was crowned empress in St. Peter's Basilica in Rome at the side of her husband by Pope Benedict VIII. The anointing and coronation that were bestowed on her in 1002 cannot be proven in earlier Roman-German queens. The royal and sacred legitimation of the ruler thus also applied to them.

For the furnishing of the diocese of Bamberg , Kunigunde had to provide her safe widows property in 1007/1008 , because the city of Bamberg had actually been transferred to her by her husband as a marriage property. There is no indication that Kunigunde did not support this pious foundation. The famous manuscript of the Bamberg Apocalypse had the inscription on its cover: "Heinrich and Kunigunde bring you these presents" ( Henric et Kunigunt haec tibi munera promunt ). Extensive dispositions of Kunigunde over imperial property were partially reversed by Heinrich's successor, Emperor Konrad II .

If Kunigunde's resignation in favor of Bamberg had already led to tensions with her family, Heinrich's refusal to transfer the office of Archbishop of Trier to her brother Adalbero , provost of St. Paulin in Trier , led to an open conflict with the Dietrich brothers II, the Bishop of Metz , and the Bavarian Duke Heinrich V of Bavaria . The uprising of the Luxembourgers was put down by Heinrich.

In April 1024 Kunigunde is attested for the last time on Heinrich's side in Goslar, whereas her presence on his deathbed in Grone (today part of Göttingen) in June of the same year is not known. During the approximately two-month vacant throne after the death of her husband, Kunigunde, with the help of her brothers Dietrich and Heinrich, ran the imperial affairs unchallenged. It also kept the imperial regalia in its power. As a token of legitimation, she handed it over to the new King Konrad II after his election . Kunigunde was the first queen to keep the imperial insignia and hand it over to the new king.

The royal court in Kassel went out for her from her marriage to Heinrich in 1008, near which she founded the Kaufungen monastery . On the first anniversary of Heinrich's death, she entered the Benedictine monastery she had founded as a nun . According to her vita, this was a symbolic entry into the monastery. She died there (according to the most reliable evidence) on March 3, 1033. She probably found her first burial place in the monastery church there .

Kunigunde appears more clearly as an independent politician than her predecessors. One of her advantages over the Empress Theophanu was that she came from an ascending family from Upper Lorraine and was therefore able to establish many relationships even before her rule. With intervention (named as advocate in the royal documents) and mediation in political conflicts, their participation in the royal rule is to be grasped. Kunigunde names about a third of Heinrich's documents as the intervener. She stood by her husband in word and deed, for example as the king's deputy for border security in Saxony in 1012 and 1016 as proof of her courageous fighting spirit on the edge of campaigns and fighting. She was always vigilant with the imperial business and informed her husband about new situations, as her quick reaction after the death of Archbishop Walthard, the royal administrator in the endangered Saxony, shows.

With foundations, donations and prayer associations she took care of the memoria of the ruling house. In a lengthy process, she founded the Benedictine convent Kaufungen near Kassel (after Thietmar von Merseburg in 1017 on the basis of a vow). 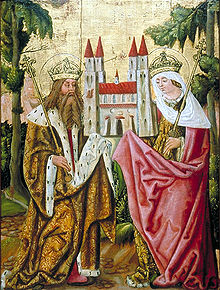 Legend has it that Heinrich II. 1146, canonized more than a hundred years after his death, should not have endured that his wife was not worshiped as well. The Legend of Cunegonde was to enter a judgment of God to prove their innocence with respect to an allegation of adultery, on hot plowshares run (or over hot coals) and unharmed. This was seen as a sign of their chastity and holiness.

On April 3, 1200, Pope Innocent III announced. their canonization. Two copies of the canonization certificate have been in the State Archives in Bamberg since 1992. A year later, on September 9, 1201, her bones were raised in an altar in Bamberg Cathedral . It cannot be clarified whether Kunigunde was not buried in Kaufungen after all. In 1513, Tilman Riemenschneider completed the marble grave monument in Bamberg Cathedral for the two holy founders of the diocese, Heinrich II and Kunigunde, to which the relics of the imperial couple were transferred on September 2, 1513 .

In the late Middle Ages, Kunigunde overtook her husband as a popular saint in Franconia and especially in the diocese of Bamberg. Her Mary-like reputation as “queen and virgin”, which corresponded to the medieval ideal of piety, may have contributed significantly to this. Even in the Second World War , pious Bambergers are convinced, Kunigunde is said to have saved their city from the Allied bomber units with a veil of fog.

In 1511 a German-speaking couple of saints to Heinrich and Kunigunde from the pen of the Benedictine monk Nonnosus Stettfelder appeared in Bamberg with 18 woodcuts. It is essentially a translation of the Vita Cungegundis (around 1199). 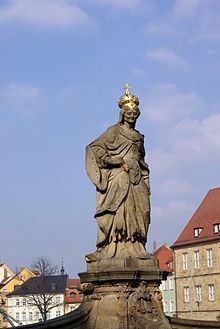 Statue of Kunigunde in Bamberg 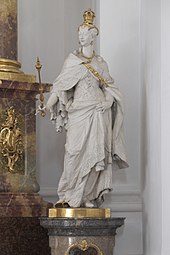 Kunigunde at the high altar of the Church of St. Marinus and Anianus in Rott am Inn

As in his political activities, Henry II often included his wife in the ruling representation. In commissioned works during the king's lifetime, which served as gifts, proof of royal favor or as objects of representation, depictions of the couple can be seen. On the Basler Antependium , donated in 1019, they are found as so-called donor figures, vanishingly small in adoring posture at the feet of Christ. Both persons can also be seen in the coronation pictures of the Bamberg Pericope Book (made on the island of Reichenau ) and the sacramentary from Regensburg , which are believed to have been made before 1014.

After Kunigundes canonization, there were representations in church art , especially in the Franconian area. As the founder of the cathedral and diocese of Bamberg, Kunigunde can be seen together with her husband in the figure program of the robes of the Adam's gate at Bamberg Cathedral. This garment, which was created around 1235, is the most important monumental representation of Kunigunde in the High Middle Ages . There it has a church model as an attribute. However, its common attribute is a ploughshare, as legend has it that it went over glowing ploughshares. This scene is depicted on the limestone tumba in Bamberg Cathedral, created by Tilman Riemenschneider between 1499 and 1513. Occasionally Kunigunde appears with the widow's veil or as a nun with a book. In the diocese of Basel she is always represented with a cross, probably with reference to the so-called Heinrichskreuz donated by her husband in 1019. As an elaborately designed baroque figure, Kunigunde can also be seen on the high altar of the former monastery church of St. Marinus and Anianus in Rott am Inn . This figure was created by the sculptor Ignaz Günther between 1759 and 1762 . At the Maximiliansbrunnen in Bamberg from 1888 she appears as ruler without any specific attribute.

Several linden trees , some of which are up to 1000 years old, bear witness to Kunigunde's popularity in Franconia, for example in Kasberg ( Kasberger Linde ), Graefenberg , Burgerroth and in the courtyard of Nuremberg Castle (replaced in 1934). There is also a Kunigunden linden tree in front of the Kaufungen collegiate church . Several legends refer to the empress who is said to have got lost in the forest. After her rescue, she donated churches and chapels to the neighboring communities. In Seinsheim in what is now Lower Franconia, the donation of the so-called Kunigunden Forest is projected onto the saint.