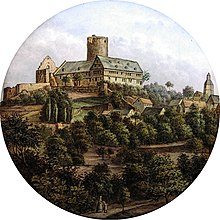 View from the northwest

The Gleiberg Castle with the surrounding village of Gleiberg is an eponymous part of Krofdorf-Gleiberg and belongs to the municipality of Wettenberg in the district of Gießen in Hesse .

The summit castle is located on the 308  m above sea level of the same name . NHN high Gleiberg .

Not far away, between Gleiberg and Dünsberg , lies the Vetzberg castle ruins , a former second castle of the Counts of Gleiberg.

Already the Konradiner used the Gleiberg as the location of a castle. It is possible that the castle was built by Otto, the brother of King Konrad , as a fortress against the Popponen .

Heribert von der Wetterau made the castle the residence of his county of Gleiberg in 949 . After his death, the castle came to his son-in-law Friedrich von Luxemburg , the founder of the Luxemburg count house . The castle is considered to be the possible birthplace of Empress Kunigunde around 980.

In 1103 King Henry V conquered the castle and had it destroyed. Only after the second line of the Counts of Gleiberg had split off from the Counts of Luxembourg, the castle was rebuilt in the 12th century.

A well-known historical figure from the 12th century is Clementia von Gleiberg. In 1129 she founded the Augustinian Canon Monastery on the Schiffenberg near Gießen.

After the Merenberger died out with the death of Hartrad VI. the castle fell to the house of Nassau-Weilburg in the 14th century . It became the center of the "Land on the Lahn", but no longer had a residence function.

During the Thirty Years War the castle was destroyed in 1646 by the troops of Landgravine Amalie Elisabeth von Hessen-Kassel . Since it was no longer of any military importance, it was not rebuilt. On June 30, 1816, the castle was exchanged from the Duchy of Nassau to the Kingdom of Prussia .

In the 18th and 19th centuries, the Gleiberg was often the target of protest marches by students at the University of Giessen. The inn "Zur Spießpforte" at the foot of the castle, which has been documented since the 16th century, also became famous. Since around 1860 it has been called "To the Black Whale". The Gießen Wingolf was founded here on August 15, 1852 . According to tradition, the restaurant “Zum Schwarzen Walfisch” was the founding establishment of the “Hermanus” Gleiberg choral society, the oldest predecessor of today's Gleiberg choir. On May 7th, 1870, the Giessen Free Student Association (today's Giessen Burschenschaft Adelphia) was founded in the castle ruins.

From the parking lot below the upper castle, you reach the ruins of the castle with the built in 1200 imposing castle keep . It has a front and rounded mantle wall and is 30 m high. Up to the former high entrance at a height of 15 m , the tower has a diameter of about twelve meters, above it it tapers to eleven meters. In the area of ​​today's entrance, the wall thickness is a good four meters. Inside, a concrete staircase with 150 steps leads to the viewing platform , which is designed as a counterclockwise spiral staircase over 54 steps . Above this, the inner diameter of the keep expands from 3.7 meters to 5.7 meters and the stairs lead via a left-hand staircase with a number of straight segments and ledges to the covered exit onto the platform. The staircase is illuminated by motion detectors by lamps and a glazed opening in the floor of the platform, on which a metal grid pyramid is placed for protection. From the platform on the keep, on which a permanently installed telescope is attached, you have a beautiful view over the Giessen basin to the Vogelsberg , the Westerwald and the Taunus . The keep was thoroughly renovated in 2013 and has been in a very good appearance ever since.

The ruins of the palace with a still standing gable wall and pointed arched doors date back to the 13th century. You can see the light slits in the cellar vault. The castle is surrounded by a curtain wall, was built on a slightly higher site and was defensible on its own.

The ruin is now a popular destination. Since 1879 the ruin has been owned by the Gleibergverein, which endeavors to preserve it. The restaurant "Burg Gleiberg" with beer garden is located in a building in the inner courtyard of the lower castle.

Castles and palaces in Hessen in the district of Giessen