The title of this article is ambiguous. Further meanings are listed under circular wall (definition of terms ) .

The curtain wall (also main wall , enclosing wall , outdated also Zingel ) is a defensive wall that surrounds the inner area of ​​a castle or a similar fortification . The entirety of the curtain wall is also known as the Bering , while a single section is called the curtain wall .

The circular wall can be laid out as a free-standing structure or in association with the outer walls of peripheral buildings. It not only offers passive protection to the areas behind it, but is usually also an essential part of the defensive system through the construction of battlements (often equipped with battlements ) and gun emplacements covered by loopholes .

The shape of the curtain wall, together with defense towers and residential buildings, shapes the silhouette of a castle. The shape of the ground plan circumscribed by the ring wall is often irregularly polygonal in the case of high-altitude castles, depending on the nature of the terrain ; in low- rise castles , regular rectangular ground plans are more often found (such as the fort castle type ).

From the 12th century onwards, the curtain wall was occasionally given a so-called Zwingmauer as protection. In some cases - depending on the type and size of the surrounding fortifications - several systems of walls (e.g. as kennels ) could exist, which were also used to keep dogs, wild boars or bears or in times of need to house cattle and not in the Baroque era have rarely been converted into pleasure gardens (e.g. in Dresden ). One could also encircle the enemy in these kennels if he had broken through the gate. 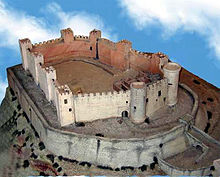 In the categorization of castles according to architectural aspects, one speaks of a ring wall castle when the ring wall dominates the shape of the castle as a largely independent structure. The other buildings of the castle are in this case distributed as subordinate buildings inside the Bering or, if they are lower, they can also be built with pent roofs on the inside of the curtain wall. A counterpart to the ring wall castle is the Randhausburg . In the case of peripheral buildings, the outer walls of peripheral buildings completely take on the function of the circular wall or are connected to it to form a structural unit (example: Büdingen Castle ). There are numerous transitions between the two forms. A gradual change from the curtain wall to the perimeter house can also take place in the various construction phases of a castle.

A mantle wall is a special type of curtain wall that resembles a shield wall (see below) due to its particular height.

In contrast to the curtain wall, a shield wall only shields a certain, particularly exposed and endangered side of a castle and was particularly thick and high (up to 5 m thick and sometimes over 30 m high).

A curtain wall is called a city wall if it does not include a fortification, but an entire settlement.

A ring wall has the same function as a ring wall, but it is a rampart .