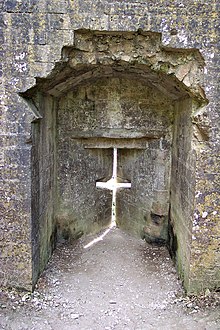 An embrasure ( Schießscharte ) is an opening within a fortification in fortresses , which allows a shooter to use a long-range weapon while providing high cover. Loopholes occur in various forms, especially at late medieval castles , fortified churches and modern fortresses . The shape results primarily from the functionality of the respective weapon for which the notch was created.

In castle construction, notches can be embedded in wooden components (e.g. in hurdles ) or in the masonry. From a certain wall thickness, a niche (the shooting niche ) must be created behind the notch so that the shooter has enough space to guide his weapon. Loopholes can be part of a parapet , a defensive tower or also of smaller rifle positions such as defense bay or guard towers .

Nicks for arches are shaped like a long vertical slit. The length results from the fact that the arrow is shot obliquely upwards at a longer distance and downwards at a short distance, so that there must be enough vertical space for the different firing ranges. The vertical bow also required a high shooting niche. Preserved bow nicks are comparatively rare, among other things because after the establishment of new long-range weapons such as the crossbow, older nicks were often rebuilt and adapted to the new functionality.

At a first, superficial glance, it is easy to mistake the vertical slits of light, which are often found in the Central European Mountain Peace, for example . However, these are not suitable for the use of bows because the shooting niche behind is missing. They are used exclusively for lighting and ventilating the interior of the tower.

Crossbow nicks have a vertical slot shape, but are lower and wider than bow nicks . The associated niche is also wider in order to provide enough space for the horizontally held weapon. Some crossbow notches also have short horizontal slits (e.g. the cross notch ). Since the crossbow bolts have a more elongated trajectory, the vertical slot opening can be lower and the entire construction can be made more massive and therefore more stable than with a bow hatch. 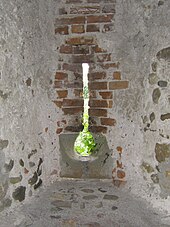 With the spread of gunpowder in the 14th century , the first firearms were soon developed, in particular hand rifles for the defense of castles and other fortifications. This made it necessary to have its own specialized notch shapes, the main feature of which is a circular opening for the rifle. The shapes are varied, the round opening can be combined with various types of viewing slits or peep holes. A common shape is the key notch , in which the opening is supplemented by a vertical viewing slot and resembles an upturned keyhole. Mixed forms were also developed that allowed the use of both crossbows and rifles.

With the development of firearms at the transition from the late Middle Ages to the early modern era , fortification also changed fundamentally. Fortifications were now increasingly massive, wider and lower (e.g. roundabout and bastion ) and a special trench defense was developed in the immediate vicinity of the fortress. A special notch shape is the horizontally aligned mouth notch , of which there are numerous variations.

At the fortresses of the First and Second World War , the notches were always provided with armor , as they represented a weak point in the entire structure. To improve protection, such openings were designed as minimal notches (→ minimal notch cannon ). With this design, the pivot point of the weapon was moved into the notch itself so that the associated opening was kept to a minimum. Movable armored domes with notches were developed at the end of the 19th century . In the event of a heavy artillery or bomb attack, these steel domes could be sunk in order to offer as few points of attack as possible.