Fortified church of St. Alban and St. Wendelin in Künzelsau-Morsbach 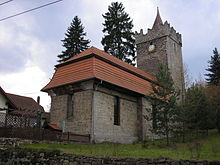 As fortified churches are called churches that are equipped with devices to ward off enemies, such. B. battlements , weir core , machicolations or loopholes are provided.

If the church is surrounded by a massive wall suitable for defense purposes, which also encloses other defensive structures, one speaks of fortified churches .

Often churches were partially fortified only in the 15th or 16th century or only symbolically provided with defensive elements.

Recent archaeological and architectural studies have shown that numerous supposed "fortified churches" do not have any structural elements that speak for a real defense-technical fortification or an active defense capability. Elements that are associated with military functions were also recognized as not belonging to the original building stock or as unusable for it, such as B. the alleged cast bay windows, which are mostly toilet bays , or loopholes, which are often only slit windows.

The misinterpretation of massive stone churches as fortified churches, especially in the area of ​​the so-called Ostsiedlung , occasionally leads to problematic ideas about local history . In the professional world, the term “escape church” has established itself in relation to defensive elements on sacred buildings for churches that could not withstand a siege lasting several days.

In the north of the country, numerous medieval churches in Thiérache were fortified with brick towers as église fortifiée during the Eighty Years War . These offered the village population protection from marauding mercenary troops.

In the Meuse department in the Lorraine region ( Lorraine ), also part of the Holy Roman Empire of the German Nation in the Middle Ages , numerous fortified churches were built, among which the following can be mentioned:

In Germany , the churches still of this type were given a final meaning during the Thirty Years' War as a refuge against the marauding Soldateska . Some of these systems have been preserved in Upper Franconia , Middle Franconia , East Thuringia, South Thuringia and the Rhön (e.g. in Hannberg , Grafengehaig , Dörrenbach , Kraftshof , Großgründlach , Veitsbronn , Vach , Bonese ). So-called gaden fortified fortified churches were surrounded by gaden that formed the outer wall. The adjoining churchyards were also sometimes turned into a military cemetery . In the Ore Mountains you can find churches that were provided with a defensive floor in the 3rd quarter of the 15th century, a floor placed on a building that was intended exclusively or mainly for defense. Churches of this type can be found in Großrückerswalde , Lauterbach , Dörnthal and Mittelaida . A similar construction method can be found in Dörrenbach / Pfalz and Bad Steben .

Most of the fortified churches are in Baden-Württemberg, Bavaria and Hesse. The northern border is formed by the low mountain ranges in Thuringia and Saxony (focus on the Ore Mountains). But this type of construction can also be found in the Weser Uplands . In the north German lowlands, shaped by the Ice Ages and their granite boulders, which led to the local history interpretation of the stone block churches as fortified churches, there is not a single example that is recognized according to scientific criteria. Nonetheless, there are field stone churches with an escape church character, such as the village churches in Rochau and Groß Möringen .

Fortified churches can be found mainly in Lower Austria , Carinthia and Styria , which suffered most from the incursion of Ottoman looters in the 15th century . There are also some round churches that can also be assigned to this type. The famous fortified church of St. Michael is located in the Wachau . In the Bucklige Welt a circular tour was signposted as a fortified church road

In Transylvania 150 churches, most of them in the settlement area of ​​the Transylvanian Saxons , were preserved from the time of the fight against the Turks .

In Switzerland , the fortified church of St. Arbogast in Muttenz near Basel is one of the few places of worship in the country that is completely enclosed by an almost circular curtain wall. The defensive wall of the churches of Boswil (Canton Aargau), Weiach and Schönenberg (Canton Zurich) is incomplete .

In Poland , the fortified church of Brochów (St. Rocco) is the most famous representative of its kind. It consists of three mighty towers and a rectangular enclosure. Among other things, Frédéric Chopin was baptized in it.

In Estonia there are a number of fortified churches from the late Middle Ages, which were created during the Christianization of the northern Baltic by the Livonian Order . There are particularly many fortified churches on the island of Saaremaa .

There are also some fortified churches among the Scandinavian round churches.