Middle Franconia ( abbreviation Mfr ) is located in the Franconian part of Bavaria and is both a district and an administrative district . It is located in the north-west of Bavaria and borders in the west on Baden-Württemberg , in the south and south-east on the Bavarian administrative districts of Swabia and Upper Bavaria , in the east on the Upper Palatinate and in the north-east and north on Upper Franconia and Lower Franconia .

As with Upper and Lower Franconia, the name Middle Franconia refers to its location on the Main . Upper Franconia lies on its upper reaches, Lower Franconia on the lower reaches and Middle Franconia in between. This name goes back to the establishment of the Mainkreis in the course of Count Montgelas' 1808 constitution of the Kingdom of Bavaria . The division of the territories was adapted to the French model and was primarily based on river names.

Before the district reform on July 1, 1972, the administrative district had eight independent towns and 17 rural districts:

Until after the Second World War, the administrative districts of Middle Franconia and Upper Franconia were administered together.

In Central Franconia there are numerous bodies of water that are used in a variety of ways and are particularly important for pond farming and tourism .

The Aischgründer carp has been protected throughout Europe since November 27, 2012.

In addition to numerous fish ponds, which are often located on streams, there are larger lakes , especially in the Franconian Lake District:

With the transition of Middle Franconian areas, in particular the Principality of Ansbach and the Imperial City of Nuremberg , to the new Kingdom of Bavaria in the Napoleonic period , the Rezatkreis was created with Ansbach as the capital. The administrative district has been called Middle Franconia since January 1, 1838, based on the former Duchy of Franconia , in whose eastern part it is located. From 1855 to 1933, the population of Central Franconia rose from 534,000 to 1,037,000. In the course of state simplification, the governments of Upper Franconia and Middle Franconia were united in Ansbach in 1932/33 . In 1946 it was decided to restore the Central Franconia administrative district. The first elections for the district assembly took place in 1954.

While the west of Middle Franconia around Ansbach, Gunzenhausen and Weißenburg is more rural, the industry is concentrated in the eastern part of Middle Franconia and there mainly on the urban network of Nuremberg, Fürth, Erlangen and Schwabach. In terms of GDP , Middle Franconia is one of the wealthier regions of the EU with an index of 134 (EU27: 100, Germany: 116; as of 2008).

The Police Headquarters Middle Franconia , together with the Federal Police and their precinct in Ansbach , as well as the inspection in Nuremberg, ensure security.

The Customs maintains the customs offices Harbor , Nuremberg Airport, Erlangen-Tennenlohe, Ansbach and white castle, which the Main Customs Office Nuremberg are subordinate. There is also a branch of the Munich customs investigation office .

The THW has 14 local branches and a regional office in Middle Franconia.

There are also 37 hospitals and specialist hospitals.

The Bundeswehr is represented by a company of the regional security and support forces (RSU) . A career advice office is located in Nuremberg. There are also other locations in Ansbach, Fürth, Röthenbach, Wendelstein, Roth and Greding.

All public transport in Middle Franconia can be used with just one ticket thanks to the transport association for the greater Nuremberg area. Leisure lines complement the transport offer on weekends and in the summer holidays. There are mostly good connections by rail, while the bus service often only meets minimum requirements outside of peak times, especially in rural areas.

In the administrative district there are 63 nature reserves , 91 landscape protection areas , 66 FFH areas , eleven EU bird reserves and 182 designated geotopes . (Status: August 2016) The largest nature reserve in the district is the Tennenloher Forest . 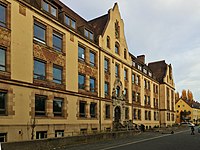 The Middle Franconia district is responsible for psychiatric and neurological specialist hospitals, specialist clinics, technical and special schools (e.g. for the deaf and disabled, the blind ) and open-air museums (in Bad Windsheim ). The district of Middle Franconia is also responsible for the vocational training center for the deaf and the vocational training center for people with learning disabilities .

The district of Middle Franconia awards the Wolfram von Eschenbach Prize, endowed with 15,000 euros, every year .

The crossing of silver and black at the top in front stands for the Hohenzollern possessions around Ansbach , the silver tips in red below stand for the historical region of Franconia (so-called Franconian rake ) as a whole. The eagle in gold comes from the coat of arms of the imperial city of Nuremberg and also stands for the former imperial cities of Dinkelsbühl , Rothenburg od T. , Windsheim and Weißenburg with their areas, which in the case of Rothenburg and Nuremberg (imperial city with the largest territorial possession on the soil of the today's Germany ) were not insignificant.

The flag of Middle Franconia is a red and white Franconian flag with the district coat of arms in the middle.

Stand according to the respective election.

² The CSU lost a district council during the legislative period by converting to the Bavarian party .

Not all party changes of district councils during the legislative period are listed.

The presidents of the Middle Franconia District Assembly and its predecessor institutions were:

In 1981, the Middle Franconia district was the first region in Bavaria to enter into a partnership with the Haute-Vienne department in France; In the following years, corresponding agreements followed with the two neighboring departments of Creuse and Corrèze . In 1995 this resulted in a partnership between the (entire) region of Limousin and the district of Middle Franconia.

The Region Mittelfranken is territorially identical to the district of Central francs. He is the area of ​​responsibility of the state middle authority government of Middle Franconia . Since January 1, 2008, Thomas Bauer has been the head of the authorities (district president); Government Vice President is Eugen Ehmann.