This article describes the Bavarian administrative district. For the asteroid of the same name see (6293) Oberpfalz .

From 1939 to 1945, Lower Bavaria-Upper Palatinate also included areas that had been separated from Czechoslovakia after the Munich Agreement of 1938 with the Sudetenland . It was the three districts:

In addition, in 1940/45 11 communities from the former Czechoslovak state were allocated to the Waldmünchen district.

Before the district reform on July 1, 1972, the administrative district of Upper Palatinate had five independent cities and nineteen districts.

The statistics reflect steady growth; but that should not be overstated. There were sometimes serious differences locally. The city and district of Regensburg are currently growing dynamically, while in the north of the Upper Palatinate the population has been declining for 20 years. The proportion of foreigners is currently (2018) at 8.75% and thus well below the Bavarian average (13.20%). A death surplus of 2,960 people contrasted with an increase in migration of 12,138 people in 2015. In 2017, the death surplus was 1,963 people out of 9,982 births. Only the city of Regensburg showed positive natural population growth (2017) (+201 people).

The entire Upper Palatinate, with the exception of the Franconian language enclave Neustadt am Kulm , belongs to the Bavarian language area .

Northern Bavarian is spoken in the north and in the middle of the Upper Palatinate, in the south of the Upper Palatinate, from Waldmünchen and Burglengenfeld , a broad linguistic mix between Northern and Central Bavarian begins. In the Cham basin the dialects tend towards Lower Bavarian and in the Regensburg area they tend towards Upper Bavaria. There is a clear difference between speakers from Regensburg and Straubing, although Straubing still belongs to this mixed zone.

Northern Bavarian is an original variant of Bavarian, which still retains many archaisms that have already died out in the central Middle Bavarian language area. It has many phonetic peculiarities, some of which it shares with the neighboring East Franconian dialects . Northern Bavarian is particularly characterized by the "fallen diphthongs" (preceded by mhd. Uo, ië and üe ) and the diphthonged Middle High German long vowels â, ô, ê and œ ; For example, the standard German words brother, letter and tired ( monophthonged vowels) correspond here to Brouda, Brejf and mejd (first monophthonged, then again diphthonged ) instead of Bruada, Briaf and miad (preserved diphthongs) as in Middle Bavarian south of the Danube. Furthermore, for example, the German standard corresponds sheep here Schòuf (mittelbair. Schoof ), red here Rout / rout (mittelbair. Red / rout ), snow here Schnèj (mittelbair. Snow ), or angry here Bey (mittelbair. Bees ).

In the dialects in the west and north-west of the northern Bavarian language area, a characteristic elevation of the vowels e (and ö after rounding) and o to i and u is recorded, for example Vuugl and Viigl, in contrast to the more southern forms Voogl and Veegl for standard language Bird and birds. This elevation is also considered a characteristic (East) Franconian feature. In the northeast of the language area these sounds are the diphthongs , among others , and in general, so Vuagl and Viagl .

The plural forms of diminutive and pet forms usually end in - (a) la, in the singular with - (a) l, for example Moidl = girls, d 'Moi (d) la = girls. The ending -en after k, ch and f has been retained as a consonant in the northern northern Bavarian dialects, for example hockn, stechn, hoffn, Soifn (= soap ). In the more southern northern Bavarian dialects, as in the central Bavarian dialects further south, it has become -a , i.e. hocka, stecha, hoffa, Soifa. The form niad for Middle Bavarian net and the various forms of the personal pronoun for the 2nd person plural are also characteristic: enk, enks, ees, èts, deets, diits, diats, etc.

Largest cities in the Upper Palatinate

The Upper Palatinate is a landscape with low mountain ranges and in the flatter regions with numerous ponds and lakes . Compared to other regions in Germany, it has a more rural character, is less populated and borders (clockwise from the north) on Upper Franconia , the Czech Republic , Lower Bavaria , Upper Bavaria and Central Franconia .

The Upper Palatinate is a volcanic area that was active in the Tertiary with around 150 volcanoes. Together with the Czech West Bohemia , a more recent volcanic activity took place in the Pleistocene on the Eisenbühl , the Kammerbühl and the Neualbenreuther Maar .

From 1806 to 1808 the Kingdom of Bavaria was divided into 15 districts, the names of which were based on rivers. The Regenkreis initially comprised 13 regional courts and, since 1809, the district-direct city of Straubing. In 1810 it was enlarged considerably, including by the Principality of Regensburg . Thereafter Regensburg became the seat of the General District Commissioner. The Regenkreis also gave areas to the Unterdonaukreis .

The administrative district of Upper Palatinate is crossed by the following railway lines :

In addition, there are a number of sub-routes such as B. the railway line Regensburg – Ingolstadt

The following highways run across the Upper Palatinate region:

The economy as a whole is characterized by small and medium-sized companies, some of which are among the leaders in their industry. Well is tourism a major economic factor. Agriculture and pond management, which occur mainly in the northern regions of the Upper Palatinate, play a rather small role in macroeconomic terms. Industrial structures are most strongly represented in the greater Regensburg area , which has developed considerable economic dynamism over the past 25 years. In addition to BMW, Krones AG , Infineon and Continental, a number of other companies produce in and around Regensburg. After Munich, Regensburg is the second strongest biotechnology location in Bavaria (5th place nationwide).

At the district level, the Schwandorf district in the Upper Palatinate comes first in terms of tax revenue. There are 300 industrial companies with around 16,000 jobs. The most well-known companies include MEILLERGHP GmbH, Benteler Automobiltechnik GmbH and Nabaltec AG in Schwandorf, Innovationspark Wackersdorf (BMW), Läpple AG with a plant in Teublitz , F.EE GmbH in Neunburg vW and Heidelberg Cement AG in Burglengenfeld .

The intensive mining in the Upper Palatinate caused a strong economic upswing and made the region a center for iron ore extraction and smelting in Europe. Even later, until the 1980s, the region's ore deposits were economically exploited. Until around 1990 and 2002, the iron and steel industry ( Maxhütte with the locations Sulzbach-Rosenberg and Maxhütte-Haidhof ; the Luitpoldhütte in Amberg is a remaining heavy industry ) in connection with significant deposits of iron ore (in Auerbach in the Upper Palatinate ) and lignite (in Wackersdorf ) a decisive economic factor.

Due to its peripheral location on the Iron Curtain , the Upper Palatinate has been a focus of the US Army and the newly founded Bundeswehr since the 1950s . Since then, the military presence has been an important economic factor in the structurally weak area, even if the end of the Cold War resulted in a significant reduction in troops since the early 1990s.

The market town of Plößberg is characterized by the high density of industrial branches. These include the companies Ziegler Holzindustries KG, Erdenwerk Gregor Ziegler, Kartonagenwerk Liebenstein and Horn Glas Industries AG. The company Ziegler Holzindustries KG, the Erdenwerk Ziegler and the company Horn Glas Industries AG were honored from 2004 to 2010 by the Bavarian Minister of State Otto Wiesheu and Martin Zeil as one of Bavaria's best 50 companies.

Naab near Schwandorf with Fronberg Castle

Castle ruins in Flossenbürg in the district of Neustadt / Waldnaab

Wörth Castle on the Danube

Personalities from the Upper Palatinate

Ruprecht III. and his wife Elisabeth von Hohenzollern-Nürnberg in a miniature copy of a now-lost mural in Heidelberg Castle (Bavarian National Museum Munich, Inv. No. NN 3610). 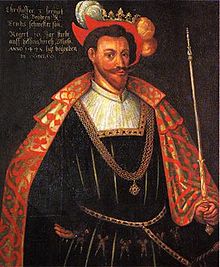 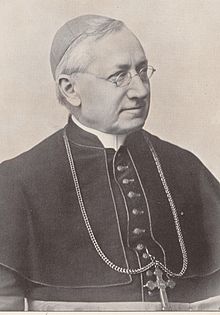 The Kingdom of Bavaria was still to Prussia divided into circles its territory 1806th From 1828 to 1919 the Upper Palatinate ( Regenkreis until 1837) was represented by a district administrator (h), from 1919 to 1945 the corresponding term was district council (from 1932 amalgamation with Niederbayern as the district council of Lower Bavaria and the Upper Palatinate ). During the Nazi era, however, the designation "district" was adjusted to the Prussian designation "district" and in 1939 the "district offices" were renamed uniformly throughout the empire to "districts", which the constitution of the Free State of Bavaria ignored shortly after the Second World War. The local parliaments, called district days despite the provisions in the constitution, were re-elected in 1954 for the first time after the Second World War .

Franz Löffler ( CSU ) has been president of the district assembly since 2008 . His deputies are Lothar Höher (CSU) and Thomas Thumann (Free Voters).

Government of the Upper Palatinate

Government of the Upper Palatinate .