The title of this article is ambiguous. Further meanings are listed under Naab (disambiguation) .

The Naab is a left tributary of the Danube in the Upper Palatinate in Eastern Bavaria , Germany, flowing in a southerly direction .

It arises from the confluence of the Haidenaab, coming from the northwest, and the more water-rich Waldnaab, flowing from the north . With this left source river over 99 kilometers long, the Naab is about 197 km long. From its 5514 km² catchment area , it supplies the Danube with 50.3 m³ / s of water, making it the largest left Danube tributary above Vienna . 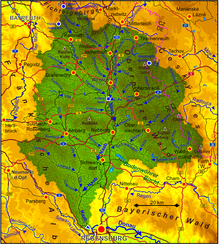 Catchment area of ​​the Naab

The Naab arises west of the Upper Palatinate Forest around nine kilometers as the crow flies south of Weiden near Unterwildenau from the union of Haidenaab (around 6.5 m³ / s; from right) and Waldnaab (around 10.4 m³ / s; from left). Then it runs southwards along the A 93 and the B 15 , later the B 8 , including via Schwandorf and Burglengenfeld . It flows into the Danube at Mariaort near Regensburg from the left , just below the Schwarzen Laber and around five kilometers as the crow flies west of the confluence of the Regen into the Danube.

Until 1304, the Naab in the Regensburg area flowed east of the Danube arc for a few kilometers on the left for several kilometers parallel to the Danube, merged south of Stadtamhof with the rain running from north to south and then a little further southeast with the Danube. A contiguous, narrow headland ran between Naab and Danube , of which the two Danube islands Oberer Wöhrd and Unterer Wöhrd still exist today after two breakthroughs in the urban area of ​​Regensburg .

After the second breakthrough as a result of a huge flood catastrophe in 1304, the mouth of the Naab shifted several kilometers to the west to where it currently flows into the Danube, southwest of the Danube arch near Mariaort. Thus the last piece of the original Naab river bed in the urban area of ​​Regensburg became today's second, northern arm of the Danube. Both arms of the Danube were separated by a few islands, which were redesigned several times over the centuries, so that there are only two of them today - the Upper Wöhrd in the west and the Lower Wöhrd in the east.

The northern branch of the Danube, which was created after the breakthroughs, i.e. the former river bed of the Naab, initially carried more water than the southern branch of the Danube. This endangered the use of the ship landing sites in the city of Regensburg on the southern branch of the Danube. Because unhindered shipping and the monetary income from land and customs rights were vital for the city, hydraulic engineering measures at the westernmost tip of the Upper Wöhrd near Pfaffenstein at the so-called weir hole changed the flow conditions so that the southern arm of the Danube was supplied with more water than the northern one, which led past the landing sites created later by the Duke of Bavaria. The defensive hole became a bone of contention between the imperial city of Regensburg and the Duchy of Bavaria. Both tried again and again to dig water from each other through hydraulic engineering.

Source rivers and tributaries of the same name of the Naab

The largest tributaries in the sequence of their mouths into the Naab with inflow direction, mouth discharge, length and catchment area:

Cities, market communities and municipalities through which the Naab flows or is touched, in the order of the first contact from the confluence of the Wald- and Haidenaab:

The river or the Naabtal has become known since 1988 through the Original Naabtal Duo and their hit Patrona Bavariae .