The title of this article is ambiguous. For a straight line when designing printed circuit boards, see PCB unbundling .

The church towers are about 17.5 km as the crow flies and separated by a state border: in the
front right the Catholic Church of St. James in Schutterwald (Germany), in the back left the minster in Strasbourg (France)

As the crow flies , one describes the shortest distance between two points in the landscape by direct air if the two points are in line of sight. In this case, the beeline is a distance (which may also overcome major differences in altitude in the terrain, for example in the mountains). Is the line of sight through an obstacle, e.g. If, for example, a building or a mountain is interrupted, the straight line corresponds to the distance between the two points if the obstacle were not there. 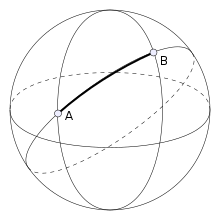 The shortest path on the earth's surface between point A and B is an orthodrome.

At greater distances, the beeline does not take into account the contour of the terrain - that is, elevations, valleys and differences in height - but does include the spherical shape of the earth. In this case the beeline runs “horizontally” and follows the curvature of the earth; From a mathematical point of view, the beeline here corresponds to an arc of a circle that lies on a great circle around the center of the earth (compare spherical trigonometry ). When such routes are projected onto flat maps, there are generally no longer any straight lines , but curves that still represent the shortest distance between two points. For example, the straight line between New York and Berlin runs through Scotland. In geometry and navigation , one speaks more precisely of the orthodrome instead of a straight line.

When sailing, preference is given to the Loxodrome instead of the Orthodrome: the Loxodrome is characterized by the fact that the bearing angle to the target does not change.

A map projection in which great circles (and thus the air lines between two points) are always depicted as straight lines is the gnomonic projection .

Calculation for the globe

The earth can be viewed as a sphere to a good approximation. To simplify matters, the radius of the sphere can be assumed to be one. The Cartesian coordinates are calculated from the latitude and longitude of a point - with the -axis in the direction of the earth's axis - with the help of the trigonometric functions sine and cosine :

Another point on the globe has the same coordinates

First of all, the Euclidean distance between the two points in three-dimensional space can be calculated with the Pythagorean theorem (this is not the straight line, but the length of the distance that leads through the globe):

The opening angle can now be calculated from the distance and the radius of the earth :

Alternatively, the opening angle can be calculated with the scalar product:

, that simplifies the equation.

Alternatively, the opening angle can also be calculated directly from the geographic coordinates:

The straight line you are looking for is the length of the arc and the opening angle in radians multiplied by the radius of the earth:

In the same way, the apparent distance in radians between two stars with a given declination and right ascension can be calculated.