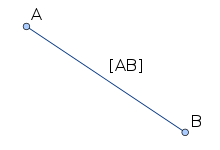 Distance [AB] between the two points A and B

Historical illustration of the construction of routes (1699)

A segment is a straight line in the Euclidean plane or in Euclidean space that is bounded by two points . If and are two given points in the plane or in space, then the distance between these two points is called the connecting distance from and and is denoted by.

Lines can also be defined with the help of the intermediate relation ("... lies between ... and ..."): the line then consists of all points of the connecting straight lines that lie between points and . Depending on whether the points and are included or not, a distinction is made between the following cases:

If the order of the points and an orientation of the route are given, one speaks of a directed route (also arrow or bound vector ) .

A route is called:

Here and are two real parameters which, however , cannot be selected independently of one another due to the condition . The open route consists of the points with the parameters , while the semi-open routes and are represented by the parameter areas and .

When specifying a closed or open route, the order of the end points is irrelevant, so it applies

The length of the route is the distance between its two end points. This route length is often referred to as , sometimes also as, or . The line connecting two points and can thus be characterized as a set of those points for which the sum of the distances

is minimal. Since an ellipse is characterized by the fact that the sum of the distances to two given points (the focal points of the ellipse) is constant, a line segment is thus a special (degenerate) ellipse. A route can also be viewed as a special curve . Of all the curves connecting two given points, the line connecting these points has the shortest arc length .

If a vector space is over the real or complex numbers , then a subset is called a (closed) segment if it goes through

can be parameterized. Here, with two vectors , the endpoint of the segment represent. Alternatively, a closed path can also be created using the convex combination

are represented as a convex hull of their endpoints. In both representations, open and semi-open routes are also described by restricting the parameter range accordingly.

Essential characteristics of the Euclidean geometry concept of a segment can be formulated in a very general framework that allows this concept to be represented in abstract incidence geometries completely independently of topological or metric considerations. This was u. a. shown by Ernst Kunz in his textbook level geometry . An incidence geometry is used as a basis, which consists of a set of points and a set of straight lines and which satisfies the following conditions:

The two conditions (A1) and (A2) mean that the incidence geometry fulfills the connection axiom, while (A3) and (A4) ensure that it meets certain richness requirements.

Kunz briefly calls an incidence geometry which fulfills these four conditions a plane .

On a level understood in this sense, the concept of a route can be grasped by the following route axioms:

(B0) A subset is assigned to every two (not necessary) different points , which is called the distance from to .

The condition (B6) is called Pasch's axiom by Kunz according to the conditions in the Euclidean plane . There it clearly states that a straight line which “penetrates” a triangle must also leave it somewhere. The name of the axiom refers to the mathematician Moritz Pasch (1843–1930), who was the first to recognize that, within the framework of an axiomatic foundation of Euclidean geometry, the facts presented in the axiom cannot be inferred from the other axioms, but specifically required must become.

As can be shown, the system of line axioms is equivalent to that of Hilbert's arrangement axioms - assuming the incidence axioms . The connection to the intermediate relation results from the following definition:

If three points are different in pairs , then the point lies between the points and , if this applies.

If the mentioned condition is fulfilled for three pairs of different points , one also says:

The point is the inner point of the route .