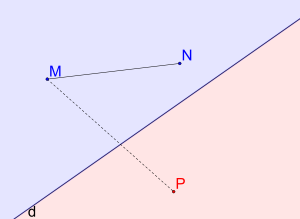 A straight line d and the two half-planes determined by it. M and N are on the same side of d while M and P are on different sides.

In the elementary geometry of the plane of the drawing, each straight line divides the plane into two (open) half-planes , the sides of the straight line; this observation is initially taken from the point of view. This division of the sides can be described mathematically as an equivalence relation on the set of all points of the plane that do not lie on the dividing straight line.

In analytical geometry this can be specified and generalized: In a - dimensional affine space above an ordered body , every hyperplane , i.e. every - dimensional subspace, provides a side division of the total space into two half spaces.

In synthetic geometry , all page divisions that are determined by straight lines of an affine plane can be introduced by axiomatic description of a page division function with which the plane becomes a weakly arranged plane . Such a page division function then makes it possible to introduce a weak interrelationship at this level , which through an additional axiom becomes an interrelationship in the sense of Hilbert's system of axioms of Euclidean geometry . Levels with a "strong" interrelationship that satisfies Hilbert's axioms of arrangement are called arranged levels . Weak side division functions exist for desargue affine planes if and only if the oblique coordinate of the plane allows a nontrivial quadratic character and can be clearly described by such a character. Each arrangement of a Desargue plane corresponds uniquely to an arrangement of its coordinate oblique body.

This article mainly describes the division of pages in an affine plane in terms of synthetic geometry. The concept of page division from analytical geometry, which is a special case of the synthetic concept for levels, is put in front as the main idea.

A three-dimensional space is used as a basis for a clear presentation. The page division can be carried out in the same way in every finite-dimensional space with a hyperplane instead of the plane. Let be an ordered body and the three-dimensional affine space with the coordinates vector space . Each plane can be described by an inhomogeneous coordinate equation. The sign of the affine function provides the division of the sides. If this function returns values ​​greater than 0 for the position vectors of two points, then they lie on the same side of the (hyper) plane described by, also if both values ​​are less than 0. If one of the values ​​is less and one is greater than 0, then the points are on different sides.

Although the point coordinates and the (hyper) plane equation depend on the selected coordinate system, the page division does not change when the coordinate system is changed. It depends solely on the order of the ordered body and even determines it unambiguously.

Let be an affine incidence plane , the set of its lines and the set of triples

then a mapping into the cyclic group is called a (weak) division function if the following axioms are fulfilled:

An affine incidence plane with a division function is called weakly arranged .

Relationship between the definitions

On the concept of the half-plane and half-line. The half-plane Y described in the text is not marked here: It consists of all points of the straight line t (green) and the points "to the right" of t .

The terms given below are defined in Degen's textbook. Deviating from this, there are different conventions in the literature about whether a half-plane without attributes should be "open" or "closed", i.e. whether it contains its "edge line", as well as about whether a "half line" contains its starting point.

The terms defined here are based on topological terms (“interior”, “edge”). If one takes the set of all sides (the "interior" for all half-planes) as a sub- basis, then a topology is actually defined on the plane. If the plane contains an infinite number of points, which is always the case for an affine plane over an ordered body, then the defined terms also apply in the topological sense. In a finite level, however, a trivial one arises, namely the discrete topology .

For each page division function on an affine plane, there is a clearly determined mapping on the set of collinear point triples of the plane

One then says " lies between and " when and is and calls this three-digit relation a weak interrelationship . This relation fulfills the following axioms (→ compare axioms of arrangement (group II) in Hilbert's system of axioms):

(A2) If and are different points, there is a point lying between them.

(Z) If there are three non-collinear points and intermediate points of the three connecting lines of this triangle, then they are also non-collinear.

The axiom (Z) can also be formulated as a supplement to (A4), the axiom of Pasch: "... then also contains a point between and or one between and , never both !" - The "or" in the axiom (A4 ) thus becomes the exclusive or through (Z) .

A Desargue plane is isomorphic to a coordinate plane over an inclined body . For three collinear points with there is always exactly one element , the stretching factor with , and vice versa for each there is a collinear point triple with (→ see Affine translation plane ). Because both the stretching factor and the intermediate function are invariant under parallel projections, a well-defined assignment can be made

which is a nontrivial quadratic character of .

Conversely, any nontrivial quadratic character of the oblique body can be used to define a weak intermediate function:

The arrangement of a sloping body must fulfill the same axioms as the order of an ordered body, from which it follows that it is uniquely determined by a positive area that has the following properties (→ compare ordered bodies ):

A quadratic character is determined by each such positive area , which is positive, negative and fulfills. Conversely, every square character defines an area , which, however, generally only has the 2nd and 3rd properties of a positive area.