Affine Fano axiom: In the parallelogram , the diagonals and intersect at a point . The axiom makes it possible to assign midpoints to a segment.

An affine plane fulfills the Fano axiom if it applies there (see the figure on the right):

In more detail and more formally, the axiom reads as follows: If there are points of the affine plane , none of which are on a straight line, then the following applies: Out and follows .

For an affine translation plane , the following statements are both equivalent to the Fano axiom:

For any affine plane the first of these statements follows from the Fano axiom.

For each affine translation plane the alternative applies:

Midpoints of a route

In an affine plane that satisfies the Fano axiom, one can assign midpoints to a segment:

A collineation on an affine Fano plane is called point reflection if there is a point that is a center point for every connecting line . 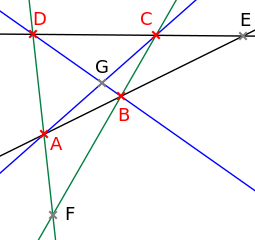 A complete square. The four “corners” A, B, C, D are marked in red, pairs of opposing sides are each the same color. The intersections of the opposite sides, E, F, G - the "diagonal points" - are gray.

A complete quadrilateral in a projective plane consists of 4 points (the corners of the quadrilateral) in a general position, i.e. no three of them lie on a common straight line. The 6 straight lines connecting the corners are called the "sides" of the square, two sides that do not go through a common corner are called the "opposite sides" of the square.

A complete square is called an "anti-Fano square" if the points of intersection of the opposing sides lie on a straight line, otherwise it is called a "Fano square".

→ A complete square, understood as an ordered set of four points, forms a projective point base .

"The points of intersection of the opposite sides (diagonal points) in any complete quadrilateral are not collinear ."

Relations of the projective to the affine Fano axiom

A complete quadrilateral in a projective plane consists of 4 straight lines (the sides of the quadrilateral) in a general position, i.e. no three of them pass through a common point. The 6 intersection points of the sides are called the “corners” of the four-sided, every two corners that are not on one side are called the “opposite corners” of the four-sided.

The dual form of the projective Fano axiom is:

"The straight lines connecting the opposite corners (diagonals) in any complete quadrilateral are not copunctal ."

The following applies: For every Fano level, its dual level is also a Fano level.

This means that for each projective plane the Fano axiom and the dual Fano axiom are equivalent.

Projective planes with Fano and Antifano quadrangles and Desargues' theorem

The following theorem by Gleason says that a finite anti-Fano plane (in American parlance, unfortunately, here by Andrew Gleason , for example , often referred to as a fano plane ...) is always desarguean and therefore one over a finite field :

From the collinearity of the diagonal points of all complete quadrilaterals in a finite projective plane follows the general validity of Desargues theorem in this plane.

Examples of real, finite half-bodies of even order, i.e. quasi-bodies that satisfy both distributive laws but are not alternative fields, were given by Donald Ervin Knuth in his dissertation. For this reference, see the article Half-Body (Geometry) . There, two such half-bodies of order 16 are specifically specified in the Examples section .

The projective levels above all these "Knuthschen" real half-bodies belong to the Lenz-Barlotti class V. According to Gleason's theorem, they can not fulfill the anti-Fano axiom because they are non-desarguic. On the other hand , they contain the Fano plane as a substructure (the prime body with 2 elements is contained in the core of the half body as a partial body) and thus also anti-Fano quadrangles.

The planes constructed by Pickert for proof can be coordinated by real quasi-bodies of order . That means: You and Knuth's planes mentioned above can be slotted in such a way that an affine translation plane of order q arises. In this affine plane either

Pickert replaces the finiteness requirement of Gleason's theorem with a transitivity requirement. See the definitions and language rules that are explained in the article Classification of projective planes . He thus proves: "If there are three non-collinear points in a projective plane , so that the plane - and - is transitive, and if the diagonal points in this plane in every complete quadrilateral are collinear, then the plane is desargue."