Vector addition and multiplication with scalars : A vector v (blue) is added to another vector w (red, bottom). Above, w is stretched by a factor of 2, the result is the sum v + 2 · w.

A vector space or linear space is an algebraic structure that is used in many branches of mathematics . Vector spaces are the central subject of investigation in linear algebra . The elements of a vector space are called vectors. They can be added or multiplied by scalars (numbers), the result is again a vector of the same vector space. The term arose when these properties were abstracted based on vectors of Euclidean space so that they can then be transferred to more abstract objects such as functions or matrices .

A basis of a vector space is a set of vectors that allow each vector to be represented by unique coordinates . The number of basis vectors in a basis is called the dimension of the vector space. It is independent of the choice of basis and can also be infinite. The structural properties of a vector space are uniquely determined by the body over which it is defined and its dimensions.

A base makes it possible to perform calculations with vectors using their coordinates instead of the vectors themselves, which makes some applications easier.

V2: existence of a neutral element with

V3: Existence of an element that is too inverse with

S4: neutrality of the single element , that is

The following statements apply to all and :

A clear vector space is the two-dimensional Euclidean plane (in right-angled Cartesian coordinate systems ) with the arrow classes (displacements or translations) as vectors and the real numbers as scalars.

is the shift by 2 units to the right and 3 units up,

the shift 3 units to the right and 5 units down.

The zero vector corresponds to the displacement that leaves all points in place, i.e. H. the identical figure.

By stretching the shift with a scalar from the set of real numbers, we get three times the shift:

Everything that has been said about this example also applies to the real affine plane .

If a field and a natural number, then the -fold is the Cartesian product

the set of all - tuples with entries in , a vector space over . The addition and the scalar multiplication are defined component-wise; for , one sets: 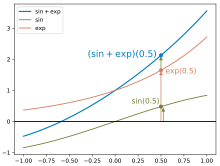 Example of addition for functions: The sum of the sine function and the exponential function is with

If a field, a vector space and an arbitrary set, an addition and a scalar multiplication can be defined point by point on the set of all functions : For and the functions and are defined by

With this addition and scalar multiplication there is a vector space. This applies in particular to when the body itself is chosen as the target area . Further examples of vector spaces are obtained as sub-vector spaces of these function spaces .

A simple example of a function space is the two-dimensional space of real linear functions , that is, the functions of form

For example, the sum of the two linear functions is and with

a 5-dimensional vector space with the base .

If an upper part of the body is , then with its addition and the restricted multiplication as scalar multiplication is a -vector space. The rules to be demonstrated for this result directly from the body axioms for . This observation plays an important role in body theory .

are fulfilled. That is, it is compatible with the structures that constitute the vector space: addition and scalar multiplication. Two vector spaces are called isomorphic , if there is a linear mapping between them that bijektiv is thus a reversal function has. This inverse function is then automatically linear as well. Isomorphic vector spaces do not differ in terms of their structure as a vector space.

Basis of a vector space

For a finite number and one denotes the sum

as a linear combination of the vectors . Thereby itself is again a vector from the vector space .

If a subset of , then the set of all linear combinations of vectors from is called the linear envelope of . It is a subspace of , namely the smallest subspace that contains.

A subset of a vector space is said to be linearly dependent if the zero vector can be expressed in a non-trivial way as a linear combination of vectors . “Non-trivial” means that at least one scalar (a coefficient of linear combination) is different from zero. Otherwise it is called linearly independent .

A subset of a vector space is a basis of if is linearly independent and the linear hull of is the whole vector space.

Given the axiom of choice , Zorn's lemma can be used to prove that every vector space has a basis (it is free ), whereby this statement in the context of Zermelo Fraenkel is equivalent to the axiom of choice. This has far-reaching consequences for the structure of every vector space: First of all, it can be shown that every two bases of a vector space have the same cardinality , so that the cardinality of any base of a vector space is a unique cardinal number , which is called the dimension of the vector space. Two vector spaces over the same body are isomorphic if and only if they have the same dimension, because due to the equality of two bases of two vector spaces there is a bijection between them. This can be continued into a bijective linear mapping, i.e. an isomorphism of the two vector spaces. It can also be shown that any linear mappings are determined by the images of elements of a base. This enables any linear mappings between finite-dimensional vector spaces to be represented as a matrix. This can be transferred to infinite-dimensional vector spaces, but it must be ensured that each generalized “column” only contains a finite number of non-zero entries, so that each basis vector is mapped onto a linear combination of basis vectors in the target space.

The linear factors of the representation of a vector in the basis vectors are called coordinates of the vector with respect to the basis and are elements of the underlying body. Only when a basis is introduced are each vector assigned its coordinates with respect to the selected basis. This makes computing easier, especially if you can use their assigned "descriptive" coordinate vectors instead of vectors in "abstract" vector spaces.

Two or more vector spaces can be linked to one another in different ways, so that a new vector space is created.

The direct sum of two vector spaces over the same body consists of all ordered pairs of vectors, of which the first component comes from the first space and the second component from the second space:

The vector addition and the scalar multiplication are then defined component-wise on this set of pairs, which in turn creates a vector space. The dimension of is then equal to the sum of the dimensions of and . The elements of are often written as a sum instead of a pair . The direct sum can also be generalized to the sum of finitely many and even infinitely many vector spaces, in which case only finitely many components may be not equal to the zero vector in the latter case.

The direct product of two vector spaces over the same body consists, like the direct sum, of all ordered pairs of vectors of the form

written down. The elements of the tensor product space have the bilinear representation

where are scalars, is a basis of , and is a basis of . If or is infinite dimensional, again only a finite number of summands may not be zero. The dimension of is then equal to the product of the dimensions of and . The tensor product can also be generalized to several vector spaces.

In many areas of application in mathematics, such as geometry or analysis , the structure of a vector space is not sufficient, for example vector spaces per se do not allow limit value processes , and one therefore considers vector spaces with certain additionally defined structures that are compatible with the vector space structure in certain senses are. Examples: