The coordinate system in two-dimensional space 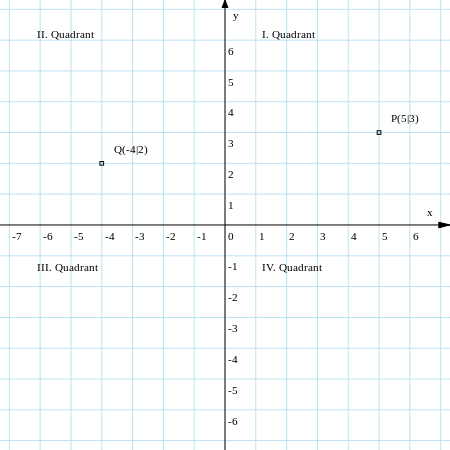 The two directional axes are orthogonal to one another, i.e. they intersect at a 90 ° angle. The coordinate lines are straight lines at a constant distance from one another. Assuming mathematical right-handedness , the horizontal axis is called the abscissa axis (from Latin linea abscissa "cut line ") or the right axis. The vertical axis is called the ordinate axis (from Latin linea ordinata, "ordered line") or vertical axis.

The variables and are often used in mathematics to denote the coordinates, for example when straight lines or curves are described by equations. One then speaks of the -axis instead of the abscissa axis and the -axis instead of the ordinate axis. The or value of a point is called the abscissa or ordinate. Sometimes the coordinate axes are also called the abscissa or ordinate for short (see also -axis and -axis or dependent and independent variables ).

As a donkey bridge , you can remember that the terms in front and in the back in the alphabet always belong together: the abscissa and ordinate. Another mnemonic: The O rdinatenachse shows (for positive values) to o ben - the x-axis must also (with positive show values) to the right.

The point where the two axes meet is called the coordinate origin or origo (Latin for "origin").

For a point with the coordinates and one writes or also .

Left-handed coordinate systems are also commonly used in computer graphics . Most 2D systems use the upper left corner as (0,0).

In three-dimensional space there is also a third axis, the spatial axis ( axis, not shown here), called Applikate (in geography : Kote ). Most of the time the - and -axis lie in the plane, and the -axis is used to display the height. The eight parts of space formed by the coordinate planes are called octants . Graphically, points here result in a point cloud .

In the generalization, mathematics provides for higher-dimensional spaces (see: 4D ). For example, the axis for the expansion in the fourth spatial dimension is sometimes referred to as the -axis, the directions of expansion as ana ("above") and kata ("below").

In physics, the right axis is often used to represent time as an independent variable; of it is then spoken of as the time or axis , while the vertical axis represents the time-variable variable, e.g. B. the distance covered or the speed , represented and accordingly referred to as - or - axis.

Three-dimensional coordinate systems allow, for example, the representation of two-dimensional statistical distributions in which the height axis indicates the probability or density function.

One of the most frequent applications of 3-axis coordinate systems is likely to be the application for spatial detection and description, e.g. B. in construction, surveying and navigation. In navigation , for example, they are used to localize an object using GPS . This is followed by the description of the spatial orientation of objects using angles, which is often implemented with the help of roll, pitch and yaw angles ( RPY angles ). Earth-related coordinate systems are often considered to be approximately Cartesian, since they are actually spherical coordinate systems. In most cases, the use delivers very useful values ​​for the application with relatively short distances - the deviations from the approximation are typically several orders of magnitude smaller than the measurement accuracy required for the application or achievable in practice based on other factors.

In Definition 4 of the Konika, Apollonios writes of parallels that are "drawn in an orderly manner" to the diameter of a conic section. The Greek term for “ordered”, tetagmenos , is rendered in Latin as ordinatim . That is the origin of the word ordinate .

The first known use of the words abscissa and ordinate can be found in a letter from Gottfried Wilhelm Leibniz to Henry Oldenburg on August 27, 1676.