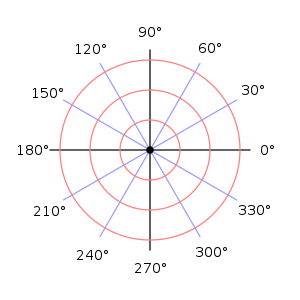 A polar grid of different angles with degrees

Polar coordinates are a special case of orthogonal curvilinear coordinates . They are useful when the relationship between two points is easier to describe in terms of angles and distances than would be the case with - and - coordinates. In geodesy, polar coordinates are the most common method for measuring points ( polar method ). In radio navigation , the principle is often referred to as " Rho-Theta " (for distance and direction measurement).

The terms angle and radius were already used by the ancients in the first millennium BC. The Greek astronomer Hipparchus (190-120 BC) created a table of trigonometric chord functions to find the length of the chord for each angle. With the help of this basis it was possible for him to use the polar coordinates in order to be able to determine the position of certain stars. However, his work only covered part of the coordinate system.

In his treatise On Spirals , Archimedes describes a spiral line with a function whose radius changes depending on its angle. However, the work of the Greek did not yet encompass a full coordinate system.

There are various descriptions for defining the polar coordinate system as part of a formal coordinate system. The entire history on this topic is summarized and explained in the book Origin of Polar Coordinates by Harvard Professor Julian Coolidge. Accordingly, Grégoire de Saint-Vincent and Bonaventura Cavalieri introduced this concept independently of each other in the middle of the 17th century. Saint-Vincent wrote on the subject on a private basis in 1625 and published his work in 1647, while Cavalieri published his draft in 1635, with a corrected version appearing in 1653. Cavalieri initially used polar coordinates to solve a problem related to the area of ​​the Archimedean spiral . A little later, Blaise Pascal used polar coordinates to calculate the length of parabolic angles.

In the Method of Fluxions (written 1671, published 1736) Sir Isaac Newton considers the transformation between polar coordinates to which he refers to as “Seventh Manner; For Spirals, ”(Seventh Method; For Spirals), and nine other coordinate systems.

It was followed by Jacob Bernoulli , who in the journal Acta Eruditorum (1691) used a system that consisted of a straight line and a point on this straight line, which he called the polar axis or pole . The coordinates were defined therein by the distance from the pole and the angle to the polar axis. Bernoulli's work extended to the formulation of the curvature circle of curves, which he expressed by the coordinates mentioned.

The term polar coordinates in use today was finally introduced by Gregorio Fontana and used in Italian scripts of the 18th century. George Peacock subsequently adopted this name in English in 1816 when he translated the work of Sylvestre Lacroix Differential and Integral Calculus into his language.

Alexis-Claude Clairaut, on the other hand, was the first to think about polar coordinates in three dimensions, but it was only the Swiss mathematician Leonhard Euler who succeeded in developing them .

The polar coordinate system is clearly defined in that an excellent point, also called a pole, forms the origin / zero point of the coordinate system. Furthermore, a ray emanating from it is marked as a so-called polar axis. Ultimately, one direction (of two possible) that is perpendicular to this polar axis must be defined as positive in order to determine the direction of rotation / the direction of rotation / the orientation. Now an angle, the polar angle, can be defined between any ray that passes through the pole and this particular polar axis. It is only unambiguous up to a whole number of revolutions around the pole, regardless of what is chosen as the angle measure for it. Any, but fixed, scaling is also carried out on the polar axis itself in order to define the radial unit length. Now a point of the plane can be clearly assigned to each pair , the first component being viewed as the radial length and the second as the polar angle. Such a pair of numbers is called the (not necessarily unique) polar coordinates of a point in this plane.

The coordinate , a length, is referred to as the radius (in practice also as a distance) and the coordinate as the (polar) angle or, in practice (occasionally) also as the azimuth .

In mathematics, the counterclockwise angle is usually defined as positive when looking vertically from above onto the plane (clock) . So goes the direction of rotation of the right to above (and further to the left ). The preferred angle unit is the radian , because it is then the most elegant to handle analytically. The polar axis typically points to the right in graphic representations of the coordinate system .

The conversion of Cartesian coordinates into polar coordinates is somewhat more difficult because, from a mathematical point of view, one is always dependent on a trigonometric inverse function (which does not cover the entire value range of the full angle) . First, however, the radius to the Pythagorean theorem simply be calculated as follows:

When determining the angle , two special features of the polar coordinates must be taken into account:

Any of the equations can be used to calculate

to be used. However, the angle is not clearly determined by this, not even in the interval or , because none of the three functions , and is injective in these intervals . The last equation is also not defined for. A distinction between cases is therefore necessary, which depends on the quadrant in which the point is located, i.e. on the signs of and .

With the help of the arctangent , the interval or can be determined as follows :

Some programming languages (so first Fortran 77 ) and application programs (such as Microsoft Excel ) offer an arctangent function with two arguments , which takes the presented case distinctions internally and calculates it for any values ​​of and .

With the help of the arccosine , only two case distinctions can be made:

By taking advantage of the fact that a center angle in a circle is always twice as large as the associated circumferential angle , the argument can also be calculated with the help of the arctangent function with fewer case distinctions:

By modifying the first formula above, the following can be determined directly in the interval :

In this case too, the arccosine formula makes do with only two case distinctions:

In geodetic or other calculations, azimuths with values ​​outside the usual interval with the lower limit (or also ) can result. the equation

shifts to the desired interval, so that . Here, the rounding off to the nearest integer floor function , ie for every real is the largest integer that is not greater than is.

From the formulas for converting polar coordinates into Cartesian coordinates, one obtains for the functional determinant as the determinant of the Jacobi matrix : 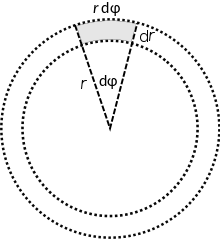 Area element of width and height in polar coordinates

With the functional determinant we get for the surface element in polar coordinates:

As the adjacent picture shows, the surface element can be interpreted as a differential rectangle with width and height .

From the transformation equations above

The following applies to the Cartesian line element

what follows in polar coordinates:

Speed ​​and acceleration in polar coordinates

To do this, the movement is broken down into a radial and a perpendicular “transverse” component. The following applies to the velocity vector

with the unit vectors and .

The following applies to acceleration 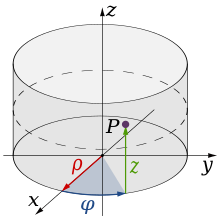 If you align a Cartesian coordinate system so that the -axis coincide, the -axis points in the direction and the angle increases from the -axis to the -axis (directed to the right), then the following conversion formulas result:

For the conversion of Cartesian coordinates into cylindrical coordinates, the same formulas result for and as for polar coordinates.

The basis vectors , and are orthonormal to one another and in this order form a right system.

The addition of the straight-line coordinates has no influence on the functional determinant:

Hence the following results for the volume element :

This also corresponds to the square root of the amount of the determinant of the metric tensor , with which the coordinate transformation can be calculated (see Laplace-Beltrami operator ).

The following representations of the Nabla operator can be used in the given form directly on scalar or vector-valued fields in cylindrical coordinates. The procedure here is analogous to vector analysis in Cartesian coordinates.

The representation of the gradient is transferred from Cartesian to cylindrical coordinates as follows:

In the case of divergence , there are additional terms that result from the derivatives of the , and dependent unit vectors:

The representation of the rotation is as follows: 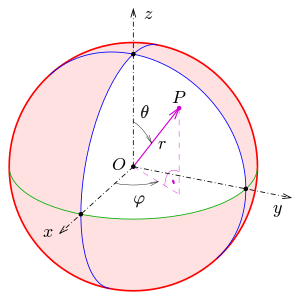 Spherical coordinates are essentially plane polar coordinates that are supplemented by a third coordinate. This is done by specifying an angle for the third axis. This third coordinate describes the angle between the vector to the point and the axis. is zero if and only if lies in the -axis.

It is also possible to generalize the polar coordinates with for a -dimensional space with Cartesian coordinates for . To do this, one introduces another angle for each new dimension (inductive structure via the same) , which indicates the angle between the vector and the new, positive coordinate axis for . Using the same procedure, the angular coordinate of the 2-dimensional space can be constructed in a consistent manner by means of inductive means from the number line, provided that negative values, i.e. completely , are also permitted for the radial coordinate .

Thus the -dimensional volume element is: