The Euclidean geometry is first the familiar to us, descriptive geometry of two- or three-dimensional . However, the term has very different aspects and allows generalizations. This mathematical branch of geometry is named after the Greek mathematician Euclid of Alexandria .

The geometry of Euclid

In the narrowest sense, Euclidean geometry is the geometry that Euclid set out in The Elements . 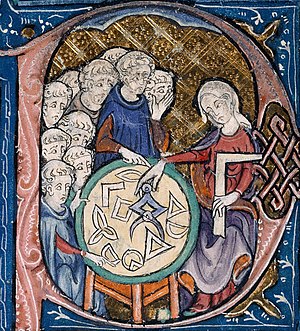 The geometry (personification) taught in Euclidean geometry. (Illustration from the beginning of the 14th century)

For over two thousand years geometry was taught according to this axiomatic structure. The phrase "more geometrico" (Latin: "in the manner of (Euclidean) geometry") still serves today as an indication of a strictly deductive argumentation.

Euclid does this as follows:

The book starts with a few definitions , for example:

In addition to these more or less clear definitions of basic terms, there are also definitions that are to be understood as word introductions in the modern sense , because they are used in abbreviated form in the following text, for example for parallels : “Parallel are straight lines that lie in the same plane and if they are extended to infinity on both sides, they do not meet on either side. "

The elements give a total of 35 definitions.

After the more descriptive definitions, the five more defining postulates follow . What is required here is

Building on this, Euclid now deals with problems ...

Example : "Build an equilateral triangle over a given route."

To solve a problem or to prove a theorem, only the definitions, postulates and axioms as well as previously proven theorems and the constructions from previously solved problems are generally used.

Geometry and Reality in Euclid

As a Platonist , Euclid was convinced that the postulates and axioms he had formulated reflected reality. According to Plato's theory of ideas , they belong to an ontologically higher level than the figures drawn in the sand, which are their images. The relationship between an imperfectly drawn circle and the perfect idea of ​​the circle illustrates the difference between the sensually perceptible world and the intelligible (only spiritually perceptible) world, which is illustrated in Plato's allegory of the cave .

Differences from a purely axiomatic theory

From today's perspective, the elements do not meet the requirements of an axiomatic theory :

It follows that the inferences inevitably make use of a variety of unspoken assumptions.

In another sense, Euclidean geometry is a strictly axiomatic theory that emerged at the end of the 19th century . The above problems became apparent when Bertrand Russell , David Hilbert, and other mathematicians strove for a more rigorous foundation of mathematics . They were solved by Hilbert, who published the results in his work Foundations of Geometry (1899). Forerunners were Hermann Graßmann , Moritz Pasch , Giuseppe Peano and others. Several other axiom systems for Euclidean geometry were also established after Hilbert.

David Hilbert uses "three different systems of things", namely points, lines and planes, of which he only says: "We think (they) us". These things should be “thought of” in “three basic relationships” to one another, namely “lying”, “between” and “congruent”. To link these "things" and "relationships" he then sets up 21 axioms in five groups:

Geometry and Reality at Hilbert

As a representative of formalism , Hilbert declares it irrelevant what these points, lines and planes have to do with reality. The meaning of the basic concepts is determined by the fact that they fulfill the axioms. So he begins the section on the axioms of the link with the sentence: "The axioms of this group represent between imported above things: points, lines and planes a link here and are as follows: ..." The definitions of basic terms thus take place implicitly .

On the other hand, Hilbert explains in the introduction to his work: "The present investigation is a new attempt to set up a complete and as simple as possible system of axioms for geometry ...". With this reference to geometry he makes it clear that he is not concerned with any arbitrary formalism, but with a specification of what Euclid meant by "geometry" and what we all know as the properties of the space around us. Hilbert succeeded in making this more precise, and it turns out to be much more complex than Euclid suspected.

Axiom systems established later are basically equivalent to Hilbert's. They take into account the advancement of mathematics.

For every straight line there is a different parallel. If two lines are parallel to a third, then they are also parallel to each other.

The impetus was given by dealing with the postulate of parallels . After centuries of unsuccessful attempts to trace this fifth postulate of Euclid back to a simpler one, the Hungarian János Bolyai and the Russian Nikolai Ivanovich Lobachevsky concluded around 1830 that a negation of this fifth postulate would lead to logical contradictions, if this actually led to simpler statements can be returned. So the two mathematicians denied this postulate and each defined their own (substitute) postulates which, contrary to expectations, led to a logically perfectly flawless geometrical system - the non-Euclidean geometries: “It wasn't the proof that was so unsettling, but rather its rational by-product, that already soon to overshadow him and almost everything in mathematics: mathematics, the cornerstone of scientific certainty, had suddenly become uncertain. One now had to deal with two contradicting visions of inviolable scientific truth ”, which led to a deep crisis in the sciences (Pirsig, 1973).

The exact formulation of the “hyperbolic” axiom, which in the geometry of Lobachevsky, the hyperbolic geometry , takes the place of the axiom of parallels, reads: “... at least two straight lines pass through a point not lying on a straight line, which are in a plane with it and don't cut them ... "

Whether non-Euclidean geometries (there are different ones) can describe real space is answered differently. Mostly they are understood as purely abstract mathematical theories, which only deserve the name "geometry" because of the similarity of the terms and axiom systems.

In the meantime, however, these theories have proven to be very relevant in theoretical physics for describing the reality of our universe .

The analytical geometry of plane and space

In a coordinate system , a point can be represented as a pair (in plane geometry) or as a triplet of real numbers . A straight line or plane is then a set of pairs of numbers (or triples) whose coordinates satisfy a linear equation . The analytical geometry of the real number plane or the real number space built up on this proves to be completely equivalent to that defined axiomatically.

Analytic geometry can be viewed as a model for axiomatic theory. Then it provides a proof of the consistency of the axiom system (which is, however, a consistent foundation of real numbers has to take for granted).

But one can also regard the analytical approach as an independent (and more convenient) foundation of geometry; From this point of view, the axiomatic approach is only of historical interest. Bourbaki, for example (and also Jean Dieudonné) completely dispenses with the use of original geometric terms and considers the topic to be over with the treatment of the topological vector spaces .

Euclidean geometry as a theory of measurement

Euclidean geometry is also the geometry in which lines and angles are assigned dimensions.

In the axiomatic structure of Euclidean geometry, numbers apparently do not appear at all. However, it is stipulated how a congruent line is added to a line in the same direction, i.e. how it is doubled - and consequently also multiplied with any natural number . There is also a construction to divide a given path into n equal parts. If any line is now marked as a unit line, then it is possible to construct lines whose measure is any rational number . This is the essential subject of ancient Greek arithmetic .

Other constructions result in distances that do not have a rational number as a measure. (For example the diagonal of the square over the unit distance or its sections when divided according to the golden section .) Having proven this testifies to the unbelievably high level of Greek mathematics even at the time of the Pythagoreans . Thus the introduction of irrational numbers is necessary. 2000 years later, Hilbert's axiom of completeness ensures that all real numbers can appear as measures for distances.

The definition of dimensions for angles is similar. There is no need to specify a "standard angle ", as the full angle (or the right angle ) is an objective dimension. On the other hand, dividing the angle into equal parts is much more problematic; An angle can by no means be constructed for every rational angle measure. Even dividing the angle into three generally fails.

The metric introduced in this way is equivalent to the Euclidean metric of the "analytic" or induced by the Euclidean norm . For the points given by their coordinates and is therefore .

In analytical geometry, dimensions for angles can be defined using the scalar product of vectors.

As an analytical geometry, Euclidean geometry can easily be generalized for any (also infinite) number of dimensions.

In addition to the straight lines and planes, there are higher-dimensional, linear point sets, which are referred to as hyperplanes. (In a narrower sense, a hyperplane of a -dimensional space is as "large" as possible, that is, a -dimensional subspace.)

The number of dimensions is not limited and does not have to be finite. For every cardinal number a can Euclidean space of dimension define.

Rooms with more than three dimensions are fundamentally inaccessible to our imagination. They were also not designed with the aim of portraying the human experience of space. Similar to the non-Euclidean geometries, there were also references to theoretical physics here: The spacetime of the special theory of relativity can be represented as four-dimensional space. In modern cosmology, there are explanatory approaches with considerably more dimensions.

If one renounces the 3rd and 4th Euclidean postulate (i.e. the terms “circle” and “right angle”) or, for a more precise definition, restricts oneself to Hilbert's axioms of connection and parallels , one obtains an affine geometry . It was first developed by Leonhard Euler . The terms “distance” and “angle measure” do not appear here, but distance relationships and parallelism do .

If the axiom of parallels is replaced by the stipulation that two straight lines located in one plane should always have an intersection, the affine geometry becomes a projective geometry .

If the axioms of arrangement and continuity are omitted, affine and projective geometries can also consist of finitely many points.