Nicolas Bourbaki is the collective pseudonym of a group ( collective of authors ) of predominantly French mathematicians who have been working on a multi-volume textbook on mathematics in French since 1934 - the Éléments de mathématique  - and who held seminars on their joint book project several times a year at various locations in France . Allegedly Bourbaki worked at the University of Nancago (pseudonym: moved together from Nancy and Chicago , the universities where some of the leading Bourbakists were at that time, Jean Dieudonné called his villa in Nice the Villa Nancago ). The publications follow the tradition of the axiomatic foundation of mathematics.

Bourbaki did not see it as his job to create new mathematical knowledge. Rather, existing mathematical findings should be reprocessed and placed in a stringent context. The axiomatic representation of set theory , based on the school of David Hilbert , served as the basis, and there was no doubt of its outstanding performance at the time of the founding of Bourbaki.

The structure and notation of the work of the Bourbaki group are extraordinarily rigid. The argument basically goes from the general to the particular. Everything that is said is based on what has been said before. The reference system in the first six books is absolutely linear: each reference refers to an earlier Bourbaki text. References to other works are considered superfluous.

The original goal was to only deal with topics that were necessary for a systematic development of the fundamentals of mathematics. Eliminated were then the lattice theory , the theory of numbers and the total applied mathematics . The geometry is regarded as done with the treatment of the topological vector spaces .

In a 1997 interview, Bourbaki member Pierre Cartier responded to later criticism of educational deficiencies in the presentation :

“The misunderstanding was that a lot of people thought that it should be taught as it was presented in the books. One can think of Bourbaki's first books as an encyclopedia of mathematics containing all the information necessary. That's a good description. If you look at it as a textbook, it's a disaster ”.

The basic rules of the group included the anonymous publication under the common pseudonym, the merciless discussion of every editorial proposal and the retirement at the age of fifty. The composition of the group and its working methods remained shrouded in mystery for a long time; It was only when they were old that the founding members began to speak publicly about Bourbaki. It is now known that Jean Dieudonné had the largest share in the first draft and in the final editing of the published volumes.

At their meetings, the group often discussed drafts of individual textbook chapters very vigorously, decided on countless changes, and then handed the manuscripts over to new authors for further processing. At the next meeting, however, no one was bound by the resolutions previously made; it was criticized again and a new revision was decided. Each chapter typically underwent ten revisions that stretched out over eight to twelve years. Every member had the right of veto.

Members met three times a year, often at country hotels and resorts, with recreational activities and accommodations being funded by increasing income from book sales. The news magazine La Tribu was used for communication within the group. 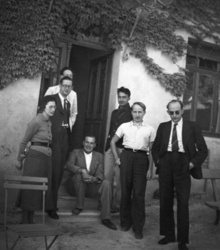 In 1939 the first of a total of 40 volumes was published, which in turn are summarized in six books:

This corresponded to the general plan of 1939 and even 1950 for the first part (there were a part IIIb geometric topology (with overlaps , the fundamental group , fiber acknowledge homotopies designed by Serre), and more VII manifolds , VIII Analytical functions and IX Lie groups planned, followed by Part 2 Commutative Algebra, Part 3 Algebraic Topology and Applications, Part 4 Functional Analysis ). Jean Dieudonné originally had much more extensive plans, for example with a draft in 27 books in 1940 and later regular suggestions for further books. The first six books were essentially complete by the 1950s. In 1957, Alexander Grothendieck proposed an expansion of books VII (Homological Algebra), VIII (Elementary Topology) and IX (Manifolds) and also wanted to expand the algebraic fundamentals, but his plans did not get through because the other members feared for so long Getting stuck in the basics. Grothendieck then went his own way and left Bourbaki in the late 1950s.

Spectral theory (Volume IX) was added in 1983 as the last volume for a long time. In 1998, Chapter 10 of Commutative Algebra was published. In 2012, the eighth chapter (modules and semi-simple rings) of algebra appeared in a completely new edition, and in 2016 a new volume was published by Springer Verlag:

The most successful volumes were those on Lie groups and commutative algebra. Jean Dieudonné published the repeatedly interspersed digressions on the history of mathematics separately as Bourbakis Eléments d'histoire de mathématique (1960, 1969). He also wrote an overview of modern mathematics from “Bourbaki's perspective”: Panorama of pure mathematics as seen by Bourbaki 1982.

The group's six founding members were Henri Cartan , Claude Chevalley , Jean Delsarte , René de Possel , Jean Dieudonné and André Weil . You had recently graduated from the École normal supérieure and are now teaching at French provincial universities. In their teaching activities, they found the available textbooks inadequate and hopelessly out of date, especially in comparison to the simultaneously flourishing German axiomatic school around David Hilbert and Emmy Noether in Göttingen and Emil Artin in Hamburg, where some of the founding members had studied. At the center of mathematical research in France was the traditionally strong analysis there, represented for example by Jacques Hadamard , while algebra and number theory were hardly cultivated. At their occasional meetings, they decided to write their own textbook on analysis and soon came to the conclusion that they had to actually rewrite all of the basics of mathematics. They originally estimated it would take three years to do this. In fact, it took four years before even the first chapter appeared. At one of their first meetings, the group chose the name Bourbaki, after a student joke that has become legend at the École Normale Supérieure and indirectly after General Charles Denis Bourbaki from the Franco-German War of 1870/71.

At the turn of the millennium it seemed as if there would be no more significant publications. Towards the end of the twentieth century, Cartier said Bourbaki was a dinosaur with its head too far from its tail.

The group's slow decline has a number of reasons that can perhaps be summarized as follows:

In addition, there was a long, unpleasant legal battle with the publisher in the late 1970s.

To this day there is the Association des Collaborateurs de Nicolas Bourbaki (“Society of NB Collaborators ”), which organizes the famous Bourbaki Seminars ( Séminaire Nicolas Bourbaki ) three times a year - international conferences usually attended by more than 200 mathematicians. They are taking place today at the Institut Henri Poincaré .

In 2016 a new volume on algebraic topology was published.

Bourbaki's strictly logical style has had a decisive influence on today's mathematics.

Specifically, we owe Bourbaki the symbol for the empty set , the symbol for the implication, the abbreviations N , Z , Q , R , C for the sets of natural, whole, rational, real and complex numbers (in addition to the notation with the double prime ) as well as the words bijective , injective and surjective for properties of functions.

In France , Bourbak's axiomatics often still dominates the entire university teaching in mathematics as a major or minor; Foreign observers like Vladimir Igorewitsch Arnold consider this dogmatic formalism to be a crime against students ("the (I would say criminal) formalization of mathematics and of mathematical education").

In the 1960s, the Bourbaki trend also spread to school lessons (“ New Mathematics ”), one of the initiators being Jean Dieudonné.

First the French editions are listed. First editions, publishers and revised new editions are given as well as the numbers used by Bourbaki. ASI stands for Actualités Scientifiques et Industrielles , a series by Hermann.

The books have been published by Springer since 2006 (including new editions).

Bourbaki is mentioned in the song "Morph" from the album Trench by the duo twenty one pilots . The song "Nico and the Niners" from the same album is also a reference to Bourbaki.

In addition to the French original edition of the elements (originally by Hermann), English translations of many volumes have also been published (by Springer Verlag).