There are two approaches to differentiable manifolds: on the one hand, as subsets of a higher-dimensional Euclidean space , which are described either by equations or by parameterizations and are dealt with in the article Submanifolds of the

, and on the other hand as abstract manifolds whose differentiable structure is given by an atlas . The equivalence of the two perspectives is ensured by Whitney's embedding theorem .

The graphic illustrates a card change of cards and . The large circle symbolizes the topological space and the two lower smaller circles symbolize subsets of the .

A map of a topological space is a pair consisting of an in open, non-empty set and a homeomorphism

If and are two cards with , then the figure is called

applies. An atlas is called -differentiable with if all of its map changes are -diffeomorphisms .

If it is, one also speaks of a smooth structure .

A -time differentiable manifold is a topological Hausdorff space that satisfies the second axiom of countability , together with a -differentiable structure.

The differentiable manifold has the dimension when a map and thus all maps map into a subset of the .

A smooth manifold is also a topological Hausdorff space that satisfies the second axiom of countability, together with a smooth structure.

Complex manifolds are also smooth, but with the addition that the map changes are also biholomorphic . 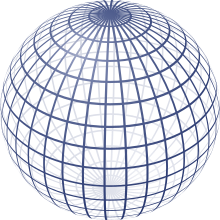 a map representation of (with regard to the two maps).

The mapping is now called continuously differentiable by the class or times if all map representations are of the class . The differentiability does not depend on the choice of cards. This results from the fact that the map change maps are diffeomorphisms and from the multidimensional chain rule . The continuity of does not follow from the differentiability, but must be assumed so that the cards can be chosen in such a way that applies.

Maps of the class , which can be differentiated as often as required, are also referred to as smooth maps .

The cases or are also possible. In this case there is no need for the cards.

A differentiable mapping of an interval into a manifold is called a path or parameterized curve . If the target area is , one speaks of a differentiable function .

A -dimensional submanifold of a -dimensional manifold ( ) is a subset that appears in suitable maps like a -dimensional linear subspace of the . This has a differentiable structure in canonical fashion.

However, there are also several approaches in the literature to define infinitely dimensional differentiable manifolds. Usually one replaces the space in the definition with a locally convex topological vector space (the so-called model space), such as a Fréchet space , a Banach space or a Hilbert space . One then speaks of locally convex manifolds, Fréchet manifolds, Banach manifolds or Hilbert manifolds. Of course, such a definition only makes sense when one has agreed on how to define differentiable and mappings between infinite-dimensional locally convex spaces. While this is relatively uncritical for Banach spaces ( Fréchet derivation ), there are different, non-equivalent approaches for any locally convex spaces.