In mathematics , the Euclidean space is first of all the “space of our intuition” as it is described in Euclid's elements by axioms and postulates (cf. Euclidean geometry ). Up until the 19th century it was assumed that this described the physical space that surrounds us . The addition “Euclidean” became necessary after more general spatial concepts (e.g. hyperbolic space , Riemannian manifolds ) had been developed in mathematics and it became apparent in the context of the special and general theory of relativity that other spatial concepts are required to describe space in physics ( Minkowski space , Lorentz manifold ).

Over time, Euclid's geometry was refined and generalized in several ways:

Euclidean space differs from affine space in that lengths and angles can be measured. One therefore draws up the images that contain lengths and angles. These are traditionally called congruence maps , other terms are movements and isometrics .

In the non-Euclidean spaces , such as the hyperbolic and elliptical spaces, the axiom of parallels does not apply.

In analytic geometry , Euclidean space is assigned a vector space . One possibility to do this is to take the amount of parallel displacements (translations), provided with the execution as an addition. Each shift can be described by an arrow that connects a point with its image point. Two arrows, which are parallel in the same direction and have the same length, describe the same displacement. Two such arrows are called equivalent and the equivalence classes are called vectors .

Two points and their position vectors

One can now also transfer the length and angle measurements from Euclidean space to vectors as the length of the associated arrows and angles between them. In this way a vector space with a scalar product is obtained . The scalar product is characterized by the fact that the product of a vector with itself is the square of its length . The formula results from the calculation laws for scalar products, the binomial formulas and the cosine law (applied to a triangle whose sides correspond to the vectors , and )

Here denotes the angle between the vectors and .

As soon as one has provided a real vector space with a scalar product, one can transfer the metric concepts of the Euclidean intuition space to this. The length (the norm , the amount ) of a vector is then the root of the scalar product of the vector with itself:

Two vectors are orthogonal (or perpendicular ) to each other if their scalar product is zero:

The coefficients are obtained by

If and are two- dimensional Euclidean vector spaces, a linear mapping is called a (linear) isometry if it contains the scalar product, i.e. if

applies to all . Such a mapping is also called an orthogonal mapping . An isometry is given lengths in particular

Conversely, any linear mapping that receives lengths is an isometry.

Euclidean vector spaces often serve as models for Euclidean space. The elements of the vector space are then referred to as points or vectors, depending on the context. No distinction is made between points and their position vectors. This can be computationally advantageous. Conceptually, however, it is unsatisfactory:

The concept of the Euclidean point space provides a remedy . This is an affine space over a Euclidean vector space. A distinction is made here between points and vectors.

In the language of algebra these properties mean: The additive group of the vector space operates freely and transitively on the set . 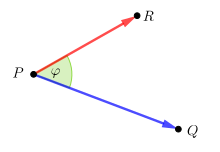 The angle is the angle between the vectors and

Line lengths, distances between points, angles and orthogonality can now be defined with the help of the scalar product of vectors:

The size of the angle is defined as the angle between the vectors and :

Length-preserving representations of a Euclidean point space are called isometries , congruence maps (in plane geometry) or movements . You will automatically get angles too. If there is a movement, there is an orthogonal mapping (linear isometry) , so that for all points and :

The -dimensional real coordinate space is the -fold Cartesian product of the set of real numbers, i.e. the set of -Tuples where the real numbers are. Depending on the context , the elements of the are called points or vectors, so no distinction is made between points and vectors.

As vectors, they are added component by component and multiplied by real numbers:

In this case, the elements of the often (ie.. As column vectors - matrices ) wrote:

With this scalar product it is a Euclidean vector space.

As in every Euclidean vector space, the length or norm of a vector is given by the square root of the scalar product with itself:

This norm is also called Euclidean norm or 2-norm and writes instead of also or .

The angle between two vectors and is then calculated through

Two vectors and are orthogonal if and only if

applies. The vectors of the standard base

are unit vectors and orthogonal in pairs, i.e. they form an orthonormal basis .

If one considers the elements of the as points, then the distance between the points and as the length of the connection vector is defined:

as a link between an orthogonal mapping and a parallel shift (translation) .

Every finite-dimensional real vector space can be provided with an orientation by choosing an ordered basis . While no orientation is marked for any Euclidean vector and point spaces, the coordinate space has a canonical orientation that is given by the standard basis: The ordered basis from the vectors is positively oriented.

is positively oriented if and only if the determinant formed from it is positive:

Euclidean space in other areas of mathematics

Classification of Euclidean spaces in the various types of topological spaces

The Euclidean distance function turns every Euclidean space into a metric space and thus in particular into a topological space .

As a topological space, Euclidean space is contiguous and contractible .