In hyperbolic, Euclidean and elliptical geometry, two straight lines that are connected to a normal are different from one another. 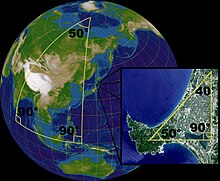 Between 1818 and 1826 Gauß headed the Hanoverian land surveying and developed methods with considerably increased accuracy. In this context, the idea arose that he was looking empirically for a curvature of the room by measuring the sum of the angles in a triangle formed by the Brocken in the Harz Mountains , the Inselsberg in the Thuringian Forest and the Hohen Hagen near Göttingen . Today it is seen by the majority as a legend, even if the possibility that Gauss was looking for deviations from the usual value of the angle sum of 180 ° cannot be ruled out with ultimate consequence. However, the accuracy of his instruments would have been far from sufficient to prove the tiny curvature of space in the earth's gravitational field. It is still not possible today.

It was Gauss' student Bernhard Riemann who developed the differential geometry of curved spaces and presented it in 1854. At the time, nobody expected this topic to be physically relevant. Tullio Levi-Civita , Gregorio Ricci-Curbastro and Elwin Bruno Christoffel further expanded the differential geometry. Einstein found a variety of mathematical tools for his general theory of relativity in their work .

The non-Euclidean geometries were not developed with the aim of making our spatial experience more precise, but as axiomatic theories in dealing with the problem of parallels . The existence of models for non-Euclidean geometries (e.g. by Felix Klein and Henri Poincaré ) proves that the parallel axiom of Euclid cannot be deduced from the other axioms and is independent of them.

One obtains non-Euclidean geometries by removing the axiom of parallels from the system of axioms or by changing it. The basic change options are:

Triangle on a saddle surface

Meanwhile, non-Euclidean geometry plays an important role in theoretical physics and cosmology . According to the general theory of relativity , the geometry of the universe differs from the Euclidean one because gravity fields "bend" space. Whether the geometry of the universe “on a large scale” is spherical (elliptical), even (Euclidean) or hyperbolic is one of the major current questions in physics.