A Lie group (also known as Lie group ), named after Sophus Lie , is a mathematical structure used to describe continuous symmetries. Lie groups are important tools in almost all parts of today's mathematics, as well as in theoretical physics , especially particle physics .

Formally, a Lie group is a group that can be understood as a differentiable manifold , so that the group connection and inverse formation are compatible with this smooth structure.

Lie groups and Lie algebras were introduced around 1870 by Sophus Lie in the Lie theory for the investigation of symmetries in differential equations . Independently of Lie, Wilhelm Killing developed similar ideas for studying non-Euclidean geometries . The older names continuous group or continuous group for a Lie group better describe what is now understood as a topological group . Each Lie group is also a topological group. 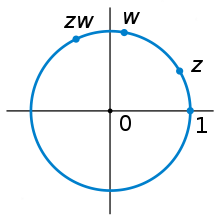 The circle with center 0 and radius 1 in the complex number plane is a Lie group with complex multiplication.

The unit circle in the complex number plane, i.e. H. the set of complex numbers of magnitude 1 is a subgroup of , the so-called circle group : The product of two numbers with magnitude 1 again has magnitude 1, as does the inverse. Here, too, one has a “group structure compatible with differential calculus”; H. a Lie group.

On the other hand, the crowd forms

of the rotary dies (rotations in ) a group; the multiplication is defined by

and the inversion through

If one identifies the set of matrices with the in an obvious way , then there is a differentiable submanifold and one can check that multiplication and inversion are differentiable, so it is a Lie group.

It turns out that it is in and are "the same" Lie group, d. that is, the two Lie groups are isomorphic . You can define a mapping by mapping to the complex number that lies on the unit circle. This is a group homomorphism because

It can be verified that this group homomorphism and its inverse mapping are differentiable. is thus a Lie group isomorphism. From the point of view of Lie group theory, the group of rotary matrices and the unit circle are the same group.

An important motivation of Lie group theory is that one can define a Lie algebra for Lie groups and that many group theoretical or differential geometric problems can be traced back to the corresponding problem in Lie algebra and solved there. (“ Linear algebra is easier than group theory ”.) To define Lie algebra, one needs the differentiability and the compatibility of the group operations with it.

A Lie group is a smooth, real manifold that also has the structure of a group , so that the group connection and the inversion can be differentiated as often as desired . The dimension of the Lie group is the dimension of the underlying manifold. One can show that the underlying manifold of a Lie group even has a real-analytic structure and the group multiplication and inversion are automatically (real) analytic functions .

A complex Lie group is a complex manifold with a group structure, so that the group connection and the inversion are complex differentiable .

Lie algebra of the Lie group

Each scalar product auf defines a left-invariant Riemannian metric auf . In the special case that this metric is additionally rechtsinvariant that true exponential of the Riemann manifold at point -group Lie exponential map with the match.

The connection between the multiplication in the Lie group and the Lie bracket in its Lie algebra is established by the Baker-Campbell-Hausdorff formula :

A homomorphism of Lie groups is a group homomorphism that is also a smooth map . One can show that this is already the case when is continuous and that it must then even be analytical .

For every Lie group homomorphism , a Lie algebra homomorphism is obtained by differentiation in the neutral element . It applies

for everyone . If and are simply connected , then every Lie algebra homomorphism clearly corresponds to a Lie group homomorphism.

An isomorphism of Lie groups is a bijective Lie group homomorphism.

Be a Lie group. A Lie subgroup is a subgroup of along with a topology and smooth structure that makes that subgroup a Lie group again.

Not every Lie group is isomorphic to a subgroup of a general linear group. An example of this is the universal superposition of SL (2, R) .

According to the authoritative sources on the early history of the Lie groups, Sophus Lie himself regarded the winter of 1873–1874 as the date of birth of his theory of continuous groups . Hawkins suggests, however, that it was "Read's amazing research activity during the four-year period from the fall of 1869 to the fall of 1873" that led to the creation of that theory. Many of Lie's early ideas were developed in close collaboration with Felix Klein . Lie saw Klein daily from October 1869 to 1872: in Berlin from late October 1869 to late February 1870 and in Paris, Göttingen and Erlangen for the following two years. Lie states that all of the main results were obtained in 1884. However, during the 1870s, all of his treatises (except for the very first communication) were published in Norwegian journals, which prevented it from being recognized in the rest of Europe. In 1884 the young German mathematician Friedrich Engel worked with Lie on a systematic treatise on his theory of continuous groups. These efforts resulted in the three-volume work Theory of Transformation Groups, the volumes of which were published in 1888, 1890, and 1893.

Hilbert's fifth problem asked whether every locally Euclidean topological group is a Lie group. (“Locally Euclidean” means that the group should be a manifold. There are topological groups that are not manifolds, for example the Cantor group or solenoids .) The problem was not solved until 1952 by Gleason, Montgomery and Zippin, with one positive answer. The proof is closely related to the structure theory of locally compact groups , which form a broad generalization of Lie groups.

Read's ideas weren't isolated from the rest of the math. Indeed, his interest in the geometry of differential equations was initially motivated by the work of Carl Gustav Jacobi on the theory of partial differential equations of the first order and the equations of classical mechanics . Much of Jacobi's work was published posthumously in the 1860s, generating tremendous interest in France and Germany. Lies idée fixe was to develop a theory of the symmetry of differential equations that would accomplish for them what Évariste Galois had achieved for algebraic equations: namely, to classify them with the help of group theory. Additional impetus to consider constant groups came from ideas by Bernhard Riemann on the fundamentals of geometry and their development by Klein (see also Erlangen program ).

Thus, three main themes of 19th century mathematics were brought together by Lie in the creation of his new theory:

Even if Sophus Lie is rightly regarded today as the creator of the theory of continuous groups, a great step forward in the development of the corresponding structural theory, which had a profound influence on the subsequent development of mathematics, was made by Wilhelm Killing , who wrote the first article in 1888 published a series entitled The Composition of Continuous Finite Transformation Groups.

The work of Killings, which was later refined by Élie Cartan , led to the classification of semi-simple Lie algebras , Cartan's theory of symmetric spaces, and Hermann Weyl's description of the representations of compact and semi-simple Lie groups by weights.

Weyl brought the early period in the development of Lie group theory to maturity by not only classifying the irreducible representations of semi-simple Lie groups and relating the group theory to the newly emerged quantum mechanics, but by incorporating Lie's theory as well gave a more solid foundation by clearly distinguishing between Lie's infinitesimal groups (today's Lie algebras) and the actual Lie groups and began to study the topology of the Lie groups. The theory of Lie groups was systematically elaborated in contemporary mathematical language in a monograph by Claude Chevalley .

Let be a compact Lie group with killing form and adjoint representation . Then defines an -invariant scalar product on the Lie algebra and thus a bi-invariant Riemannian metric . The following formulas apply to this metric, which allow differential geometric quantities to be determined using linear algebra (calculation of commutators in ):

In particular, the cutting curvature of bi-invariant metrics on compact Lie groups is always nonnegative.

Lie groups can also be classified according to their algebraic , group-theoretical properties. Lie groups can be simple , semi-simple , resolvable, nilpotent, or abelian . It should be noted that certain properties are defined differently in the theory of Lie groups than is otherwise usual in group theory: A connected Lie group is called simple or semi-simple if its Lie algebra is simple or semi-simple . A simple Lie group G is then not necessarily simple in the group-theoretical sense. But the following applies:

If G is a simple Lie group with center Z, then the factor group G / Z is also simple in the group-theoretical sense.

The theory of the (finite-dimensional, real or complex) Lie groups presented here can be generalized in various ways: