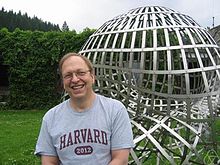 Harris studied at Harvard University , where he received his doctorate from Phillip Griffiths in 1978 (A bound on the geometric genus of projective varieties) . Then Moore was an instructor at the Massachusetts Institute of Technology , later a professor at Brown University and from the late 1980s back at Harvard. From 2002 to 2005 he was head of the math department at Harvard.

Harris is known for various textbooks on algebraic geometry, some with Griffiths, in which he emphasizes connections to classical algebraic geometry of the 19th century and the Italian school at the beginning of the 20th century.

In 1982 he became a research fellow of the Alfred P. Sloan Foundation ( Sloan Research Fellow ). In 1983 he was invited speaker at the International Congress of Mathematicians in Warsaw ( Recent work on

). In 2002 he was elected to the American Academy of Arts and Sciences and in 2011 to the National Academy of Sciences .