The 1998 congress in Berlin had 3346 participants. The program comprised 21 one-hour plenary lectures and 169 mathematicians selected by the organizers gave 45-minute lectures with specialists in their field. In addition, each participant could present his or her work with a short 15-minute presentation or a poster . Holding a plenary lecture or being invited as an invited speaker at all is considered a special honor.

At the 1900 Congress, David Hilbert presented his famous list of 23 open problems in mathematics .

Due to the aftermath of the First World War, mathematicians from Germany, Austria, Hungary and Bulgaria were excluded from the congresses in Strasbourg in 1920 and Toronto in 1924. As early as Toronto, the US delegation - supported by Sweden, Norway, Great Britain, the Netherlands, Italy and Denmark - submitted a motion to reconsider this and the restrictions were lifted for the 1928 Congress in Bologna by the new IMU President Salvatore Pincherle . 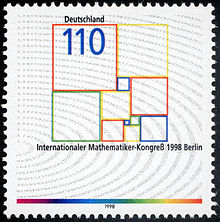 German special postage stamp from 1998 for the congress in Berlin