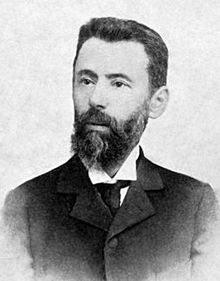 Pincherle was the son of a Jewish businessman and spent his childhood in Marseille . From 1869 he studied with Enrico Betti and Ulisse Dini at the University of Pisa . In 1874 he graduated and became a school teacher in Pavia. With a scholarship, he studied in 1877 at the University of Berlin with Karl Weierstraß , who had a great influence on him and whose teaching he spread in Italy (first in an overview article in 1880 in the Giornale di Matematiche, which became influential in Italy). From 1880 to 1928 he was a professor at the University of Bologna , after having been a professor in Palermo for a few months in 1880. In 1922 he founded the Unione Matematica Italiana ("Italian Mathematical Union") in Bologna , of which he was the first president until 1936. In 1928 he was President of the Third International Congress of Mathematicians in Bologna , where he was instrumental in ensuring that German mathematicians were re-admitted. In 1924 he gave a plenary lecture at the International Congress of Mathematicians in Toronto (Sulle operazioni funzionali lineari).

Pincherle worked on functional equations and functional operators and, together with Vito Volterra , with whom he worked, is considered to be one of the founders of functional analysis .

He was u. a. Member of the Accademia dei Lincei , the Bavarian Academy of Sciences and Fellow of the Royal Society of Edinburgh .