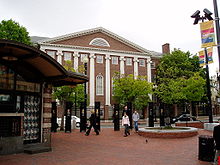 Cambridge [ ˈkeɪmbrɪdʒ ] is a city in the US state of Massachusetts and a suburb of Boston . It was named in honor of the English city ​​of Cambridge , where the city's founding fathers studied ( Cambridge University ). Cambridge is known through Harvard University and the Massachusetts Institute of Technology , two of the most prestigious universities in the world. According to the last census in 2010, the population was 105,201 (2017 estimate: around 114,000).

Cambridge is located in Middlesex County in the US state of Massachusetts. The district was abolished in 1997 and only exists today as a geographical description. Cambridge and Lowell were the county towns of Middlesex Counties.

The population structure is diverse, with a wide variety of people living in Cambridge - from Harvard professors to the poorest immigrants . This diversity adds to the liberal atmosphere and can in some ways be compared to the university town of Berkeley , California . Because of its famous liberal politics, the city is often called "The People's Republic of Cambridge"; Political organizers regularly gather at Harvard Square Tube Station.

Cambridge has been called "The City of Squares", most likely because most of its main intersections are known as "Squares". Very few "squares" have four sides. Each of these "squares" functions as a kind of neighborhood center. This includes:

Even if you often see printed references to the "Boston / Cambridge Area", Cambridge prefers to preserve its own identity. This is entirely appropriate as Cambridge has a large number of jobs and some parts of the city are even more urban than parts of Boston . 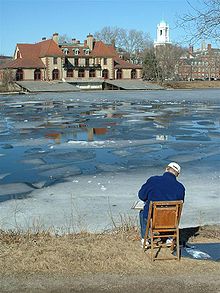 View from Boston of Harvard's Weld Boathouse and Cambridge; in the foreground the Charles River

Cambridge is bordered by Boston to the east and south, Somerville and Arlington to the north, and Watertown and Belmont to the west .

Cambridge has a nine-member city council and a six-member school committee. City councilors and committee members are elected every two years using the single transferable vote (STV) system. Since the dissolution of the New York City Community School Boards in 2002, the council has been unusually the only board of directors in the United States to use STV.

Cambridge is served by the subway line Red Line of the Massachusetts Bay Transportation Authority (MBTA), this also represents the connection with the neighboring city of Boston. Within the city the four lines of the trolleybus Cambridge and various bus lines operate , also for the The MBTA is responsible for road transport.