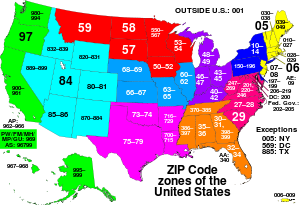 ZIP code on the front of a post office in Georgia

The ZIP Code [ zɪp ˌkoʊd ] (abbreviation for Z one I mprovement P lan ) is the zip code of the postal service of the United States , United States Postal Service . It is a five-digit code introduced on July 1, 1963, and expanded by four digits in 1983.

The zip code is written after the state name. Each of the approximately 30,000 post offices has its own code. The lowest postcode of a place is in the Caribbean - 00601 in Adjuntas, Puerto Rico - and the highest is in the west - 99950 for Ketchikan , Alaska . Each address has an additional four digits to make the sorting process easier. In addition to the ZIP code, every address must also contain the name of the city and the abbreviation of the state .

The ZIP code also has a useful side function. An online platform can be used to find out who his or her congressman is in the US House of Representatives in the Capitol in Washington, DC using the ZIP code .

The ZIP code consists of nine digits and appears two spaces after the state abbreviation with a hyphen between the fifth and sixth digits. Due to the fact that the ZIP code extension met with resistance from postal customers, the four-digit addition is no longer required today.

Meanwhile, the ZIP code is internationally recognized as a universal name for the postcode.

Due to the increasing use of the Internet for ordering goods from distant countries, the request to enter the "ZIP code" usually appears in the address view of the provider. The German postcode can always be entered there. By adding the target country z. B. GERMANY , the breakdown of the ZIP code only takes place in the country of destination. The previously used country code in front of the postcode (e.g. D or DE ) should not be used, as the large number of country codes used differently around the world has often led to problems with sorting and thus to delays and annoyance among customers. It is sufficient to state the country of destination under the location. Please note: