The title of this article is ambiguous. Further meanings are listed under Coimbra (disambiguation) .

The university town of Coimbra [ ku'ĩbɾɐ ] (lat. Conimbricae ) is the capital of the District of Coimbra ( Distrito de Coimbra ) and lies on the Rio Mondego , which flows 40 km west into the Atlantic. Coimbra has around 143,000 inhabitants (2011), including around 30,000 students, and was the cultural capital of Portugal in 2003 .

About 150 km from northern Porto and about 200 km from Lisbon in the south, Coimbra is the most important city in the Centro Region . While some districts are to the left of the Mondego, the actual city rises up an elevation to the right until it reaches its highest point at the clock tower of the old university. From there you can see the wooded foothills of the Iberian Scheidegebirge with the north-east running Serra do Buçaco and Serra do Caramulo and the south-east Serra da Lousã .

The city's origins are believed to be in the Celtic period.

In the early imperial period , the Romans founded a city called Aeminium on the site . During this period the city was an important stop on the Roman road from Olisipo ( Lisbon ) to Bracara Augusta ( Braga ). Evidence of this era are the foundations of the aqueduct, which was rebuilt in the 16th century, and above all the cryptoporticus, the foundation of the forum, located under the old episcopal palace (today Museu Machado de Castro).

In 468 the nearby center of Conimbriga was destroyed by the Suebi and Aeminium took over the function (bishopric) and the name.

In 711 the city was conquered by the Moors . The place in Al-Andalus only played a subordinate role, with up to 5,000 inhabitants it was nevertheless the most important north of the Tejo . Through the betrayal of Saʿdūn as-Surunbāqīs , the Moors lost Coimbra again in 878, the Banū Dānis settling in Coimbra and the rest of the Muslim population were expelled. In 987 the city was destroyed during the renewed Moorish conquest by the general Almansor . Coimbra was not recaptured until 1064 by King Fernando de Castilla y León . Moors conquered the city one last time in 1117, but they finally evacuated it after a few days.

Coimbra was - shortly after Guimarães when the independent Kingdom of Portugal was founded in 1139 - the second capital of Portugal. It retained this status until 1256. After Lisbon became the capital, the city's position in the country declined, but has remained important to this day, especially as a university city. The episode of Inês de Castro and King Pedro I, deeply anchored in the national consciousness, took place there in the mid-14th century.

The University of Coimbra , founded by King Dom Dinis in 1290, is the oldest university in Portugal and one of the oldest in Europe.

Coimbra suffered great damage from the 1755 earthquake . During the Napoleonic Wars on the Iberian Peninsula , Wellington was able to repel French attacks by a French army commanded by Masséna at Buçaco northeast of Coimbra on September 27, 1810 and subsequently continued his retreat behind the lines of Torres Vedras . From March 12 to 15, 1811, the French rearguard at Coimbra fought a series of skirmishes against the English, which resulted in the evacuation of Coimbra by the French. In 1834 Dom Miguel moved his seat here. On July 7, 1846, a miguelist uprising broke out in Coimbra, which was suppressed by the Duke of Saldanha because of his victory at Torres Vedras, whereupon the Duke moved into Coimbra on January 4, 1847.

The reforms of the Marquês de Pombal in the 18th century gave the University of Coimbras new impetus and the city an economic boom. The city experienced a renewed growth spurt from the middle of the 19th century. With the railroad and the construction of new residential areas and their connection with one another, construction activity and the number of residents grew. When the authoritarian Estado Novo regime of the former Coimbra student and professor Salazar prompted the monumental new building with many new buildings on the university campus in the 1940s, a comparable effect led to a further growth impulse for the city.

By concentrating on universities and hospitals, Coimbra was able to benefit less from the general upswing in Portugal since the Carnation Revolution in 1974 and Portugal's accession to the EU in 1986, especially in the economic boom years of the 1990s, and fell behind its traditional third place of cities in terms of population and economic importance Portugal's back. Thanks to its history and its scientific and cultural influence in Portugal, the city has retained its social importance to this day.

The European roads E01, E80 and E801 run through Coimbra. With its connections to the A1 and A14 , the city is connected to the national motorway network.

The railway line from Porto to Lisbon ( Linha do Norte ) runs directly past Coimbra, with the Coimbra-B train station just outside the city (northwest near the suburb of Santa Cruz) before the train tracks cross the Mondego River. It is a stop on the Alfa Pendular express train. The international Sud-Express , which emerged from the historic luxury train of the same name , also stops here.

The Coimbra-A terminus station carries regional traffic, especially trains on the inter - regional and regional lines, to the city center.

Coimbra is integrated into the national bus network of Rede Expressos .

The city only maintains a small quay for tourist excursion boats and sports activities on the banks of the Mondego. The nearest sea port is Figueira da Foz .

The municipal transport company Serviços Municipalizados de Transportes Urbanos de Coimbra (SMTUC) serves the city and its surroundings with bus routes. Coimbra today has the only trolleybus network in Portugal. From 1911 to 1980 there was also the Coimbra electric tram . The Ramal da Lousã regional train is to be expanded into the Mondego Metro .

Of the 5,441 companies in the Coimbra district, 29 are among the 1000 largest in Portugal. Some of the emerging high-tech companies supply the health sector, which is represented in Coimbra with facilities of supraregional importance: the HUC university clinics, the CHC municipal hospital center and the IPO Portuguese cancer institute

Due to its position as a regional center with a wide catchment area in the more central parts of the Região Centro , trade has some importance, and tourism has also gained in importance.

With the University of Coimbra , founded in 1290, the city has one of the oldest universities in Europe, which was declared a World Heritage Site in 2013 . Around 22,000 students study here. Another 10,000 students are enrolled at the technical college, the Coimbra Polytechnic Institute . Some of them live in the traditional student housing communities, the republicas , which have contributed to the lively cultural life in the city since the 16th century.

Sea of ​​houses in Coimbra

Coimbra is the administrative seat of a district of the same name. The neighboring districts are (clockwise, starting in the north): Mealhada , Penacova , Vila Nova de Poiares , Miranda do Corvo , Condeixa-a-Nova , Montemor-o-Velho and Cantanhede .

The following municipalities ( Freguesias ) are in Coimbra County:

View of the upper old town with the Universidade de Coimbra 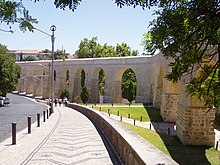 With the Fado de Coimbra , a student, stricter form of Fado sung only by men , the city produced its own musical genre. Not least thanks to the large number of students and the corresponding cultural life in its republicas and in the city in general, Coimbra has repeatedly produced important names in the wide-ranging Portuguese musical landscape. Names such as José Afonso and Adriano Correia de Oliveira stand for a renewed Fado de Coimbra and a songwriting tradition of protest songs , while later bands such as É Mas Foice or Tédio Boys became the nucleus of a number of independent bands as an expression of a lively underground in many areas of art. Anaquim are an example of a band that u. a. Folklore, fado and indie rock combined.

The fado “ April in Portugal ”, which was originally written in the late 1930s and published as “Coimbra”, is considered to be one of the most widely recorded Portuguese-language songs in the world .

With its newly built Estádio Cidade de Coimbra, Coimbra was a venue for the 2004 European Football Championship .

The city's best-known club is Académica de Coimbra , whose football division plays in the Segunda Liga and has won the Portuguese Cup twice, including its first game in 1939. The club is also active in numerous other sports and has won the Portuguese championship several times in basketball. Due to its oppositional role to the Estado Novo regime during the late 1960s, the club's history differs from the three large Portuguese clubs Sporting , Benfica and FC Porto , which dominate the sporting scene.

A variety of sports are practiced in the city, including numerous water sports such as rowing and regatta sailing , which can be found on the Mondego River. Since 2009, the city has been organizing the Torneio Internacional de Águas Abertas do Mondego (German: International Open Waters Tournament of the Mondego), an international open water swimming tournament with competitions over 500 m, 1000 m and 1500 m.

Sister cities of Coimbra are

→ Main article : List of personalities of the city of Coimbra

Coimbra is the birthplace of many well-known personalities. This includes a wide variety of Portuguese kings, scholars and artists. Portugal's second king, Sancho I , Prime Minister Pedro Passos Coelho and the pioneering guitarist Carlos Paredes came from Coimbra.