Frans Hogenberg (center) in his copper engraving satire on the stands

Colored copperplate view of the city of Münden, 1584 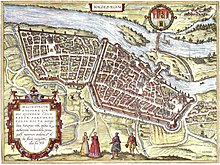 Colored copper engraving of the city of Magdeburg around 1572

The battle of Jemgum in a representation by Hogenberg

Frans Hogenberg (or Hoog [h] enbergh ; in German texts also Franz Hogenberg ; * 1535 in Mechelen , † 1590 in Cologne ) was an engraver and etcher who in 1572, together with Georg Braun, published the city view book Civitates Orbis Terrarum .

Frans Hogenberg was one of three children of Johann Nikolaus Hogenberg (* 1500, † 1539) and Jeanne (Johanna) Verstraeten († 1559). Frans Hogenberg married Katharina von Bönen in Mechelen, who had two children (Barbara and Johann). According to his own statement, he had lived as a religious refugee in Cologne since 1564, where he was arrested with his second wife Agnes Hogenberg-Lomar for secretly participating in a Reformed church service in 1579, but remained true to his adopted home. He lived for a time in Antwerp (1568), London (1570–1585) and Hamburg (1586).

In 1570 the Dutchman Abraham Ortelius published his famous world atlas Theatrum Orbis Terrarum - the first of its kind. Schefold translated the title with a description and contrafacture of the most prominent place in the world . The atlas was a great success and therefore probably an incentive for the edition of the Civitates Orbis Terrarum , which in size and design was quite similar to the Ortelius world atlas and was probably intended as a supplement.

The printed work Civitates Orbis Terrarum comprises over 600 realistic cityscapes and city ​​maps with a total of around 1,600 pages in the format 280 × 410 mm. Published in six volumes between 1572 and 1618, they showed all of the major cities in Europe, Africa, Asia, and even America. The publisher was Georg Braun , a theologian who lived from 1541 to 1622. Frans Hogenberg was the engraver for the first 4 volumes. He had previously created various maps for Abraham Ortelius. The 5th and 6th volumes were created by Simon van den Neuwel (also: Novellanus).

For our knowledge of medieval city ​​structures - before the immense destruction of the Thirty Years War and baroque renovations - these engravings by Hogenberg are unique. In addition to the wealth of details of the city and landscape, the richly furnished staffage - wagons, ships, contemporary costumes and numerous genre scenes in each case. Decorative coats of arms and individual elevations are added.

The records later came into the possession of the card manufacturer Jan Jansson from Holland . He made various modifications and reissued the cityscapes in Amsterdam in 1657 . The Civitates Orbis Terrarum by Braun and Hogenberg are highly valued by collectors today because of their artistic design. They have been published several times as reproductions ( facsimile ).

In Cologne, Frans Hogenberg bought a house in Glockengasse in 1585 , and with his second wife Agnes Lomar - whom he did not marry in church - he had five or six children, all born between 1579 and 1590. Father Frans was buried in Cologne's Geusen cemetery in 1590 . In the Flemish Mechelen or Cologne lived a few people with the name Hoog (h) enbergh, all of them engravers or painters. The specialist literature does not agree with regard to the classification of the relationships. Remigius Hogenberg is mainly classified as the brother of Frans Hogenberg, whose father was Johann Nikolaus Hogenberg. According to popular belief, Abraham Hogenberg (1608–1653) and Johann Hogenberg († 1654 in Mechelen) were two of Frans Hogenberg's sons.