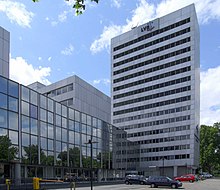 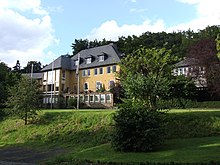 former training center of the LVR in Königswinter

The Landschaftsverband Rheinland ( LVR ) is one of the two landscape associations in North Rhine-Westphalia formed in 1953 and a corporation under public law without territorial sovereignty in North Rhine-Westphalia with its seat in Cologne . As a higher local authority association, the LVR performs regional tasks within the framework of local self-government . The area of ​​responsibility covers the northern part of the former Prussian Rhine province . In 1953, the LVR took over the facilities and tasks of the Provincial Association of the Rhine Province .

The Landschaftsverband Rheinland works as a municipal association with around 19,000 employees for the approximately 9.6 million people in the Rhineland.

The LVR fulfills tasks throughout the Rhineland in the field of disabled and youth welfare, in psychiatry and culture. It is the largest service provider for people with disabilities in Germany, operates 41 schools, ten clinics and three networks of curative educational aid as well as 19 museums and cultural institutions. He is committed to an inclusive society in all areas of life.

The LVR specifies “Quality for People” as its own leitmotif. Member bodies are the 13 independent cities and 12 districts in the Rhineland and the Aachen city region. They support and finance the LVR, the work of which is shaped by the Rhineland Regional Assembly with 124 members from the Rhenish municipalities.

Ulrike Lubek, a lawyer, has been at the head of the administration since November 1, 2010. Establishing the general principles of administration and the budget are the tasks of a parliamentary body, the Rhineland Regional Assembly .

The area of ​​responsibility corresponds to the North Rhine part of the federal state of North Rhine-Westphalia.

In the north and west, North Rhine borders with the Netherlands , in the south-west with Belgium , in the south with Rhineland-Palatinate , in the east with Westphalia . The defining river of this part of the country is the Rhine , which flows through the area from south to north. The highest mountain is the White Stone ( 691  m ), Euskirchen district , Zitterwald / North Eifel .

The lower part of the coat of arms shows a river (the Rhine) on a green background in white / silver, which flows in a southeast-northwest direction, i.e. from bottom right to top left in the picture. In the upper part is the Prussian eagle looking to the right on a white background in black, gold and white with spread wings and spread claws. The colors black and white and the eagle itself symbolize the Prussian state, to which the Rhine provinces belonged.

The originally resident predominantly Catholic population, known as the Rhinelander , is of Franconian descent.

The border between the closely related Lower Franconian and Middle Franconian (here specifically: Ripuarian ) dialects goes through the North Rhine .

The following 12 districts, 1 municipal association of a special kind and 13 independent cities are member bodies of the Rhineland Regional Council (as of May 9, 2011):

The official name is director of the landscape association , but country director is common as an abbreviation.

The LVR awards the following honors: