Eraser is a redirect to this article. For further meanings, see Eraser (disambiguation) . 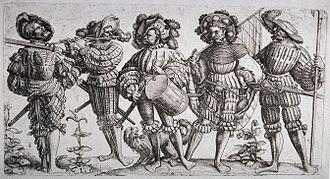 The five Landsknechte , iron etching by Daniel Hopfer from the early 16th century

For gravure printing, injuries in the form of lines or dots are inflicted on the smooth, even surface of a printing plate ( erasing ). The etching needle is used for this .

There are basically two different types of etching in terms of the production of the printing plate:

Applying an etching base . The etching ground must let the color of the copper shine through, then it has the right thickness.

The etching of a line etching with iron (III) chloride solution

The pressure plate retains its flat shape after the injury. The depressions in the plate that were created during the injury can absorb printing ink if the entire plate is colored and the ink on the smooth, uninjured surface is wiped off with a cloth or the like. By pressing on dampened paper, the ink is sucked out of the depressions and grooves and appears on the printing paper. In contrast to the high-pressure process the gravure requires the use of a rotary printing press. As a rule, the printing plate is about 1–2 mm thick.

All smooth materials that are vulnerable and do not form a firm bond with paint that is usually turpentine or water-soluble are suitable for etching:
the printing plates are mainly made of copper , often also of zinc or brass . Iron etchings (not to be confused with steel engravings !) Were made in the early days of technology, but are rarely used today. Other materials such as plastic are also used as the starting material for etchings. Modern methods of non-toxic printing use pre-coated plates that are covered with a light-sensitive photopolymer layer. The plate itself no longer has to be etched. It can be printed directly from the coating. These plates are also used in fine photographic printing processes .

Color etchings are common today. A distinction is made between the following variants:

Colored etching
Etchings that are printed in a (basic) color are subsequently colored with watercolors or colored pencils.
Color etching from a plate
In the simple variant, the printing plate is colored with different colors. Naturally, this is difficult to control and it is hardly possible to carry out a uniform print run (a certain and guaranteed number of identical copies). Stanley William Hayter and other artists in “Atelier 17” in Paris developed a special technique of color etching, which is based on the different viscosity of the applied paints and different hard and soft rollers. Any number of prints can be made from one plate (printing block), but they are always unique because of the difficult color regulation.
Multi-plate color etching
The printing of several printing plates allows precise control. The motif is transferred from the first printing plate to other plates of the same size, which then have different colors. This is achieved through various pause processes or by leaving the laid paper (printing paper) under the roller of the printing press while transferring, exchanging the already printed printing plate for an unused one and repeating the printing process. The printed image is then reproduced on the unprinted plate. The multi-plate color etching is then printed in the order from light to dark color.

Printing on colored paper
By printing on blue, black, or brownish paper with white paint, the artists mimicked drawings in chalk, silver pen, and red chalk.
Assembly pressure
If the printing plate is dismantled into different parts with the scroll saw, these can be colored separately. Then they are placed next to each other on the printing table of the press and printed.
Combination printing
By combining different printing techniques (letterpress / gravure printing) or by gluing in colored paper or metal foil, repeatable color variations are also possible.

History of the etching 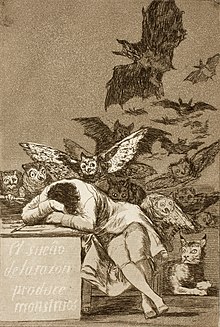 The sleep of reason gives birth to monsters , aquatint etching from the Los Caprichos series by Goya 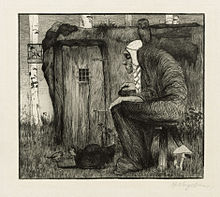 Simultaneously with the emergence of the paper mills in the 15th century, the first "prints" appeared, which were mainly made by armourers and goldsmiths by rubbing soot into the depressions of their decorations and taking impressions. This was probably used for reproducibility and documentation. The decorations were recorded in pattern books and could thus be transferred to other objects (see also chasing , steel engraving ). An early form has come down to us from Masaccio around 1400.

The first iron etchings (with vinegar and salt) in the field of armouring are known from the year 1513. However, this technique did not catch on because iron quickly builds up rust.

Albrecht Dürer (1471–1528) had completed a brief apprenticeship as a goldsmith with his father, who was a goldsmith, before he apprenticed to the Nuremberg painter Michael Wolgemuth in 1486, where he trained as a painter, draftsman and graphic artist. He perfected the copperplate engraving , made experiments with etching techniques (iron etchings) and worked with drypoint etching . His first iron etchings ( Christ on the Mount of Olives , The Great Cannon ) date from 1515, see also History of Graphics .

The elaborate manual work process, with which the lines were dug into the printing plate during copper engraving, was simplified by the development of etching, because the manual effort to create lines on the plate is now replaced by chemical etching. The wax / asphalt layer on the plate was now drawn.

Etching did not achieve the precision of copper engraving and thus did not replace this means of expression as the most important medium in book illustration, but it did expand the graphic arts techniques to include the possibility of reproducing the individual, more fluid drawing style. Matthäus Merian and Wenzel Hollar were early masters of etching .

At the beginning of the 17th century, Hercules Pieterszoon Seghers made the first etchings on copper plates. Urs Graf (Switzerland) and Daniel Hopfer (Augsburg) should also be mentioned as early artists who made use of this process . At that time, copper etching served as a "cheap reproduction technique". Various artists hired "reproducers" who made copper etchings of their works of art in order to serve the emerging market of the prosperous middle class. The prints were distributed all over Europe - also to advertise their own workshop. As a side effect of this development, artistic style developments spread very quickly in Europe.

Rembrandt reached a high artistic maturity of the etching technique and the drypoint technique . What is interesting for him is the artistic use of the plate states as “work in progress”. With Rembrandt, etching changed from a means of reproduction to an independent means of artistic expression. Because the etching lacks the "coldness" of the copperplate engraving, it was increasingly used as an independent and original form of expression by collectors of the prosperous bourgeoisie in the 17th and 18th centuries. Much appreciated in the 19th century. Rembrandt in particular served this "market" for those who could not afford his oil paintings, initially with reproductions, but very soon also with independent etched works, the formats of which were often only half a postcard size.

With the scraping technique (also known as mezzotint), which Ludwig von Siegen (1609–1680) developed, it was possible for the first time to represent gradual gray values ​​using printing technology. This was done by a very labor-intensive roughening (“weighing”) and then scraping out the brightnesses from the printing plate.

The aquatint technique , which was developed by Jean Baptiste Leprince between 1765 and 1768, replaced this laborious manual mezzotint process with a chemo-technical etching process. This made it possible for the first time to etch surfaces in various uniform gray values. Francisco de Goya and Giovanni Domenico Tiepolo used this technique. Using this technique, Goya created the erasure cycles Los Caprichos and Desastres de la Guerra (the horrors of war), which became widespread.

The heyday of etching as a reproduction technique was in the 18th century. Artists who already planned their own works as portfolios and transferred their own image drafts using printing technology were, in contrast to the reproduction engravers , referred to as peintre-graveur (also painter's eraser , painter-engraver , engraver ).

In the middle of the 19th century, etchings and engravings lost their importance with the invention of lithography , clichés and autotypes , which made it possible to print large editions in the mass-produced papers.

Freed from the burden of reproduction technology, etching developed into an independent branch of artistic graphics. Private ( bourgeois ) collectors are discovering the work as an affordable way to collect art. One of the most outstanding etchers of the nineteenth century and a pioneer of surrealism was Rodolphe Bresdin (1822–1885), who significantly influenced the painter and graphic artist Odilon Redon .

In the middle of the 19th century, artists rediscovered the charm and possibilities of etching. Exceptions are the great innovators of painting Vincent van Gogh and Paul Gauguin , who both only created one etching. Van Gogh's portrait of Dr. Gachet . The following year, Gauguin etched the portrait of Stéphane Mallarmé . Alexej Jawlensky obviously wanted to refer to his role models van Gogh and Gauguin when he wanted one of his etchings to be handwritten as “My only etching” for posterity. However, in the meantime two more etchings and five of his etching plates appeared.

Thanks to cylinder rotogravure printing, which enables millions of copies to be printed in the highest color brilliance, copperplate engraving and etching - albeit highly technical - came back into mass use in the 20th century. The majority of high-quality fashion magazines today are produced using rotogravure printing, whereby the 4-color separation in achromatic structure combines economical color application with the highest degree of color fidelity and brilliance. The rollers are either engraved with computer control (as previously in copper engraving), photo-chemically etched (as in etching) or deepened by electrochemistry.

Today too, as in Rembrandt's time, etching is popular with collectors as an independent art form, as it enables art to be collected at (re) ned prices. The number of copies varies between a few and several thousand prints, which are possible thanks to the galvanic steeling of the plate. Two specialized associations still deal with the spread of etching in Germany today: the Griffelkunst-Vereinigung Hamburg and the Verein für Original-Etching in Munich .

Like etching, copper engraving is one of the gravure printing processes . While very precise, clear edges can be achieved with the sharp incision in copper engravings, the acid attacks the metal unevenly during the etching process. It also penetrates under the edges of the top layer, although only very slightly. This creates the somewhat grainy line.

Another difference between copperplate engraving and etching is the ability to use lines. While etching with a needle allows you to work as freely as you would with a pencil, which enables immediate, spontaneous drawing, the cut of the copperplate is limited to straight or curved lines, which are either drawn in parallel or in cross layers. The lines are determined by the different tools. Drypoint and etching use a steel needle that is drawn freely over the plate like a pencil, while copperplate engraving uses a burin that is pushed away from the body and pushes, cuts or “sticks” the material out of the plate.

The distinction to copper engraving is primarily due to the different technology. Like etching, which is technically more time-saving, copper engraving was used as an inexpensive reproduction technique that allowed large editions as early as the 16th century.

The manual processes are - due to the time-consuming and labor-intensive workflows - today a rather elitist graphic technique that is practiced by many artists because of their independent graphic effects and the possibility of inexpensive small editions.

Etching is one of the most varied artistic printing techniques. Since the first prints were made in the gold and armories of the 15th century, numerous different methods have been developed: