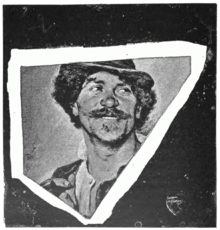 First attempt of Meisenbach's autotype based on the patent documents 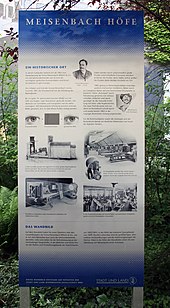 The autotype ( German about self- writing ), in German also known as net etching , is a photographic and chemical reproduction process developed by Georg Meisenbach in Munich around 1880 for the production of clichés as a printing form for letterpress printing . After letterpress printing was replaced by offset printing , autotypes are rarely used today.

The autotype was recognized on May 9, 1882 as the German Reich patent number 22244. This goes back to an application from the Autotype Company in Munich . Georg Meisenbach, who improved the process he had developed in 1881 and 1882, is to be regarded as the inventor. In 1884 his business partner, the Munich architect Joseph von Schmaedel , succeeded in constructing a ruling machine that could be used to engrave fine grids on glass.

The first autotype in the daily press appeared in the United States on March 4, 1880 in the New York Daily Graphic (other sources cite January 21, 1879 and the New York Tribune ). In Germany, the first screened photo, a picture of a statuette as a "gift of honor to the 2nd Bavarian Infantry Regiment Kronprinz", appeared on March 10, 1883 in the Illustrirten Zeitung , which was published in Leipzig. The autotype replaced the manually produced wood engraving when reproducing illustrations using halftone templates, especially photos.

The image is broken down into individual raster points using a cross-line raster that is attached to the recording material (film, plate with steep gradation) in the reproduction camera, which converts the photo to be reproduced or other halftone original into a raster negative. This screen negative is copied onto a metal plate provided with a photosensitive layer (generally a 1.75 mm thick zinc plate). The later raised (= printing) parts are protected by the acid-resistant layer that has hardened during exposure. In a bath with diluted nitric acid, only the non-printing parts are etched deeper - the "covered", higher-standing printing image parts are later inked with the ink roller during printing with each revolution of the printing cylinder of the letterpress press , before the paper is then between the "cylinders" and "printing form" is carried out. The size of the grid points fluctuates depending on the light or dark parts of the image, but technically also depending on the grid width (this is the number of grid points that fit next to each other on one centimeter). As a rule, a coarse grid (about 36 to 48 lines per cm) is used for printing on rough paper (newsprint / natural paper), and a fine grid (about 60 L / cm) for fine papers (art print / picture printing paper). There are also plastic autotypes that are produced using the washout process.