However, there are also printing processes without a printing form, which belong to the so-called NIP processes . 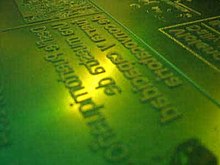 Book printing, invented by Johannes Gutenberg around 1450, is the oldest printing method in Europe and for almost five centuries was the only usable method for the mass production of printed matter. The printing form initially consisted of innumerable individually arranged types or letters, which were combined with bars , book decoration elements and woodcuts to contain text and graphics.

The stereotype is a further development of the letterpress form . It is a metal duplicate and is created by molding using a die into which a metal alloy is poured. In this way, instead of the printing form consisting of individual letters, a plate is obtained from one piece. Curved stereo plates were used in rotary printing presses for newspaper printing until the 1970s .

With the invention of the autotype it was possible to print rasterized black and white and color images in letterpress printing. A wax impression was made from these screened zinc clichés , which received a thin galvanic copper coating. The so-called galvano was filled with typometal and you received a detailed image of the original cliché. This method was preferred for quality prints.

Since the 1970s, book printing has gradually been almost completely replaced by the more economical offset printing .

Aquatint by Karl Bodmer 1841. The town of Traben-Trarbach and the Grevenburg on the Moselle.

In gravure printing, printing forms are used in which the printing areas are recessed while the non-printing elements are at a constant level. The entire printing form is flooded with ink before printing and the excess ink is then removed with a squeegee . The transfer of the color to the paper takes place under high pressure. Gravure printing includes rotogravure as a commercial application and a number of artistic techniques such as etching , aquatint , copperplate engraving, and steel engraving .

In rotogravure printing , the printing form consists of a steel cylinder of considerable weight on which there is a thin surface layer of electroplated copper. The printed image is chemically etched or electronically engraved into this thin copper layer in the form of tiny cells. Finally, the copper layer is also chrome-plated in order to achieve better durability for longer runs. After printing, the thin copper coating is peeled off to reuse the steel cylinder.

Depending on the size and depth of the cells, a distinction is made in gravure printing between the conventional variable depth and the modern variable depth and area processes. In the conventional method, the cells are the same size, but different depths. To create the cells, a positive film with the print image is copied onto evenly rasterized pigment paper . The pigment paper has a coating of gelatin and color pigments , which is made photosensitive with potassium dichromate . After exposure and development, a gelatin relief is created that is transferred to the printing cylinder. After the paper has been peeled off, the gelatin relief remains on the metal and is deeply etched in a multi-stage etching process. However, conventional gravure printing has lost a lot of its importance because the production of printing plates cannot be standardized. For this reason, the electronically generated gravure form with variable depth and area has established itself in practice.

Engraving with a diamond graver has gradually been replaced by faster and more precise laser engraving. This can also optimize the cell shape, so that frequency-modulated printing grids and edges without a sawtooth effect are possible.

Lithography stone with the logo of the Hoffmanns strength company

In the 19th century, lithographic printing was the only printing process that allowed larger editions of colored printed matter. It was based on an invention by Alois Senefelder from 1798. A limestone slate that was quarried in Solnhofen in Bavaria was used as the printing form . The drawing to be printed was placed on the stone by the lithographer with ink or chalk and transferred to paper in the lithographic press. However, the drawing on the stone could not be printed without preparation. The lithographer and the lithographer called this chemical process etching . The properties of the grease-friendly, printing parts should be reinforced and the non-printing parts of the stone should remain grease-repellent and water-absorbent. The etch consisted of a mixture of nitric acid , gum arabic and water and optimized the compressive properties of the stone. In addition to specialist knowledge, a lot of experience is required for this activity. This is why artists today have their lithographs treated by an experienced lithographer on a commission basis in order not to endanger the result of their work. 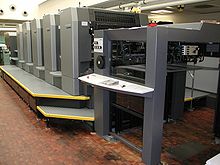 In the early 20th century, the principle of lithography was further developed. A process was discovered in which a thin metal plate could first be printed onto a rubber surface and then onto paper. As the soft rubber blanket adapts to the surface structure of the printing material, rough papers can also be printed. The flexible metal plates were initially made of zinc , later multi-metal and aluminum plates .

The transfer of the print image onto the plate takes place from reversed positive films onto a thin, light-sensitive layer with which the plate was previously coated. The exposure under the copier lamp decomposes the coating and the now soluble, exposed areas are washed out during development. The right-sided print image is created on the plate, which has to be optimized for printing in a similar way to lithographic printing. 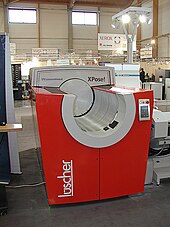 Collotype is used today exclusively for artistic print products with very small editions. The support of the printing form is a 10 mm thick, matt-etched glass plate with a light-sensitive emulsion layer made of chromate gelatine. A photographic halftone negative, usually a color extract from the original, is copied onto the plate under UV light . During the exposure process, the chromate salts contained in the gelatine change the water solubility of the gelatine and create a gelatine relief . This process is known as the tanning of the gelatine and a so-called wrinkle grain is created instead of a grid as in other printing processes. After copying, the plate is immersed in 5 ° C to 10 ° C cold water, which washes out the chromates so that further exposure is prevented.

In the case of color reproductions, a printing form per printing color must be created for each color separation . For facsimile prints of works of art you need up to 20 plates, which when printed on top of each other achieve an unmatched fidelity to the original.

The best-known screen printing process is screen printing or serigraphy , in which the printing ink is pressed through a fine-meshed fabric onto the material to be printed with a wiper-like tool, the rubber squeegee .

The printing form for screen printing consists of a frame that is covered with a fabric made of metal or plastic. The stencil on the fabric contains the printed image. For simple, flat printed matter, manually created templates are used and attached to the underside of the screen. A light-sensitive photopolymer coating is used exclusively for raster work and multi-color prints. After the screen has been coated and dried, a correct-sided positive master copy of the print image is exposed onto the screen under UV light. The UV light hardens all transparent areas, but the image areas themselves remain soluble and are removed with water in a development process. Defects can be removed with a screen filler.

Screen printing is mainly used in advertising and lettering, textile and ceramic printing and for industrial applications.